Details
In Defence of Marxism
14 October 2009

Supporters of the International Marxist Tendency in Morocco have just published the first edition of their paper, The Communist. Here we provide a brief explanation of the contents and also make it available online for any reader who wishes to download it. 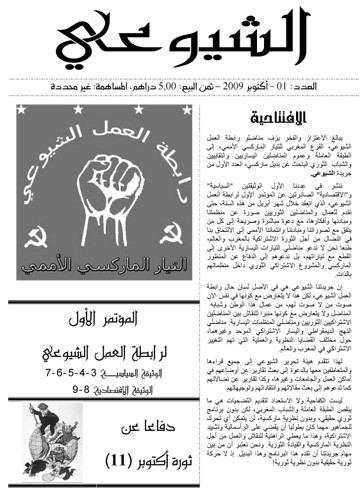 “ ‘The Communist’ is first of all the organ of the Communist League of Action (CLA) but at the same time it is the voice of those who have no voice: the workers of this country and the young activists. It is also a forum of discussion between revolutionary socialists and activists of left organizations like the Democratic Way, the Socialist United Party and others on theoretical and practical questions related to the socialist transformation of society in Morocco and in the world”. This is how the editorial of this historic issue starts.

Furthermore, it ‘invites all those who agree with our ideas, principles, and internationalist affiliation to join us in our struggle and defend a Marxist perspective within their organizations”

This first issue of the paper contains articles about the founding conference of the Communist League of Action and a summary of the discussion on political and economic perspectives for Morocco and the Middle East. Another article retraces the history of the CLA since it was first established and then there is a report of the participation of a Moroccan comrade at the world conference of the IMT. ‘The Communist’ also publishes a letter from Alan Woods congratulating the Moroccan Marxists for joining the International Marxist Tendency. A final article takes up the defense of the October revolution.

By publishing this paper the Moroccan Marxists have taken a new step in consolidating their base amongst left activists, especially amongst those who, as young ‘natural leaders’, have already organized the massive wave of spontaneous demonstrations against the Israeli attack on Gaza at the beginning of the year. The website Marxy.com has already become a real beacon for left-wing activists in the Arab world thanks to years of systematic and determined work. This paper, besides the many pamphlets produced by our comrades, will give us tremendous opportunities to build a serious force amongst the working class and the youth in Morocco. Long live ‘The Communist’. Long live the IMT!