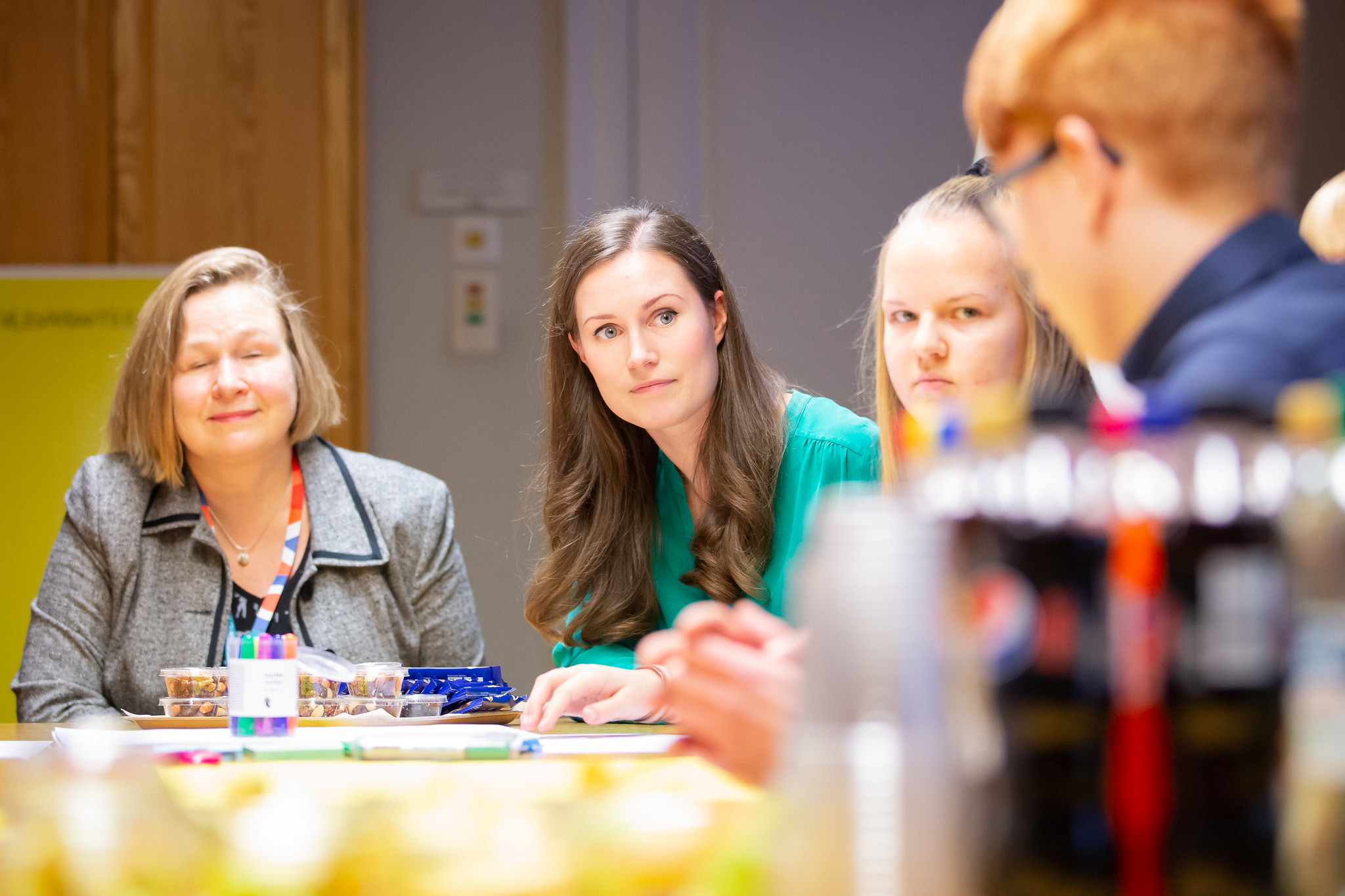 The Finnish government, led by Social Democrat PM Sanna Marin, faced a challenging spring even before the global crisis caused by the pandemic. Hailed as a left-winger and a radical reformer by liberal outlets and the international media upon taking office, her coalition government includes centre-right parties on the same platform as her predecessor Antti Rinne. She has already withdrawn her earlier stated support for reforms such as a six-hour workday and a four-day work week.

Sanna Marin had aired her personal support for such measures during a panel debate in the capacity of Minister for Transport, but they are nowhere to be seen in her government policy. Both the composition of her government, the parliamentary power balance, and the economic situation seen within the limits of capitalism, render any wide-ranging social reform initiatives by the government practically impossible. Thus, the class struggle has continued to be concentrated in the industrial field.

Assuming office on 3 December 2019, after a government crisis triggered by a spectacular strike movement forced Rinne to resign, the Marin government was facing continued industrial unrest during the collective bargaining season. After the postal workers successfully defended their contract through securing sympathy strike action from vital sectors, including most of the transport sector as well as electricians, municipal workers as well as others, a new round of strikes took place in February involving the crucial forest and paper industries and the civil servants.

These strikes were also successful, resulting in a 3.3 percent pay rise and the removal of the hated “kiky"-rules, which forced workers to 24 hours of annual unpaid overtime in the name of strengthening Finnish competitiveness on international markets. Further strikes were planned for the beginning of March, but were cancelled after the employers backed down and agreed to the terms of the workers’ movement. In other words, the working class has been on the offensive and secured certain victories, laying the basis for further struggles. However, the political leadership has failed to channel this into any real socialist parliamentary alternative.

The political background: sharp polarisation and the Finns Party

A long period of austerity and cuts under different government constellations has led to a sharp political polarisation in Finland. Due to the complicity of the workers’ parties, the Social Democrats and the Left Alliance in administering austerity politics, this has so far been manifested mainly in the growth of the right populist, racist Finns Party. Originating as a successor to the Finnish Rural party, dissolved in 1995, the party had a parliamentary breakthrough under the leadership of Timo Soini in 2011, becoming the third-biggest party and gaining 39 seats on an anti-establishment, anti-immigration and anti-EU platform.

The racist, right-wing Finns Party has made ground as successive governments (including the left) carried out anti-worker policies / Image: Arto Alanenpää

During the so-called “Sixpack” coalition government, led by the liberal conservative National Coalition party but also including the Social Democrats and the Left Alliance, which was in office 2011-15 and carried out enormous budget cuts, the Finns Party managed to portray itself as the popular opposition. However, in 2015 the party entered a pure right-wing government together with the National Coalition party and the Centre party, and its support began to rapidly decline as it was exposed as another right-wing, pro-austerity outfit.

However, in 2017, after Timo Soini resigned as party leader, the more radical and openly racist faction secured control of the party, provoking a split with the more moderate, purely populist elements, including 20 MPs who went on to form the Blue Reform party, which remained in the government. With some other MPs continuing as independents, the Finns Party was reduced to 15 MPs. But once more in opposition, with the refusal of the workers’ parties to adopt fighting socialist policies, the support for the party began growing anew.

The most recent election in April 2019, saw a defeat of the right-wing government, but also left the workers’ parties with no parliamentary majority. This led once again to the typically Finnish formation of another broad coalition government – Finland has no tradition of minority governments. Social Democratic leader Antti Rinne invited the Centre party, Swedish People's Party of Finland, the Greens and the Left Alliance to join his government.

That the right-wing Centre party received the post of Finance Minister revealed the commitment of the new government to the pro-capitalist status quo – there was not to be any left turn in Finnish politics. Katri Kulmuni of the Centre party retains this post also in the government of the supposedly more radical Marin. This situation, with the workers’ parties in government on essentially a right-wing platform and in cooperation with the centre-right, and the absence of a credible socialist mass alternative to the left, creates the basis for further successes for the populist right.

Finland and the Corona crisis

The current explosive situation sparked by the coronavirus crisis will act as a litmus test for the new government, and quickly reveal its allegiance to the interests of capital before those of the working class in a crisis situation – in fact, this process has already begun. On 16 March, the Marin government declared a state of emergency, an action not taken since WWII, closing the borders for passenger traffic and shutting down schools and libraries.

But fundamentally, the actions taken by the government in response to the crisis aim above all to protect private profits and keep companies afloat no matter the cost. Initially, a subsidy package of 5 billion euros for the companies was announced. On Friday 20 March, this was extended to 15 billion. Companies will be granted loans by the state-owned finance agency Finnvera, and the state will then back up the loans when the companies lack the funds to pay them back. Companies will be excused from paying taxes or employee retirement fund fees over the summer.

Meanwhile, no proposed actions or reforms were announced to protect the most vulnerable victims of the crisis: the workers that now risk losing their employment and housing due to business cuts, not to mention the thousands already homeless or dependent on the bread lines for food, thus unable to follow the guidelines for self-isolation to protect themselves from infection. Quite the opposite, the government reduced the 14-day notice for forced paid leave and layoffs to five days, as one of the steps to make it easier for employers to tackle the coronavirus crisis.

It is ironic that the government has now announced that keeping control of public debt is no longer a priority due to exceptional circumstances – now that the companies “have to” be bailed out – while this was never considered an option when the previous governments, also including the Social Democrats, viciously butchered the welfare state. And there was of course never any doubt about who ultimately will be held accountable when the state finances are to be rebalanced: it will not be the billionaires who own the means of production, but the working class.

Cuts on the way

Already, at the time of writing, with the pandemic yet to even hit Finland with full force, the right-wing opposition is howling for austerity measures to pay the bill. In an interview on 4 April, National Coalition Party leader Petteri Orpo and Sari Essayah of the Christian Democrats demanded that the government scrap its intended and partially implemented meagre reform package of 1.2 billion euros, which includes slightly increased funds for the welfare sector and pensions, among other half measures meant to signal an intention to patch up the social fabric after a long period of austerity. Jussi Halla-aho, leader of the Finns Party, said that proposed reforms to protect jobs and the environment will now be impossible to support. 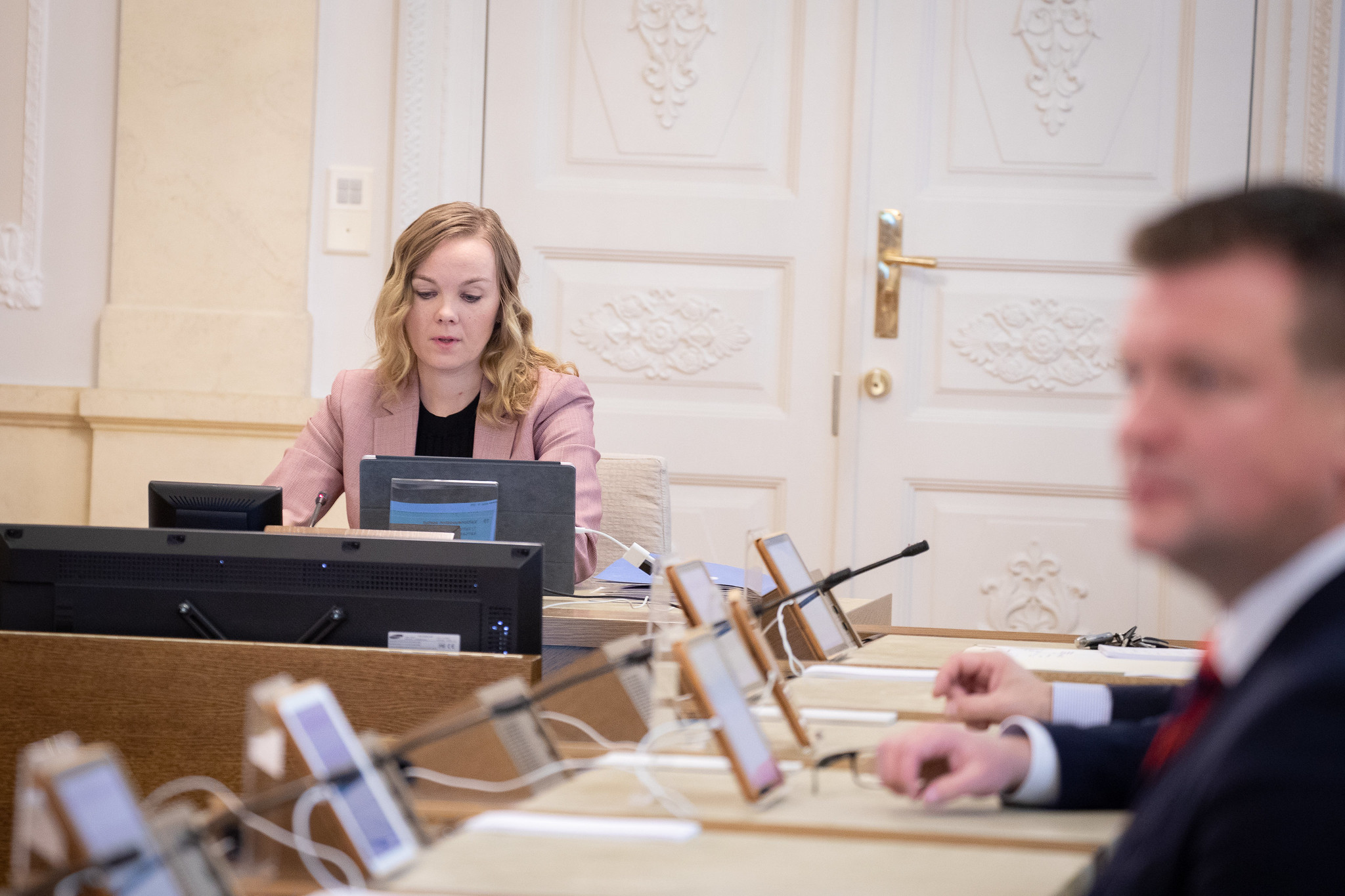 Finance Minister Kulmuni said the government’s reform programme must now be rewritten, and so-far unspecified cuts will be necessary in the post-pandemic period / Image: FinnishGovernment Flickr

Finance Minister Kulmuni was quick to agree that the government’s programme must now be rewritten, and that so-far unspecified cuts will be necessary in the post-pandemic period. She was immediately cheered on by the leader of the parliamentary group of the Swedish Peoples’ Party. While the Left Alliance vice chair Jussi Saramo and some on the left of the Social Democrats have instead demanded Keynesian stimulus measures to “restart” the economy, and have also pointed out that cuts should be avoided in a situation when demonstrating and protesting is practically forbidden, the government is split. In this situation it is extremely doubtful that Prime Minister Marin, even if she was the radical figure she has been made out to be, would be able to resist the joint calls from the right and her right-wing coalition partners to make the workers pay.

The union leadership has so far accepted the government's course of action without putting forward any demands of their own. However, as the latest period has shown, it can be forced into action by the mounting pressure from below. The already radical mood among the workers will sharpen enormously as a result of the coronavirus crisis and the inability of the capitalist system and its political representatives to respond effectively to protect the people and their jobs. Previous cuts in health care, and the general “free market” and austerity-based orientation of all political parties in the recent decades will be brought into question by wide layers, while the working class will increasingly become aware of its power as a social force.

As in other countries, the question of workers’ control over industries will be raised when the organised workers begin to question a situation where they are forced to continue risking their health and lives, while the bosses are able to save their own necks.

The coming global recession and struggles

The coronavirus pandemic has become the trigger for a new worldwide recession, which was already in the making long before, as the capitalists have responded to the accumulating crisis of overproduction by inflating the credit sector. Finland, as an export-based economy and a member of the eurozone, will soon be heavily affected by the new global downturn, causing the stock markets to plummet.

As the government is not likely to take adequate measures to protect the workers affected by the crisis, who will instead be expected to bear the economic burden of it, we are facing an explosive situation, in which a mass party with radical socialist policies could easily harness the discontent, set the political agenda and lead the working class to victory.

In the short term, however, due to the lack of such a party, the Finns Party could make gains. The pro-corporation, anti-worker policies of the government will undermine the authority of the left, and the right-wing demagogues could step into this vacuum temporarily, by pretending that they offer a solution. But as the class struggle continues to unfold and the working class will be forced to fight back, the Finns Party will be exposed for being nothing but another bosses’ party. Meanwhile, the industrial struggles of the workers will eventually lead to the political front as the workers will be looking for a vehicle to push for their interests and demands. In such a situation, huge opportunities will open up for revolutionary Marxists.

Thus the crisis can, to paraphrase Leon Trotsky in the Transitional program, once again be reduced to the crisis of the revolutionary leadership. Join the IMT today and help us build a revolutionary organisation capable of intervening in the coming struggles!