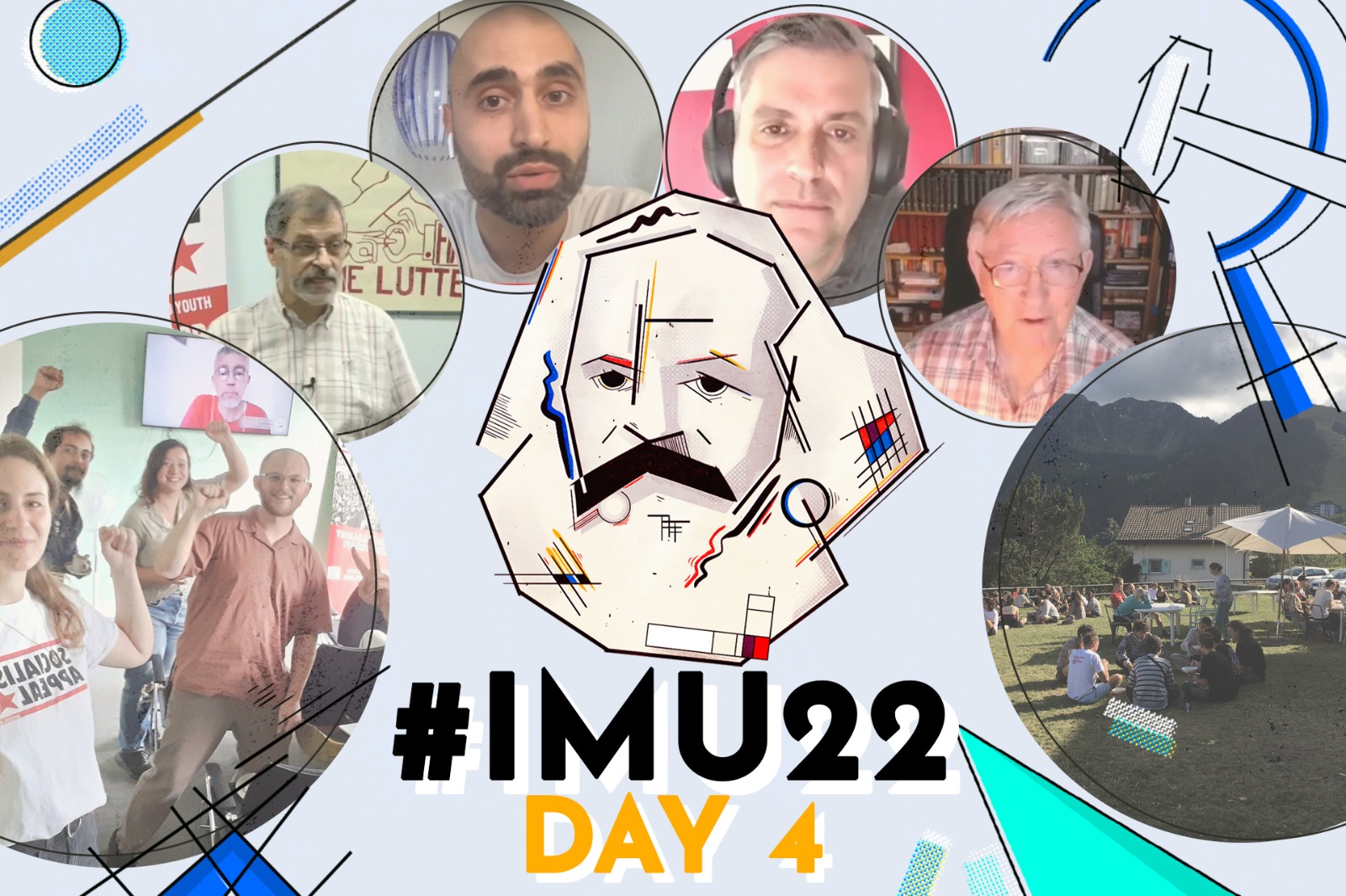 We have reached the final day of the International Marxist University (#IMU22) – and what a four days it has been! With every end comes a new beginning, and with comrades around the world now armed with the sharpest Marxist ideas around, the next step is to carry them with confidence to the youth and workers’ movement.

The inspiring strides that comrades all around the world are already taking in this direction was covered excellently by Hamid Alizadeh and comrades from various national sections of the International Marxist Tendency in the inspirational final session ‘Building the revolutionary party’. But this was not before we had heard three more inspiring and educational talks, on ‘Dialectics of nature’, ‘The second American revolution,’ and ‘Marxism and the family’.

As Ben Curry pointed out in the session ‘Dialectics of nature: Marxism and modern science’: “A revolutionary party above all needs a philosophy.”

By contrast, dialectics explains that the only constant in nature and society is change itself. Using examples from biology, chemistry and physics, Ben showed how the progress of natural science continues to validate the philosophy of Marxism.

But under capitalism, we are seeing a growing trend towards mathematical idealism, exemplified by the creation myth of ‘Big Bang’ cosmology. As Daniel from Britain and Ilias from Greece explained in the discussion, other fields from cognitive science to biology are also being infected by the reactionary moods emanating from the decaying capitalist class.

Enjoying the session of philosophy

The best thing of this year i did is not finals of master degree from UOk but the #IMU22 from international Marxist tendency#longliveprolteriatrevoltuion #nowsocialism pic.twitter.com/l0fbG2GlGe

Meanwhile, Pascal from Britain explained how scientists are daily dragged down by the market like a ball and chain, whilst Jon from the Spanish section of the IMT explained how capitalism is likewise squandering the great technological advances in IT and other fields. As Pascal stated:

Oppression, inheritance and private property: Marxism and the family

Contrary to anthropological teachings today, the patriarchal family has not always predominated in society.

In fact, if we look at the pre-history of humanity, we find equality between men and women. So how have we gone from this to class society, the oppression of women, and the family structure we have today?

As Fred Weston explained in the session, ‘Oppression, inheritance and private property: Marxism and the family’: “The origin of women’s oppression is not capitalism but much further back in time: in the early class differentiation of society. It starts with private property – that is, back thousands of years…”

Engels stated, in his classic work Origins of the Family:

“The overthrow of mother-right was the world historical defeat of the female sex. The man took command in the home also; the woman was degraded and reduced to servitude, she became the slave of his lust and a mere instrument for the production of children.”

- if you fight for the expropriation of the ruling class - you are a revolutionary
- if you express yourself in an "alternative way", but support the market economy - you are a reactionary
Fred Weston #IMU22 pic.twitter.com/xxACYAEwh7

The Marxist approach to the question of the origin of the family and the oppression of women is of course subject to much criticism and distortion. Several of these criticisms were dealt with by comrades in excellent interventions.

Marissa Olanick from Canada also addressed the relatively recent calls from some feminists for ‘wages for housework’. What seems like a ‘progressive’ demand is actually far from it: “Wages for housework would only provide more incentive for women to stay in the home. And in doing so, remove themselves from public life.”

“Engels wrote that one of the progressive things about capitalism was that it pushed women into the workforce. That is, it made women active members of the class that has the power to run society, instead of just an adjunct to it. This lays the basis for the true equality of women.”

The US Civil War: the Second American Revolution

The American Revolution of the late 18th century was followed by an even greater, and bloodier, revolution in the 1860s.

Usually presented as the American Civil War, it was in reality a revolutionary conflict between the historically progressive industrial capitalism of the North, and the plantation and slave-owning counterrevolution of the South.

As John Peterson stated in the session ‘The US Civil War: the Second American Revolution’: “the [US] is more fractured and polarised than at any point since the American Civil War and Reconstruction.”

“Just as the divergent class interests of the pre-Civil War years could no longer be contained within the old social and political framework, the interests of the capitalists and workers cannot indefinitely coexist in the doubly antiquated parameters we are forced to live in today.”

Terrific analysis by John Peterson of the US Civil War: the Second American Revolution at the International Marxist University 2022.#IMU22https://t.co/dBKuz8J67q pic.twitter.com/NXuO3nETFX

Comrades made some excellent interventions on what John pointed out is an extensively studied period of history. Ben Gliniecki, from Britain, explained that the second American revolution brought about dramatic changes to the state machinery in the USA. And as Marx explained, all revolutions prior to the proletarian revolution serve to perfect the state machine as an instrument of the rule of a minority over the majority.

“We should understand how the bourgeois state has developed, so that we can unmask it as a weapon in the hands of the ruling class. That’s what will give us the conviction we require, not to reform it, but to smash it and replace it with a workers state.”

So, after four days of steeling ourselves in Marxist theory, what now? Trotsky once said: “Ideas without organisation are like a knife without a blade”. We may have the best ideas, but as Hamid Alizadeh pointed out in the session ‘Building the Revolutionary Party’:

“In order to carry out our ideas we must build a powerful organisation that is capable of gaining the ear of the working class. And that must be our number one priority in all of our activities.”

In recent years, the IMT has made significant strides forward towards building such an organisation. Since January 2020, just before the pandemic, the membership of the IMT has grown by over 46 percent. Today we have sections and groups in 35 countries and contacts in dozens more.

Our international website, marxist.com, has had 6,182,377 pageviews since the summer of 2020. And of course this event itself represented an important milestone in building the forces of Marxism worldwide. By the closing session, an incredible 7,333 people had registered…from 141 countries! And the proof of the commitment and seriousness of comrades attending was the magnificent financial collection, which raised over €825,000!

These are astonishing achievements. No other tendency is able to do this. And the reason is political: it is rooted in the ideas and our conviction in our struggle.

But we cannot rest on our laurels. In every country revolutionary developments are approaching rapidly. And the fact is that we are still, as yet, too small to be able to make an impact.

Therefore, the primary task that we face, which must be the focus of all comrades in all our work, is to grow: by turning energetically towards the most radicalised youth on the basis of Marxist theory. There has never been a better time to be a Marxist!

Swiss comrades using time before sessions start to learn the Internationale in French (and other songs). This is fun and helps us grow as a national organisation, beyond linguistic borders. #IMU22 @derfunke_ch @letincelle_ch @marxistcom pic.twitter.com/qy8C052XXO

The school was brought to a rousing close by comrade Alan Woods – although, as Alan stated: “The school is not finished, it never will be finished, until the working class take power.”

Speaking of the recent stirring events in Sri Lanka, Alan pointed out one thing they prove beyond all doubt: that when the masses lose their fear, no amount of repression can stop them. And there is a power in society, a power in the masses – once it is organised and mobilised to act – which is stronger than any state, any police force, any army in the world.

Comrades of the Pakistan section are pointing in their country to a similar social explosion as in Sri Lanka. But in Pakistan we have a fairly sizable organisation, with experienced comrades and a good leadership. And this is what is missing around the world: the subjective factor.

From all over Pakistan, comrades are attending the final day of #IMU22 with great revolutionary spirits. pic.twitter.com/j4WunRkJOR

“Think of the millions of ordinary people in the present world who are in a state of despair when they look around,” Alan said. “Everywhere they see the world is collapsing. They think the world has gone mad. It's like being in a dark cave with no exit.”

But the ideas of Marxism light the path forward. They provide us with a means to understand why capitalism is racked with crisis, and offer a guide to fight for a better world. As Alan said: “When we witness the death agonies of such a rotten and barbarous system of oppression, what a privilege it is to be able to play an active role in its overthrow.”

That is the task before us. Join us in this fight to win the future!