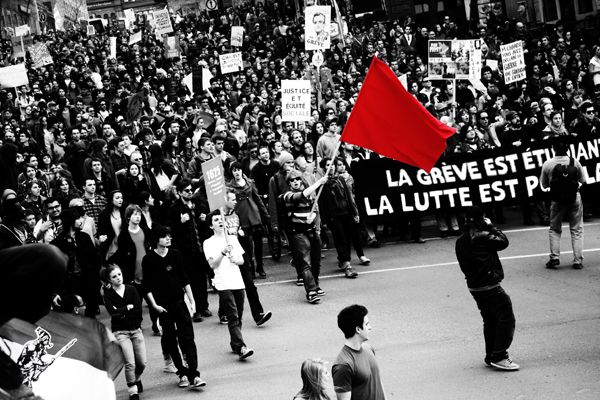 The fantastic 12-week long Quebec student strikes mark a new stage in struggle in the Canadian state. However, while this outburst is new for Canada, it is merely the continuation of the international movement against austerity which we have witnessed: the Greek general strikes, the indignados movement in Spain, Wisconsin, the Occupy movement, the inspiration from the Arab revolutions, etc. A victory for the Quebec students is a victory for all workers and youth, both in Canada and around the world, and it is vital that everything possible is done to assure its success and draw out the necessary lessons.

[Also see the websites of Fightback and La Riposte]

The attacks on students in Quebec (and elsewhere) are not the result of the whims of this or that politician. If that were true, then it would be an isolated phenomenon rather than a widespread tendency across the globe. The attacks are part and parcel of a generalized attack on workers, youth, and other oppressed sectors that, at its root, comes from the crisis of the capitalist economic system itself. Simply put, the capitalists cannot afford the meagre concessions won by the working class in the post-war period and are attempting to redress the balance in their favour. This manifests itself as attacks on the social wage, attacks on public sector workers and social services, attacks on immigrant rights and youth, and attacks on the right of workers to organize and strike.

The bosses themselves understand the general significance of this struggle and are imploring their representatives in government not to back down. In an editorial in the Montreal Gazette, titled “The choice is democracy or mob rule,” they state, “Any ‘social peace’ [the government] would buy from the students would not be permanent, because every other interest group opposed to future austerity measures would see that not only the present government but the society it represents can be intimidated.” (28 Apr. 2012) They see the austerity as essential and therefore the students must be crushed.

Allegations of violence are completely hypocritical on the part of the directors of police and economic violence against students and workers. It is also understandable that some youth will lash out after their demands have gone unheard for so long. In no way can breaking a window be equated with the mass institutional violence of the system. However, we do not believe such individual actions serve to further the struggle. We support the democratic right of the movement to collectively determine the degree of confrontation with state forces that is necessary to further the struggle. This choice should not be imposed on people without their consent — indeed, the only way to successfully take actions of self-defence is with the mass support of the mass movement. We believe that the student unions should organize elected and accountable self-defence committees to protect demonstrations from state violence, and maintain the democratically agreed-upon tactics of the movement.

Currently, the movement is at an impasse. The government will not yield and the students will not leave the streets. This situation cannot last indefinitely. The task is to spread the movement to the wider working class. This is vital because, as we have shown, this struggle is merely part-and-parcel of an austerity plan that will affect all workers.

CLASSE has issued an appeal on its website for a general “social” strike. This is a real step forward but there needs to be a concrete plan to make it a reality. Neither the workers themselves, nor their organizations, can be ignored in planning this action. As a beginning show of strength, the union federations must call a 24-hour general strike in support of the students and against austerity. Student union representatives must make this a key issue at every public appearance. Students must send delegations to every union meeting to lobby for this demand. However, if the workers themselves do not understand the aims of the struggle, the movement will falter. The CSN has called for symbolic pickets; this is a fantastic opportunity for students to go to the workers and explain the need for a general strike and solidarity action as this struggle affects us all. In May 1968 in Paris, the students set up student-worker solidarity committees to go to the workplaces and discuss with workers. Many times after these discussions (and with the aid of sympathetic shop stewards), the workers decided to drop tools in solidarity with the students. Eventually the workers started striking for their own demands too. This lesson from 1968 needs to be put into practice now!

In addition to spreading the student strike to workers, it is also necessary to spread it across national boundaries. There has been a disgusting conspiracy of silence about the strike from the English Canadian mass media, only to be followed by an equally abhorrent focus on the “violence” of the students. The Canadian student and labour movements cannot allow this corporate-promoted national divide to persist. Indeed, the bonds of solidarity are being forged in struggle. Solidarity demonstrations have been organized in Toronto and other cities; unions in English Canada have donated tens of thousands of dollars to the cause. CLASSE has taken the correct approach and has sent out an appeal and model resolution to Canadian unions calling for support, solidarity pickets, and invited speakers. Quebec students are not alone.

However, solidarity does not just run in one direction. Canadian students have a great-great deal to learn from the movement in Quebec. In the rest of Canada, tuition fees are more than double of those in Quebec. This criminal fact has been constantly used as an argument against the Quebec students. The student movement in English Canada needs to start fighting with the same degree of radicalism as in Quebec. The Canadian Federation of Students (CFS), the main representative of English Canadian campuses, needs to begin planning for mass demonstrations and strike votes, using the Quebec events as in inspiration. We need a generalized struggle that makes all parts stronger rather than the divide-and-conquer methods of the bosses.

Above all we need to enshrine the principle that education is a right and not a privilege. Education must be free and accessible to all! Some will say that the system does not have the money to afford this. We reply that if they have billions for fighter jets, prisons, corporate bailouts, and tax cuts, then there is the money to provide free education. We state that education is a right and if capitalist society cannot afford this right then it is capitalism that must be done away with. They say they cannot afford decent wages, jobs, services, and conditions; meanwhile, productivity increases and the rich become richer. By their own actions the bosses are condemning their system. Combined with the fight for free education and decent conditions for the working class must be a fight for a socialist society that can provide these things on an ongoing basis. The problem is not the “neoliberal” ideology of the bosses; it is the crisis of the system itself!

Finally, we call for the unity of all the best fighters — the class-conscious workers and courageous youth — in every part of the struggle in every part of the world. As we stated in our introduction, the Quebec student struggle is just one component part of a wider international struggle against capitalist austerity, crisis, and war. Workers and youth will be far more prepared to win these struggles if they are fighting together, sharing experiences, and learning from the struggles in other sectors and countries. From Greece, to Egypt, to Venezuela, to the USA, to Canada — we need to build an International Marxist Tendency to unite workers and youth. Join us!

Victory to the Quebec students!

Spread the struggle to the working class!

For a 24-hour general strike against austerity and for the students!

Quebec students are not alone!