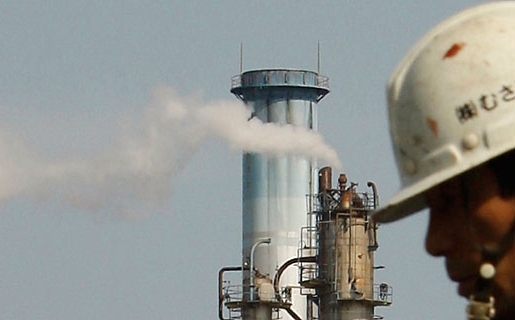 The Danish Marxists of Socialistisk Standpunkt produced this leaflet for the climate change demonstration on Saturday in Copenhagen, in which they explain the need to combine the struggle with the need for the socialist transformation of society, for democratic planning of production according to the needs of working people and not profit.

All politicians and heads of society are talking about saving the climate. But it all remains just words. When it comes to action, things are moving in the opposite direction. We have seen how one big workplace after another with climate friendly technology has announced mass sackings or closures. We only have to mention Vestas, Siemens or the Danish shipyard at Lindø.

A question of class

Some people argue that in questions about climate and environment “we are all in the same boat”. This is not true. This question – as all other important questions – is a question of class interests. It is the ruling class who benefits from pollution as long as it provides a profit. It is the working class and their families – the big majority of society – who have an interest in making sure that production, construction and transport is planned in a responsible manner.

Profit: a threat to the environment

It is sheer madness to shut down hi-tech and climate-friendly production. In many cases, production is moved to countries in Asia, where production is on a lower technological level and with greater costs for the environment – but the wages are lower and the profits somewhat bigger. In other cases, production of wind turbines is shut down due to “lack of demand”, although they make handsome profits. In all cases, profit is the determining element. Questions about the entire planet’s climate are decided on the basis of a small group of non-elected shareholders’ concern about how best to make a profit from other people’s labour. This is not an accident – this is the way the capitalist “market economy” works. As long as the economy is run this way, things will never change. Under capitalism, profits come before the environment.

Capitalism is the problem

It is a paradox that while humanity has never had better means at its disposal to solve all its problems, we still face the biggest crisis in the history of our species. Humanity has at its disposal sufficient technology and means of production to eradicate hunger and diseases such as malaria and tuberculosis, which every year kill millions of people. Humanity has excellent technologies in the fields of solar energy, wind energy, water power and a promising potential in the field of fusion energy. The only thing hindering this potential from becoming a reality in all fields is the fact that production and research is managed for profit instead of what is best for society. Capitalism is blocking the way for humanity to solve its problems.

Politicians in the whole world can reach as many agreements as they wish; they can write all the papers they want. This will never help combat climate change. They don’t control production, and one cannot control what one doesn’t own. The only thing that can make a difference is if the biggest and most important companies in the world start climate-friendly production under a democratic plan. This can never happen as long as the economy works according to capitalist anarchy. It can only happen if big business is taken over by the state and driven by a democratic, socialist plan. A part of such a plan will include a massive development of environment-friendly technology. This will not happen by itself; it can only happen if we are active in the labour movement to pressure the workers’ parties to take up the demand of nationalization of big business.

We need an international organisation of struggle for socialism and climate-friendly production. The International Marxist Tendency unites class fighters from around 40 countries all over the world, including Denmark, Sweden, Germany, Poland and Britain. Sign up for a subscription to our paper and contact us to take part in our activities.

[Read this leaflet in Danish.]