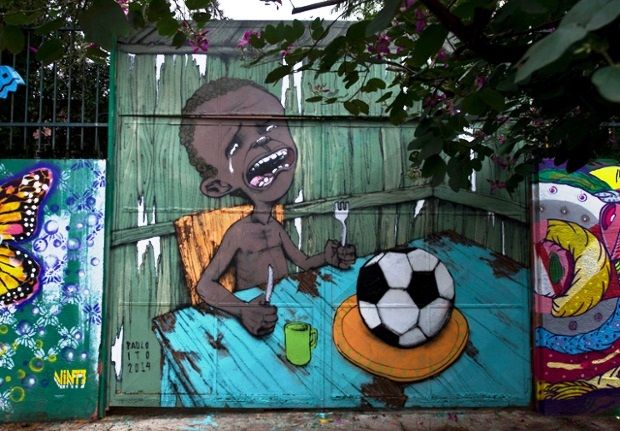 We live in a time when the whole establishment is not only corrupt and rotten to the core but is seen as such by a large section of the working class, both in Britain and throughout the rest of the world. Bankers and financiers are manipulating the markets for short-term gain; politicians are pocketing whatever they can whilst demanding that the poor accept pay cuts and declining services; rich and powerful individuals are exposed as having carried out acts of extreme depravity right under our eyes with nothing being done about it; bosses carry out illegal blacklisting aided by the state...the list goes on. However, if you were to ask the average person in the street to come up with something that defined, above everything else, corruption, bribery and general fiddling, many would answer with one word: FIFA.

FIFA is not a secret governmental organisation or a criminal cartel, but the international governing authority of a sport - in this instance football. For over a decade now, this body has been at the centre of one scandal after another. Books have been written, reporters have dug deep, even official investigations have been started...and then buried. All have pointed to the same conclusion: FIFA is awash with double-dealing, behind-the-scenes dodgy setups, back handers, and much, much more. Yet until now nothing has come of it. The FIFA leaders and its members have been able to carry on with extreme impunity, seemingly safe from any comeback.

The mafia of international sport

As FIFA delegates met this May for their big get together, things took a nasty turn. A joint US FBI and Swiss operation led to files being seized, indictments being handed down and seven FIFA officials being dragged out of their five-star hotel rooms by police at the crack of dawn. As they were being bundled into police cars, they must have wondered allowed: what has changed? Why are they doing this to us now?

These are good questions. After decades of being left alone, they must have assumed that they were impervious to any official action. Now we are seeing talk of further investigations and more indictments being handed down. The US attorney general has appeared on TV in front of a chart of the FIFA organisation that mirrored the Senate-investigation scene in Godfather II. FIFA delegates at their meeting in Switzerland – a country chosen to be the base for FIFA because of their financial secrecy laws – have been forced to hide behind closed doors, avoiding the prying eyes of journalists. The similarities to the mafia are multiple in its number. A rare achievement for a sporting body!

FIFA has changed much in the last fifty years. It has gone from being just an officiating sporting organisation, full of men in blazers waffling on, to becoming a multi-billion dollar operation. Incredible deals have been struck with worldwide conglomerates, business “partners”, TV companies and others which has resulted in FIFA’s income increasing out of all proportion. In theory much of this money should have then been recycled to the various national footballing bodies around the world. To what degree this has actually happened and in what form is an open question. Certainly, football has become very big business indeed.

At the centre of all this has been FIFA president Sepp Blatter. He has maintained his privileged position for decades by exploiting an interesting voting rule in FIFA. Each national body has precisely one vote each. So the Canary Islands has the same voting power as Germany, for example. Now Blatter realised that it would be difficult to financially influence the large national associations and relatively easy to influence the small ones. These small bodies, often with little income to play with, could be easily won over by promises of additional funding without breaking the FIFA bank. It was easy to feed off the suspicions that the big national bodies would, given half the chance, take all the money and leave the smaller associations to rot. In addition many of these bodies, packed as they are with powerful people’s brothers and uncles, would be more than amenable to a situation where they could travel around the world, sleep in flash hotels, be wined and dined and, of course, receive lots of tasty gifts.

This makes a lot of sense when you remember that FIFA delegates are charged with looking at and deciding on bids to stage the World Cup every four years. The temptation to “assist” these men and women in coming to the right decision is all too obvious. So it was that when it came to choosing the host nations for the 2018 and 2022 finals, the delegates chose...Russia!....and Qatar!

As soon as the votes were announced questions were being asked. How could a country like Qatar be chosen to stage a summer competition in temperatures so high that no one could survive a ninety-minute game? It quickly became clear that this was not possible and plans have been hurriedly announced to change the dates of the final from the summer to the winter. This has angered the European and US football authorities, who already have lucrative TV and sponsorship deals in place which are dependent on no such unexpected disruptions taking place. No wonder people were asking: why did the delegates not think of this before voting? Clearly some of them have been paid not to think. In this they have been aided by senior FIFA officials who have colluded in these arrangements. No wonder when the result was announced, the Qatar delegation could barely disguise their lack of surprise at the announcement.

The rotten stench of hypocrisy

Since the arrests FIFA and Blatter have been in denial. Blatter won his re-election vote as FIFA president, a result which he accepted with a speech so bizarre that you wonder what was in the water. They are hoping it will all blow over - but the genie has been let out of the bottle. More charges and investigations will follow. The sponsors, who started the rot in the first place with their money, are unhappy. There is talk of breakaways and boycotts. Even such characters as Platini have broken formation and attacked the status quo.

This will not go away. FIFA is seen as being stocked with people who have no real connection with the actual game – very few of the FIFA cronies have ever played, coached or managed – and are just there for the money. They had no problem taking the money and choosing a country like Qatar to stage the World Cup. The reports of cheap labour being used to build the stadiums would have passed them by. The anger of the masses in Brazil before the last World Cup in 2014 was a non-issue to them. It was always about the money. So it is in FIFA, so it is for all of capitalism.

Let's kick capitalism out of football

The richest irony of all is that the change in fortune for the FIFA cronies has come not because of the blatant abuses over the Qatar vote, but rather over the vote for Russia. Although Russia, just like all the previous countries who have won staging rights, clearly were very generous to the deciding delegates, their vote was seen as the least questionable. Russia is the only major country apart from Australia and China to have not yet staged a World Cup. However, world politics has changed in the last few years. Russia is again seen as the enemy by the US and their lapdogs in Europe. America has been looking for ways to get back at Russia for defying them over issues like the Ukraine. Having seen how Russia rubbed the US’s noses in it over the Olympic Winter Games (where TV reporters were forced to give reports in front of a giant statue of Lenin), the staging of the 2018 World Cup in Russia was too good a target to miss. So the arrests begun and those who thought themselves safe are now realising otherwise.

This ongoing scandal will not just stop with Blatter and FIFA. The rotten setup we see here is mirrored at all levels of football. They have all operated to make money at whatever the cost to the game itself. Rising ticket prices; changed game times to suit TV; boards who treat supporters with contempt. This is how most supporters see the game today. The FIFA scandal is just the most visible and decayed example.

All these cronies should be booted out and replaced by representatives from supporters, coaches and local communities. We need to take the game back from the moneymen and their cronies so that it is run for the benefit of all. The clubs should be nationalised and used for the benefit of local people. Internationally, real democracy should be brought in for bodies like FIFA so that they act as they should do, rather than as money making machines run by racketeers and gangsters. What we need is a revolution from top to bottom.