1917 The February Revolution of 1917 Reading Guides 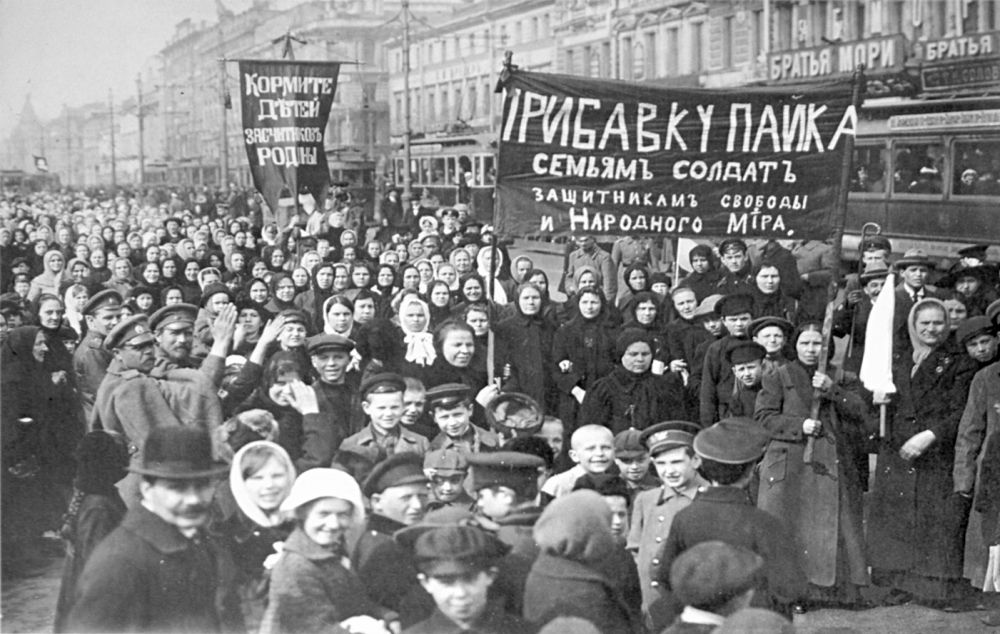 The February Revolution: On February 23rd the revolution begins as strikes and protests in Petrograd erupt into a mass movement involving hundreds of thousands of workers; within 5 days the hated and seemingly omnipotent Tsarist Monarchy is overthrown.

“What it is important to realise is that from the first the revolution was a revolution of the people. From the first moment neither the Duma nor the intelligentsia had any control of the situation.” (Bruce Lockhart, Memoirs of a British Agent)

On 23rd February 1917 (according to the old Julian calendar, new calendar 8th March) the first explosive chapter of the Russian Revolution began. Beyond the expectations of any revolutionary organisation, the spontaneous strike action of women textile workers in Petrograd sparked a wave of revolt which would culminate in the overthrow of Tsar Nicholas II within just five days.

The February Revolution saw a mass strike develop from below at a furious pace which posed the question of state power within a week of its inception. Workers in Petrograd took to the streets against intolerable bread shortages, the slaughter of thousands of Russian workers and peasants in a futile imperialist war, and the brutally oppressive rule of the tsar. They were soon joined by their comrades in the army and workers and soldiers across Russia. As Trotsky put it, “the streets of Petrograd again speak the language of 1905,” the year of the previous revolution in Russia.

The revolutionary masses, leaning on their experience from the 1905 revolution, immediately set up the the Soviets of workers’ and soldiers’ deputies. This led to a situation of Dual power with two organs of power. On the one hand was the Soviet - that is, the organised expression of the revolutionary masses -  and on the other hand the Provisional Government and the Duma composed of the representatives of the landlord and capitalist class. This strugge would define the whole of the course of the revolution from February to October.

News of the Tsar’s overthrow sent shockwaves around the globe. For their part, Russian revolutionaries in exile including Lenin and Trotsky scrambled to return to the scene of these great events. They immediately their role as Marxists with a perspective for the Russian proletariat to take the power that the revolution now offered them.

It is vital that we study the development of the Russian Revolution from these first few days and extrapolate general lessons both from the events themselves and from the tactics of great revolutionaries in response to them. 100 years on from 1917, we are again in an epoch when revolution is the watchword. We must prepare ourselves for coming revolutionary events by examining the treasure trove of historical accounts and Marxist analysis of the greatest revolutionary event in history.

This list of chapters and articles on February is intended to supplement the broader reading guide for the Russian Revolution as a whole that we published earlier this year. It contains both sections from larger texts and stand-alone writings specific to the February Revolution, in order to equip the reader with a thorough understanding of this event in particular. Throughout the year we will be publishing reading guides to coincide with the anniversaries of other important stages of the Russian Revolution, such as the April Days, the July Days, the counter-revolutionary assault of Kornilov, and of course the October insurrection.

Editor of In Defence of Marxism Alan Woods provides an overview of every aspect of the February Revolution, including its causes, a brief summary of its events and the implications it had for the Bolshevik Party and the Russian working class.

The History of the Russian Revolution Volume 1: Chapters 1-5 | Leon Trotsky Available for purchase

The definitive Marxist text on the Russian Revolution beginnings with Trotsky applying a dialectical analysis of its causes, as a well as a profile of the doomed royal couple.

Shliapnikov was a leading Bolshevik in Petrograd prior to and during the Russian Revolution. This chapter of his account deals with the burgeoning crisis in Russia from the second half of 1916, and how the Bolsheviks were preparing themselves for potential revolutionary events.

Before 1917: The Gathering Storm | Hamid Alizadeh

This article gives a background to the events of 1917, analysing how the conditions for revolution and the collapse of the monarchy were being prepared.

Bruce Lockhart was a British spy stationed in Moscow at the time that the Revolution broke out. In this chapter of his memoir he recounts the mood of terror amongst the Russian bourgeoisie at an impending revolution.

On the Eve of the February Revolution | Hamid Alizadeh

This article describes the atmosphere in Russia, among both the workers and the ruling classes, immediately prior to the beginning of the Russian Revolution.

The Events of the Revolution

The History of the Russian Revolution Volume 1: Chapters 6-9 | Leon Trotsky Available for purchase

In these chapters of his History, Trotsky depicts the acts of the revolution itself, first from the Tsar’s camp and then from the streets. He also begins to deal with the questions of revolutionary leadership and state power.

On the Eve of a Revolution | Leon Trotsky

This essay was Trotsky’s first response to receiving news of the Revolution in exile. It captures the mood of exultant expectation about revolutionaries internationally at that time.

The First Stage of the First Revolution | V. I. Lenin

This letter was Lenin’s first examination of the Revolution in full. Although its only sources were the international press cuttings Lenin had access to in Zurich, as Trotsky suggests, the piece “constitutes a finished analysis of the revolutionary situation.”

In these chapters of his memoir, Bruce Lockhart explains his own surprisingly insightful conclusions on the causes and events of the February Revolution from a bourgeois perspective.

Bolshevism is a history of the Bolshevik Party and its origins up to and including 1917. In this section of its final part, Alan Woods describes the events of the February Revolution.

The Provisional Government and the Dual Power

The History of the Russian Revolution Volume 1: Chapters 10-12 | Leon Trotsky Available for purchase

Here Trotsky looks at the formation of the new government, the role of the Soviets at this time and examines the question of dual power.

The New Government and the Proletariat | V. I. Lenin

In his second formal letter about the Revolution, Lenin discusses in detail the provisional government and what attitude the Russian workers should have towards it.

In this section of Bolshevism, Alan Woods discusses the various roles of the Bolsheviks, the Mensheviks and the provisional government during and immediately after the February Revolution.

The History of the Russian Revolution Volume 1: Chapters 13-14 | Leon Trotsky Available for purchase

Chapters 13 and 14 of the first volume of Trotsky’s History concern the army, Russia’s role in World War I and the new government’s approach to the war.

Farewell Letter to the Swiss Workers | V. I. Lenin

In this passionate letter written as he prepared to embark on his return to Russia, Lenin condemns the pro-war bourgeois Russian government, suggests that the Russian Revolution will inspire the international proletariat to follow suit and reiterates his slogan of revolutionary defeatism.

How to Achieve Peace | V. I. Lenin

Here Lenin explains that peace in Russia could only be achieved by a workers’ government.

In these chapters of his History, Trotsky depicts the acts of the revolution itself, first from the Tsar’s camp and then from the streets. He also begins to deal with the questions of revolutionary leadership and state power.