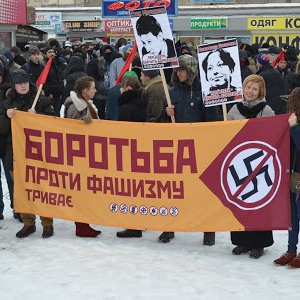 Yesterday, May 20 a paramilitary gang of armed fascists attempted to kidnap a number of Borotba activists in broad day light at the end of a protest against the Kiev authorities in Freedom Square, in the centre of Kharkov. The attack was repelled by the protesters and by passers by who were faced with the passivity or complicity of uniformed police present. (see Borotba statement here)

The attack was carried out by armed men, some wearing balaclavas and military fatigues who hand-cuffed a number of leading activists of Borotba and attempted to bundle them into an unmarked van. One of those hand cuffed was Denis Levin, secretary of the Kiev organisation of Borotba, who was forced to move to Kharkov in February after "Euromaidan" activists destroyed the Kiev offices of the organisation.

VIDEO of the attack here:

VIDEO with more details of the fascist assailants:

Borotba is a Marxist organisation set up in 2011 and has played an important role in the anti-Kiev protests after the removal of Yanukovich, particularly in Odessa and Kharkov. After the Odessa massacre on May 2nd, the organisation has been forced underground. Its offices in Kharkov were raided by armed men from an unidentified police or paramilitary force without a search warrant. Their council candidate and regional council member in Odessa, Alex Albu, has had to flee the country to Crimea for fear of being arrested (see his press statement here)

The attacks against Borotba are part of a more widespread assault on democratic rights by the Kiev "acting government" against all those who oppose its policies. "Acting president" Turchynov has started legal proceeding to ban the Communist Party of Ukraine (which received 2.7 million votes in the last election) and its leader Petr Simonenko was attacked by armed fascists when leaving a TV interview, on Friday, May 16. Fascist thugs, acting with the complicity or passivity of the state apparatus, have ransacked offices of the Communist Party in Kiev and other cities and have forced the party to cease its activities.

The fact that the attack was carried out, in broad daylight, by a paramilitary group should not be a surprise. In the last few months the Kiev authorities have been incorporating neo-nazi paramilitary groups into the state apparatus by recruiting them into the Azov Battalion of the Ministry of the Interior (the "black men") and also a variety of other Battalions of the National Guard (Donbass, Dniepr, etc - See video below). These paramilitary groups, some of them funded directly by oligarchs like Dnepropetrovsk governor Kolomoisky, are the government's answer to the fact that ordinary soldiers are refusing to fight against their own people in the rebellious provinces of the East.

These "Battalions" are composed of "patriotic volunteers", many of whom come from fascist and neo-nazi organisations like the Social-Nationalist Assembly, Patriots of Ukraine, Brotherhood, the 14th Centuria, the Right Sector, Auto-Maidan, the Maidan Self-Defence, as well as retired members of the security forces (See for instance the swearing in of the second group of volunteers of the Azov Battalion where they are carrying Nazi flags)

This is the kind of "democracy" which today exists in Ukraine, with the full backing of Washington, London and Berlin.

The International Marxist Tendency would like to send our revolutionary solidarity to the comrades of Borotba and other anti-fascist organisations. We condemn in the strongest terms the assault on democratic rights in Ukraine, particularly the attempt to ban the Communist Party, and call on the international left wing and labour movement to organise a solidarity campaign with the anti-fascist resistance.

Down with the Kiev government!

Solidarity with the anti-fascist resistance!