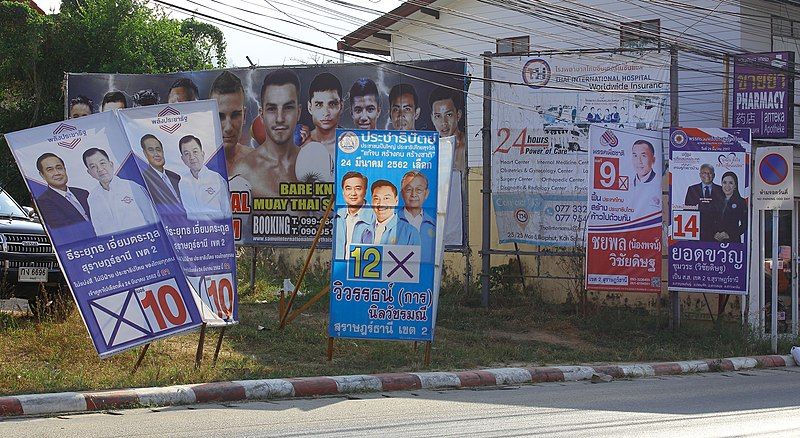 A massive ten-and-a-half weeks after Thailand’s first general election since 2014’s military coup, the leader of said coup, Prayut Chan-o-cha, was voted in as Thailand’s prime minister by the new parliament on 5 June. His victory was about as surprising as discovering that the next pope will be Catholic, since the military junta has spent the last five years engineering the Thai constitution to guarantee they are never out of power. The process has been as bizarre as it was farcical.

The military junta came to power after ousting the freely elected Yingluck Shinawatra from power. She was overthrown in 2014 on trumped-up charges of violating the constitution by general Chan-o-cha, who then immediately scrapped this supposedly sacred constitution in order to write a new one weighted ludicrously in favour of himself.

The 2014 coup is the most recent in a long line of Thai coups. The ‘modern Thai coup’ era began in 2006, when Yingluck’s brother, Thaksin Shinawatra, was himself overthrown in a coup. Ever since he won the 2001 general election, the Thai ruling class has been hopelessly split and unable to govern. The heart of the establishment is centred on the military and the royal family, but they have proven themselves singularly incapable of solving the problems of Thailand’s poor majority, and are deeply corrupt. Parties representing this establishment have been unable to win an election ever since Shinawatra burst onto the scene in 2001.

The Shinawatras, themselves billionaires, have gained mass support from the urban and especially rural poor for carrying out mildly redistributive economic measures. The class differentiation in voter bases is clear – 56 percent of ‘Red Shirts’, as the left-wing supporters of the Shinawatras are known, earned less than $1,000 a month, compared to only 10 percent of the pro-monarchy demonstrators. “Nearly one-third (32%) of PDRC [pro-monarchy] respondents earn monthly incomes exceeding 60,000 baht ($1,900), while just 4% of red shirt respondents have similar earnings.”

According to Credit Suisse, Thailand is the third-most-unequal country in the world, so while it has a relatively developed economy and high GDP-per-capita, the distribution of this wealth is such that most people are poor, and about 10 percent are in chronic poverty. It is this mass of poor people, and in particular the fact that they had begun to organise themselves in the Red Shirt movement, that terrifies the Thai establishment. But this establishment has no interest in solving the problems of the poor majority.

Unable to defeat Red Shirt-supported candidates in elections, the military has resorted to regular coups and violent repression to ensure their power and privileges remain intact. There have been 12 successful coups since 1932, and as a result they have become normalised. The Thai ruling class has not and cannot find a way to build a social base for itself, instead it borrows the royal family’s mass support (which is rapidly dwindling). The more coups it conducts, the less of a social base it is able to build, and hence the more it has to rely upon coups to stay in power. 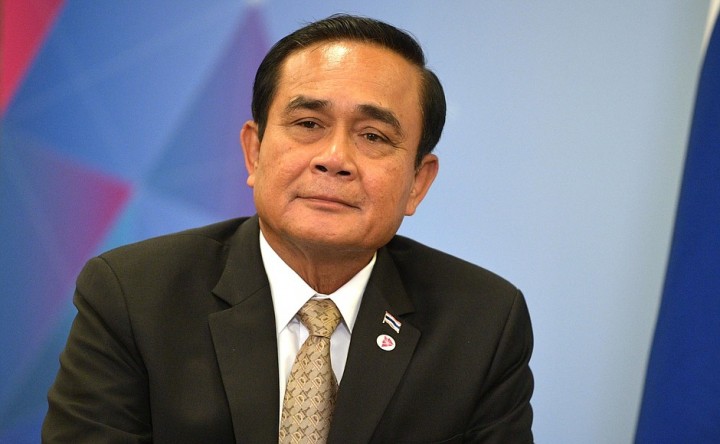 Leader of 2014’s military coup, Prayut Chan-o-cha, was voted in as Thailand’s prime minister on 5 June. This was hardly surprising, as the military junta has spent the last five years engineering the result / Image: PoR

The military caste is particularly bloated, partly due to its role as South-East Asia’s US lapdog during the Vietnam War, in which Thailand hosted seven US air bases. When the war was over, the Thai military got to keep huge amounts of hi-tech US military equipment, inflating its power and self-regard. “Despite having no obvious external enemies, Thailand has over 1,700 generals and admirals-proportionally a vastly higher percentage than in the U.S. military. Most of Thailand's senior officers have no real jobs. Instead, they have come to believe they can gain prestige, work, and money only by intervening in politics.”

Because the military junta that came in in 2014 has a very thin social base, it has had to re-engineer the Thai constitution to guarantee its role, like a spoiled child who insists on having an enormous head start when racing its friends. The junta delayed promised elections five times. Until about three months before the elections took place, all political activity and gatherings of more than five people were banned. This law was used to take action against the Shinawatra-affiliated Pheu Thai party for holding a press conference, and as a result, two of its leading members are being tried for sedition.

Lèse-majesté laws that criminalise any activity deemed to be insulting of the monarchy have been liberally used by the junta, who have also increased sentencing and used secret trials. For example, in 2015, Pongsak Sriboonpeng was sentenced to 60 years in prison for six Facebook posts. “According to Thai Lawyers for Human Rights, 162 individuals were prosecuted for lèse-majesté in the past four years, and another 92 were charged with sedition” (Al Jazzera, 19/08/18). 57 were sentenced to prison terms of up to 35 years. Three other activists were recently arrested on the basis of this reactionary law. The leader of Future Forward, a new, anti-military party, has been disqualified as an MP after posting a Facebook video criticising the regime (the official charge is ‘cyber crime’!), and the party is facing charges under the lèse-majesté laws because it didn’t change its Facebook cover photo to a picture praising the new King upon his recent coronation!

The Thai establishment cannot be accused of over-confidence. Fearing (quite rightly) that even these restrictions and intimidations would not be enough, it re-wrote the constitution to permanently place the military at the centre of power. Of particular note is that the prime minister is elected by a combination of the lower and upper parliamentary chambers (unlike before), and the upper chamber, or senate, is exclusively appointed by the military. Given that the senate is exactly ⅓ of the overall size of both chambers combined, and is totally loyal to the military, the military’s preferred candidate need only secure a quarter of the votes of the lower chamber in order to become prime minister. Unsurprisingly, Prayut Chan-o-cha easily managed this.

During the five-times delayed election, “there were multiple reports of army resources being utilised to pressure voters into voting for Phalang Pracharat, with soldiers mobilised, particularly in remote rural areas away from the watchful eyes of the international community. Rohana Hettiarachchi said the Asian Network for Free Elections’ interim findings had indeed highlighted a ‘misuse of government power and resources used to the advantage of one party. It was significant across the country, especially in rural areas. This is partly vote buying.’ He added: ‘We also know that direct vote buying was reported across the country but no one is coming forward with evidence.’” (Guardian, 26/03/19)

But there is even more. The military-appointed Election Commission took 45 days to announce the official election results. Although they offered no explanation, it is not hard to imagine why the delay happened, especially given that the same Election Commission, after the voting took place, changed the seat distribution formula which just happened to benefit the military’s Phalang Pracharat party, and to be detrimental to the anti-military Future Forward Party.

Further still, there are numerous reports from various parties of bribes being offered to their newly elected MPs to switch to supporting the military leaders. And still, after all this, Phalang Pracharat failed to win the most seats in parliament! Once again, that honour went to Pheu Thai.

But the military junta’s democratic credentials fool no one. The shenanigans it has had to resort to over the past five years to prevent the Red Shirts from gaining power are a testament to its own weakness. Future Forward is a new party with a popular young leader, Thanathorn Juangroongruangkit. Much like Thaksin Shinawatra, he is from a bourgeois family and has no intention of challenging capitalism. But he appears to represent a big break with the past, and, also like Shinawatra, offers some moderately progressive policies, such as universal, free childcare, cutting university fees, free healthcare, universal pensions, a more progressive income tax, an increase to the minimum wage, and a maximum 40-hour working week. His persecution at the hands of the generals will only serve to raise his profile and turn him into a hero for the Thai working class, peasants and youth.

Crisis on the horizon 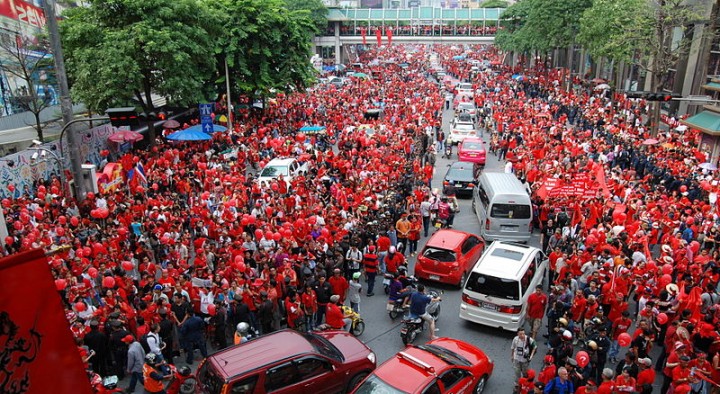 Chan-o-cha’s reign will be one of crisis. The Red Shirts last organised massive, militant demonstrations only six years ago. There is a burning indignation at the rule of the corrupt generals / Image: Takeaway

Chan-o-cha’s reign will be one of crisis. Thai workers know how to organise militant mass protests; the Red Shirts last organised massive demonstrations only six years ago. There is a burning indignation at how these corrupt generals have stolen from them their leaders and elected governments. Furthermore, the Thai economy is showing signs of stagnation as it suffers from the so-called ‘middle-income trap’. No longer is it able to compete on low wage terms, but it is still not productive enough to compete with the likes of China or South Korea. It will not be long before the regime is shaken by new scandals and mass protests, more militant than ever before.

In these conditions, illusions in the persecuted Juangroongruangkit will become widespread. It is possible that a mass movement will spread around his party. However, he has not shown any ability to mobilise his base to oppose the junta. Rather than calling mass protests and strikes against the junta and their persecution of himself and his party, he appealed to the military-controlled courts. In his attempt to be elected prime minister by parliament, he formed an alliance with the Democrat Party, who in the 2000s participated in the coup against Shinawatra and whose ministers presided over the killing of Red Shirts.

There can be no way forward against this rotten military dictatorship on the basis of deals at the top and constitutional appeals. The regime must be overthrown. Over the past 10 years, the Red Shirts have shown the militancy that is needed. Only mass, working-class methods – demonstrations, strikes, and a socialist programme – can break Thailand out of the military-monarchist stranglehold.