Here we provide a brief eyewitness account of the November 4 demonstrations in Tehran sent by activists involved in the the events.

On November 4 2009 (13 Aban 1388) the Iranian regime held demonstrations commemorating the thirtieth anniversary of the US embassy seizure. In spite of mobilising even more security forces than before, tens of thousands turned out to demonstrate against the fundamentalist faction - and in some cases, the whole Islamic regime - in Tehran. 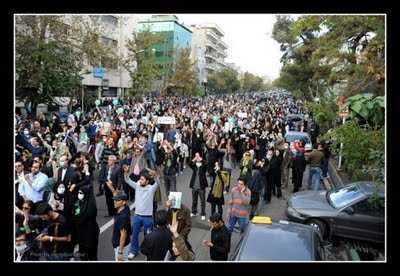 We started from Vali-e Asr Square at 10am, and headed towards the Haft-e Tir, but before reaching Haft-e Tir, the police attacked us. We were forced to jump over fences, … [a number of us were beaten].

Then we changed direction and headed north, in the streets north of Haft-e Tir, we were attacked by the police several times. When some people were chanting “Independence, freedom, an Iranian republic” we tried to change the slogan to “Free all political prisoners”. After that some basijis suddenly attacked us with knifes and sticks, so we had to escape again.

People started fires in the streets; the police used tear gas a lot. The police were really crazy; they were just attacking people, with no mercy or let up. At one point, when we were north of Haft-e Tir, people started attacking the police! That was great, for one minute the atmosphere changed, they started running towards the police. But after a very short time the police attacked them, and they had to flee.

Then we decided to go north, towards Taleghani Street and Beheshti Street (formerly Takht-e Tavoos and Abbas Abad). There we saw another group of demonstrators inviting people to join them. When we were there, we heard the sound of an explosion. It seemed as if something had exploded. Then we continued on our way and reached Vanak Square. 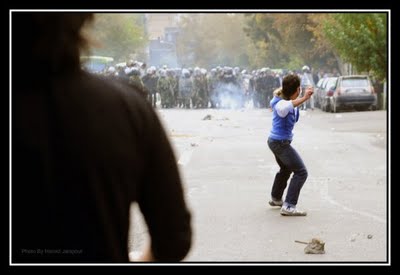 The demonstrations and people were not concentrated in one street; we even saw demonstrations in the alleyways. All the plain-clothes agents were tying to hide their faces with masks. Some of the riot police acted like they were drunk! They would suddenly attack people who were just walking. Old people were encouraging the youth [to resist]. They asked us not to run away.

The scattered nature of the demonstrations caused problems for the police. When they broke up the people gathering in one street, after some minutes, they would gather in another street. The police were moving from one street to another on motorcycles.