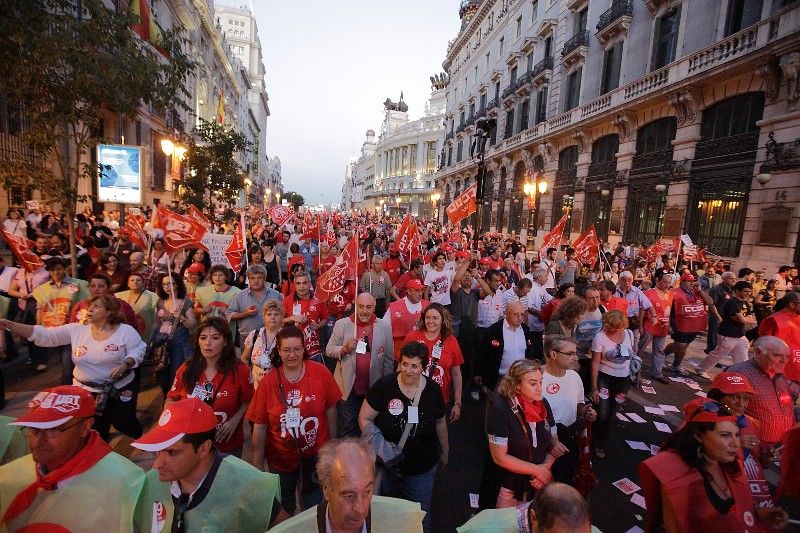 Tens of thousands of protesters took to the streets across Europe as strikes and demonstrations caused widespread disruption. The main action came in Belgium, Greece, and Spain with trade unions fighting against austerity measures that will have devastating consequences for the jobs and lives of working people. Strikes or protests took place in 37 countries, including Portugal, Ireland, Slovenia and Lithuania.

Around 100,000 people from 27 different countries took part in a demonstration in Brussels. Demonstrators marched through the streets toward European Union buildings in bright red, green and blue labour union jackets, aiming to reinforce the impact of Spain's first general strike in eight years.

The unions said 10 million people answered the call for a general strike in Spain. The two main unions said the strike was being heeded by 70 percent of employees and was a clear signal to the government to retract the reforms. Although the government sought to play down the numbers, flights in and out of the country were severely disrupted, while trains and buses were also badly affected. There was an angry mood on the picket lines which erupted into violence in places like Getafe and Barcelona where a police car was set on fire.

Labour Minister Celestino Corbacho declined to give an overall figure for strike participation, but said “only 7 percent of civil servants” had taken part and “20 percent of transport workers”. But he acknowledged that energy consumption was down by 16 percent. Since this represents a level of activity typical of a Saturday, his attempt to play down the participation was immediately exposed as false. 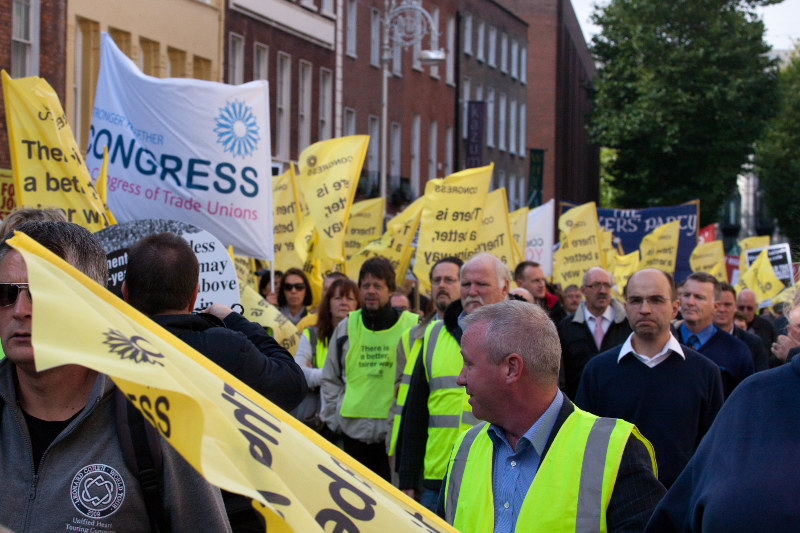 Dublin. Photo: William Murphy. In Ireland protestors gathered outside Leinster House in Dublin to mark the first day of the new Dáil term. According to local media reports there were up to 20 individual groups or causes protesting against government cuts and the lavish handouts being offered to the banks. Among the groups gathered in Dublin were the Irish Congress of Trade Unions, the Children's Mental Health Coalition, the Irish National Organisation for the Unemployed, People Before Profit, Patients Together, SIPTU and the Aerial Spraying Protest Group. There was also a demonstration outside Anglo Irish Bank headquarters on nearby St Stephen's Green.

In the early hours of the morning, a man rammed a cement mixer into the gates of the Irish parliament, in an apparent protest at the country's expensive bank bailout. Written across the truck's barrel in red letters were the words: "Toxic Bank Anglo." The truck could not be moved as the brakes had been disabled so the entrance was blocked for an extended period of time. One man remains in police custody.

Brussels. Photo: Surat Lozowick. In Greece the unions of civil servants and private sector employees marked the European Day of Action by stepping up protests over the harsh austerity measures implemented by the Pasok government. A large part of the public sector was paralysed for hours, as employees at public transportation, hospitals and utility companies responded to the call to walk out of work and join massive demonstrations organized by General Confederation of Greek Workers (GSEE) and the Civil Servants' Confederation (ADEDY) in front of the European Union Offices in Athens and the Greek parliament.

Thousands of commuters nationwide were hit by a strike that halted subway, trains and buses for four hours and dockworkers joined the protest with work stoppages at the ports earlier in the morning. Public hospitals across the country ran on limited personnel all day due to a 24-hour strike organised by the doctors' and nurses' unions. 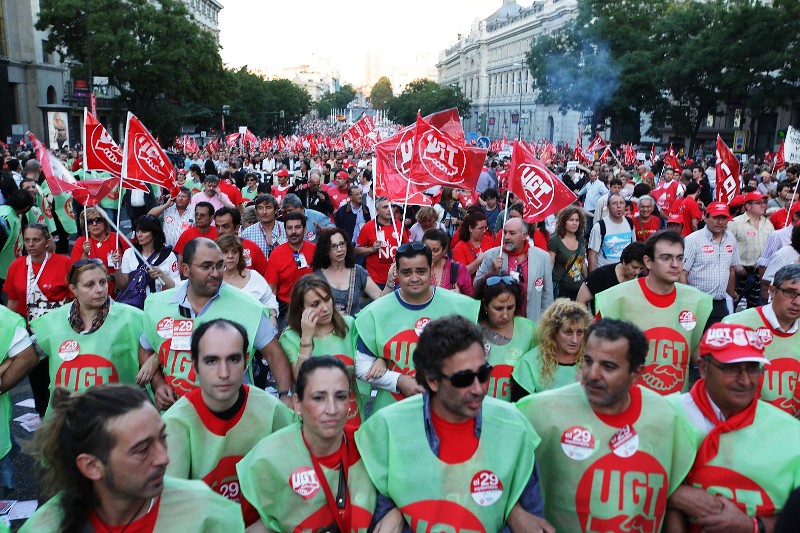 Madrid. Photo: UGT Madrid There is a burning sense of anger at the cutbacks on salaries, tax hikes and unpopular structural reforms that have been inflicted on the workers at the instigation of the European Union and International Monetary Fund (IMF).

In May Greece secured a 110 billion euro (149.43 billion U.S. dollars) financial aid package over a three-year period in exchange of the full implementation of a Stability and Growth Programme to slash a budget deficit that in late 2009 stood at 13 percent of GDP. But this act of “generosity” was made conditional on a programme of vicious cuts.

The country has been hit with a wave of strikes and protests over the past few months, as the unions oppose the government policies. "Employees, unemployed and pensioners who suffer from the unfair policies of the memorandum signed by the government and lenders will get out on the streets," said a statement released by GSEE.

"This year Greek citizens witness the most barbaric attack on their wages, working status and pension rights. Social imbalances increase, as well as unemployment, incomes decrease and with more tax hikes economy declines to recession and more and more people suffer from poverty," ADEDY added. 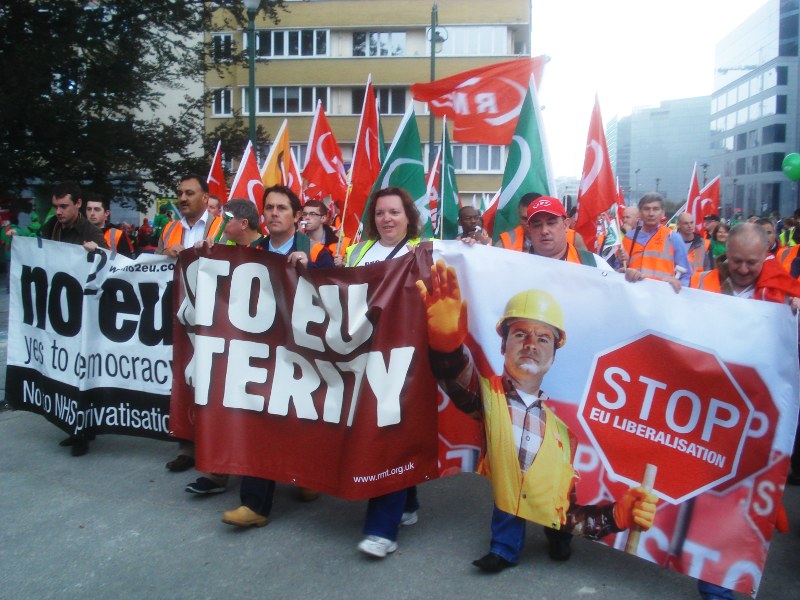 Brussels. Photo: Surat Lozowick. This successful day of action was only the first shot in a bitter battle to defend living standards and jobs against the attacks of a moribund system that puts the profits of the super-rich bankers before the welfare of the people. The capitalists have declared war on the working class everywhere. It is up to the organised working class to pick up the gauntlet and fight back.

The message of 29th September is very clear: “We are many; you are few”. Once the working class is united, organized and mobilized for struggle, no power on earth can stop it.

[We will be publishing reports and photographs tomorrow.]

Photo gallery from the general strike in Madrid