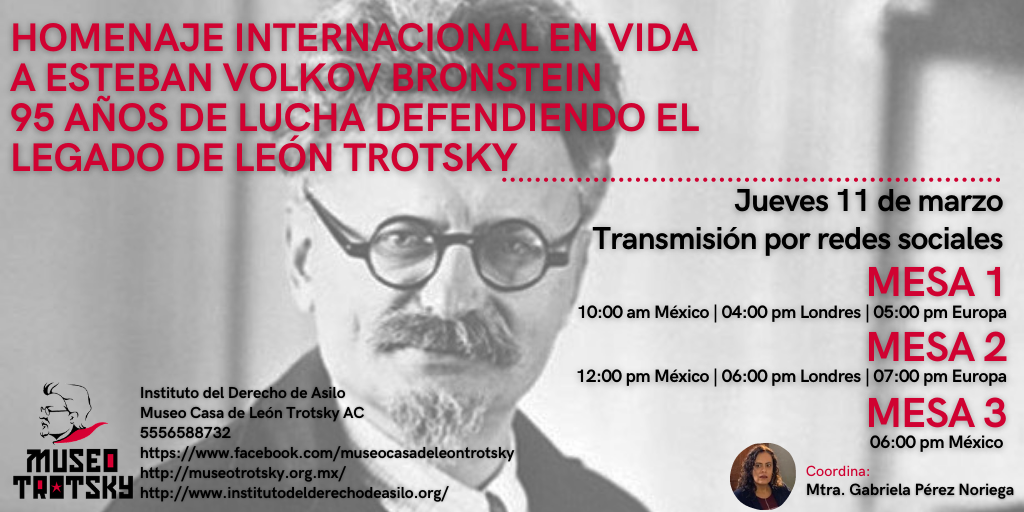 On 11 March 2021, the Leon Trotsky House Museum held an online event to celebrate the 95th birthday of Esteban Volkov, Leon Trotsky’s grandson and lifelong defender of the historical truth of the life and work of the great revolutionary. Hundreds of people from around the world followed the event, which consisted of three separate panels of individuals associated with Esteban Volkov and the Trotsky museum.

Comrades from the International Marxist Tendency were prominently involved with the event. Alan Woods (editor of marxist.com) and Serge Goulart (leading activist of Esquerda Marxista, our Brazilian section) spoke on the first of three panels of speakers, while Jorge Martin (editor of America Socialista) and Ubaldo Oropeza (leading activist in our Mexican organisation La Izquierda Socialista) acted as moderators for the second and third panels, respectively.

The event opened with a short video about the life of Esteban Volkov, including pictures from his childhood and youth, as well as his activities later on.

The touching homage to Esteban Volkov highlighted his remarkable human qualities; the importance of Trotsky’s legacy and of Volkov’s efforts in preserving it; as well as the need to support the museum as an enduring symbol of this legacy.

Celebrating a life of struggle

The speakers alluded to the numerous tragedies that marked the early life of Esteban Volkov, who was born in Yalta, on the Crimean Peninsula, and who lived briefly in exile in Austria and Paris before his grandparents were able to secure his arrival to Coyoacán, Mexico. The house in which he and his grandparents lived has, since 1990, operated uninterruptedly as the Trotsky museum.

Volkov lost his mother, grandmother, sister, and uncle to the brutal persecution of the true defenders of the October Revolution by the Stalinist bureaucracy. Stalin’s persecution extended to the entire families of his enemies. Finally, it reached Trotsky himself, after two assassination attempts, through which Volkov personally lived.

And yet, as Woods pointed out:

“[Volkov] has managed to maintain an optimistic sense of life, a tremendous sense of humour – that is something really admirable I would say in any human being – and that perhaps has its explanation. … His whole life has been devoted to a cause, and that is what keeps a person healthy, what maintains morale, the conviction that there is something greater than ourselves and greater than our personal concerns and tragedies.” 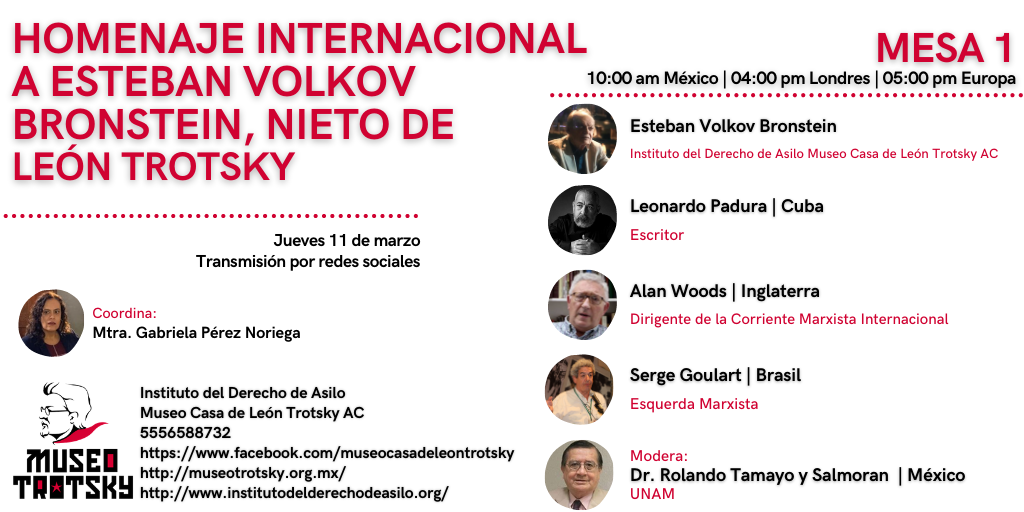 As Woods remarked, Stalin believed that, by burying Trotsky, he would bury the biggest threat to himself and the bureaucratic caste he represented. In the person of Trotsky were embodied the genuine ideas, method, and traditions of the Russian revolution, which the self-interested bureaucracy had proceeded to distort beyond recognition. But what the Stalinist bureaucracy did not understand is the power of these ideas, which live on in the indestructible legacy of Trotsky’s work.

Trotsky’s last 10 years, in particular, were critical. Here was “one man facing the most fearsome, most powerful assassination apparatus in history, Stalin's GPU. And yet this man alone was able to do something that no one else could have done, and that is the great task of defending the authentic image and the authentic ideas of the October Revolution and Bolshevism.”

It is in this great cause, of preserving the thread of historical continuity, of the truth, from Marx, Engels, Lenin, and Trotsky, down to the class struggle today – despite a thick atmosphere of lies – that has allowed Esteban Volkov to rise above his crushing personal tragedies.

The picture painted of Volkov by the various speakers revealed a joyful human being of unshakeable humility, sincerity, and devotion to the defence of historical truth in service of the cause of international socialist revolution. And, as Volkov himself pointed out, it is this alone that can free humanity from the endless horrors of capitalism.

The speakers related memorable anecdotes of their encounters and friendship with Volkov over the years. Most were in connection with his work of preserving the historical memory of his grandfather; but others also spoke of Volkov’s distinguished career as a chemical engineer, working at the forefront of the development of birth control pills, and of his great talent as a photographer. In fact, it was announced during the event that the lab in which he worked would be recreated as an exhibit at the museum itself, and that his photography collection would soon be placed on display as well.

Volkov spoke multiple times to express his delight and gratitude toward all the messages being shared in his honour. At 95 years old, he displayed remarkable lucidity and high spirits.

Throughout the event, the moderators and participants made a point to recognise the role of Gabriela Perez Noriega, organiser of the event and museum director, who Alan Woods credited with saving the museum through sheer hard work. It was also emphasized how pressing are the challenges currently faced by the museum. Since the pandemic began its doors have remained closed, cutting off its main sources of revenue.

The museum depends on significant financial support for its continued existence. As Alan reminded us:

“Today's youth do not have many monuments. Here is a monument of the first order of importance; more than a monument, it is a symbol, and symbols, dear friends, are important. Symbols are important for the socialist revolution, and this museum is a living, not dead, reminder of who Leon Trotsky was, and what the October Revolution was.”

To preserve this important historical monument and symbol for the socialist revolution, supporters are encouraged to contribute, and to visit the museum’s website, as well as its Facebook page. 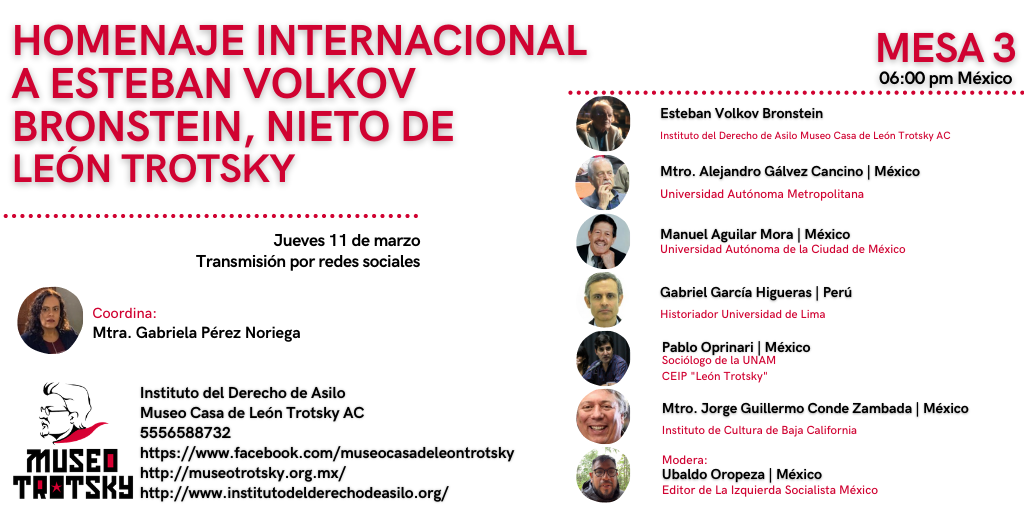 The ideas defended by Leon Trotsky are of crucial importance to the new generations in this new period of class struggle. The period we have entered has been heralded by inspiring insurrectionary mass movements that have broken out in every part of the world in the last couple of years. Herein lies the motivation behind Esteban Volkov’s lifelong struggle to preserve these ideas.

To make the legacy of Bolshevism ever more accessible, it was announced that the Trotsky Museum has joined forces with the Centro de Estudios Socialistas Carlos Marx, the Spanish language publisher of the IMT, to make freely available all of the main works by Leon Trotsky.

“In these books you will find the only explanation of why the USSR fell. What really failed in the USSR was not socialism in any sense that Marx, Engels, Lenin, or Trotsky understood it. What failed was a bureaucratic and authoritarian caricature.”

As Alan concluded: “The real monument to Trotsky is not something made of brass or gold or concrete or marble. It is the indestructible monument of his books,” which contain something that can never be killed, “an idea whose time has come, and these ideas, dear friends, are the brilliant ideas of Marxism. Esteban's work has been fundamental in this regard.”