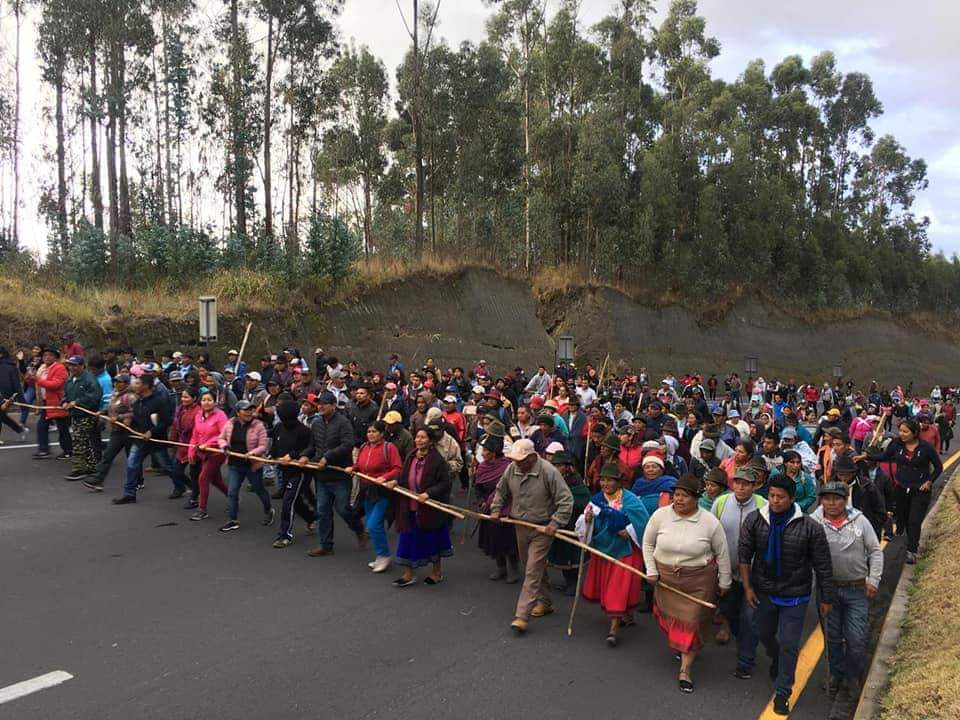 The movement in Ecuador against Lenín Moreno's IMF-inspired austerity package, which began on 2 October, has reached insurrectionary proportions. The state of emergency declared last Thursday and the use of the police and the army (leaving one dead, dozens injured, and resulting in hundreds of detainees) have not stopped the movement of the workers, youth and peasants.

In some provinces, government buildings have been assaulted and the powerful indigenous organisation CONAIE has declared its own "state of emergency". Yesterday, on 7 October, faced with the arrival of the indigenous columns in the capital Quito, Lenín Moreno was forced to evacuate the presidential palace and move the site of government to Guayaquil. Workers and peasants are preparing for a general strike tomorrow, 9 October. The government is hanging by a thread.

What began as a protest against the government's IMF package has developed into a national insurrection. The government's announcement of an agreement with the transport operators was an empty statement. In recent days, we have seen the state partially lose control of the situation. The brutal repression by the police and, since the declaration of the state of emergency, also of the army, far from stopping the protests, has served to pour petrol on the flames of the rebellion.

Every genuinely revolutionary movement tends to split the state apparatus along class lines, and in Ecuador we are beginning to see examples of this in recent days. First, the declaration of the "state of emergency" by CONAIE is a direct challenge to the power of the state and its monopoly on violence. CONAIE announced that neither the police nor the army were welcome in their communities and that if they entered they would be arrested. And so it happened in at least three cases.

In Otavalo, Imababura province, north of Quito, the community arrested 10 policemen from the Intervention and Rescue Group on Friday, who were not released until the next day, after negotiations. In the canton of Nizag, Alausí, Chimborazo province, east of Guayaquil, the community captured 47 soldiers from the Galapagos Armored Cavalry Brigade and 10 police officers, for having launched tear gas canisters against the population. They were finally released and rescued by helicopter on Monday. In Latacunga, Cotopaxi Province, south of Quito, the Union of Indigenous and Peasant Communities of Cotopaxi also held a group of police and military officers on Sunday, as they were trying to arrest young protesters.

In other towns, the police and the army have withdrawn, unable to lift the roadblocks. There are images of police sent to repress the movement that have ended up escorting the indigenous-peasant columns that are advancing to converge in the capital Quito. Some rank-and-file soldiers must sympathise with the protests of their brothers, wives and mothers. Others will have decided that there was no point in being attacked to defend this government. These are still isolated cases, but they are nevertheless very significant.

On Sunday night, Lenín Moreno called for dialogue with "our indigenous brothers", using a very different tone from the one he used when declaring the state of emergency on Thursday night. Then, he talked about the fact that the measures were not negotiable and threatened the protesters that "there would be consequences" for their actions. “Violence and chaos will not win. I will not back down because the right thing has no nuances,” he said. Now, overwhelmed by events, he was forced to offer a "sincere dialogue." Too late. The slogan of the movement at the beginning was "either the package falls, or the government falls", now it is a matter of bringing down the government in order to bring down the package.

Monday started with the government paralysed and losing control of the situation. At dawn, armoured vehicles transported troops with red berets to protect the presidential palace. CONAIE leader Jaime Vargas responded to the offer of negotiations, saying that they had cut off the dialogue with the repressive government, and that they were heading to the capital. Indigenous columns across the country were already marching to Quito and nothing could stop them. In all the access roads to Quito, there were battles and clashes between protesters on one side and the police and army on the other. They could not stop the people on the move:

At one of the entrances to the city, protesters set fire to one of the armoured vehicles:

In recent days, there was looting in several cities, and during Monday's demonstrations in the capital there were acts of vandalism. CONAIE responded that these were the work of infiltrating provocateurs, and that they were going to use the indigenous guard to protect the demonstrations.

The worker-peasant columns in the capital were breaking all the barriers in their path and advancing towards Carondelet palace, which was militarised. A group of protesters tried to take over the National Assembly building. Finally, the government had to suspend the announced press conference and evacuate journalists from the presidential palace. In a televised address, flanked by the vice-president, defence minister and army generals, Lenín Moreno announced that he was moving the government headquarters to Guayaquil. The executive power fled in terror at the offensive of workers, peasants and students, and was forced to leave the capital of the country!

In his speech, Lenín Moreno used the old trick of trying to discredit the protest by saying that it was a plot by Venezuelan president Maduro and former Ecuadorean president Correa. A doubly ridiculous statement, because obviously it was the IMF and Moreno himself who designed the anti-popular adjustment package, and on the other hand the main organisations involved in the mobilisation have long been opposed to Correa. Moreno's accusations are a last, desperate attempt to take away legitimacy from the protest. In fact, the October package has only been the spark that has ignited a national uprising, the fuel for which had been accumulating during two years of attacks and anti-worker measures by the Moreno government.

Build the movement! Bring down the government!

The movement has taken important steps forward. Much of the country is paralysed by roadblocks. The indigenous people have gone from blocking routes to marching to Quito. The power of the state has been partially challenged. The uprising has forced the government to flee the capital. The National Assembly has suspended its sessions. However, victory has not been achieved yet. The government is still in power, the package has not been withdrawn.

CONAIE has declared a Peoples' Assembly in Quito; and for tomorrow, a coalition of workers', peasants' and students' organisations has called a general strike throughout the country. 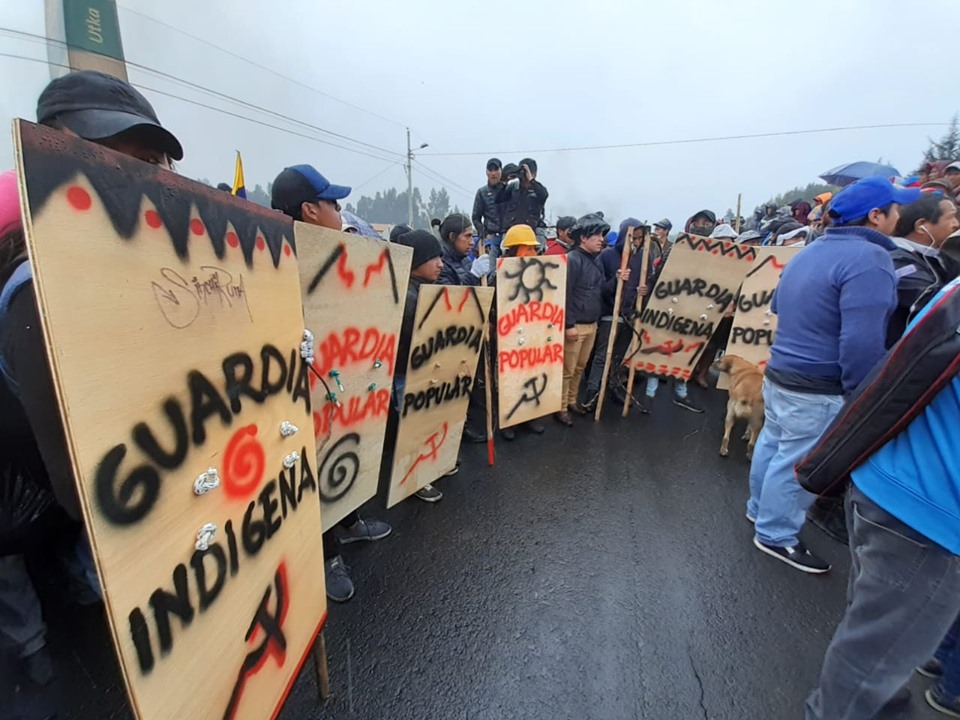 On the other side, the oligarchy and imperialism are regrouping their forces. Guayaquil Mayor Nebot, who at first hypocritically criticised Moreno's measures, has today called “for unity to defend democracy, peace, freedom, cities, families and property." What Nebot, a representative of the rancid Ecuadorian oligarchy and leader of the bourgeois Christian Social Party, is interested in defending - under the mantle of "democracy" and "peace" - is above all "property", that is, bourgeois property. The US has also run to support its Ecuadorian puppet with a statement denouncing "violence as a form of protest." The press of the oligarchy lies and manipulates about the character of the movement.

The movement advances and acquires strength. There are already insurrectional elements in the situation: detention of police and military personnel by the protesters, breaking the blockades of the army and the police, the setting up of a peasant guard, the flight of the government of the capital, the formation of the Peoples' Assembly and so on. It is necessary to strengthen and spread these elements. Workers' organisations, peasants and students must form a united leadership for the struggle. The People's Assembly must be expanded, with elected and recallable delegates from factories, communities, universities and secondary schools, so that it becomes an organ of struggle and power. The indigenous guard must be extended, with the setting up of worker and peasant self-defence organisations to defend the mobilisations.

The peasant-worker alliance in Ecuador in the past has brought down at least two governments that applied austerity packages: that of Bucarám in 1997 and of Mahuad in 2000. The potential to repeat that outcome is implicit in the situation. However, it is also important to learn from the lessons of those events. In both cases the revolutionary movement of the masses overthrew the bourgeois government, but failed to take power in their own hands. As a result, another bourgeois government took power, and when the mass movement had receded, it applied the same policies against working people.

The conclusion to be drawn is as follows: it is necessary to bring down the government of Lenín Moreno in order to overthrow his package. But that’s not enough. The package is not the result of "pure corruption and ineptitude" as Correa says. It is the result of the impact of the crisis of capitalism in Ecuador: whose economy is subjugated to imperialism and export-based. Workers and peasants must take power in their own hands, so that the country's resources are used for the benefit of the majority. It is not enough to bring down the government, it is necessary to wrest political power from the pro-imperialist oligarchy and expropriate its economic power.