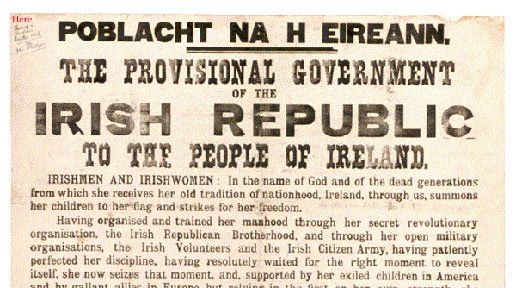 After the Easter 1916 uprising the actual class conditions that motivated the likes of James Connolly and the trade unionists who set up the Irish Citizen's Army to battle capitalism were written out of history. Radical ideas were demonised and Connolly's Marxism was airbrushed from history.

Every Easter since 1916 all over Ireland and in some other parts of the world homage is paid to the men and women of 1916 who on Easter Monday went out to do battle with the then greatest imperialist power in the world. The Easter Rebellion was crushed, the leaders executed, but a spark had been lit that inspired oppressed peoples throughout the world to believe that freedom and independence from Colonialism and imperialism was possible.

Easter 1916 has international significance but unfortunately many of the republicans who gather all over Ireland will not see the international dimension of the 1916 [uprising]. Irish bourgeois nationalists began soon after 1916 to revise the history of 1916.

It became a glorious sacrifice by pure minded Irish nationalists like Padraigh Pearse to redeem the soul of Ireland who by shedding their blood just like Jesus Christ at Calvary reasserted Ireland's manhood and justified the creation of a bourgeois state.

The actual class conditions that motivated the likes of James Connolly and the trade unionists who set up the Irish Citizen's Army to battle capitalism were written out of history. Radical ideas were demonised and the heroes of 1916 elevated into almost saint like status with no politics but a pure love for Ireland and of course totally identified with the Roman Catholic Church. Connolly's Marxism was airbrushed from history. Liam Mellow's call for republicans to appeal to the men and women of no property was demonised as anti-Catholic and communistic. Rome spoke and the people listened! Censorship, piety, poverty, emigration and intellectually sterility became the order of the day from the twenties to the fifties.

During that period those few active republicans in Ireland were generally speaking non-drinking, non-cursing and upholders of Catholic morality. They survived in a stifling environment channelling all their revolutionary energies towards yet another armed uprising or establishing a guerrilla campaign against British interests in Ireland. They had no time for social protest, saw class struggle as alien, and had no understanding of the position of the majority of the Protestant working class. This is not to condemn them for they were in a sense prisoners of history caught in a time warp where intellectual freedom was frowned on, censorship all-controlling and clergy particularly in the partitioned 26 counties almost looked up to as next to God!

But not all conformed. There has always been class-consciousness within republicanism and the story of the role of the left within that fine revolutionary tradition has not yet reached wider layers of the working class.

Only in the late fifties and early sixties did the radical ideas of Connolly and Mellows and the class nature of the struggle for liberation begin to re-surface within Irish Republicanism. That republicanism had gone through many stages since 1916.

It had fought a sustained war of national liberation that ended in partition and the splintering of the Republican forces. It had embraced physical force and the exclusion of any political activity. It had swung to the far left in the thirties and then at the bidding of the bishops rapidly abandoned that left radicalism. It flirted with fascism and Nazism in the late thirties and early 1940's. It began to look to the left when yet another armed campaign, Operation Harvest 56-61, ended in dismal failure with many ex-prisoners demonised, ignored and neglected within areas of Belfast that later became known after 1969 as "republican areas". Older republicans referred to the newcomers as 69'ers.

That swing to the left of course raised issues of policy. The divide between those who argued for a step-by-step approach, first democracy, then national independence and then finally a struggle for socialism, and those who argued for both socialism and independence began. But while that debate was simmering there was also the international explosion of 1968 worldwide when revolution looked to be possible.

Those heady days convinced many that success was just around the corner. Ireland would be united, socialism would reign supreme and the world would be a better place. Yes indeed! The Provos emerged believing that all this talk of socialism was nonsense and was indeed an alien ideology and only direct military action such as bombing the shit out of the 6-counites would yield success. They got it wrong and ended up re-establishing British rule in the north on a firmer basis and without any of that nasty socialism they had so despised in 69/70.

And the left including all the different sections of the republican left? Sadly yet another failure-too introspective, politically sectarian and some were seduced into believing that the rattle of rifles was the sound of revolution. Others believed that they had the way, the truth and the light and so looked down with contempt on others of the left or else launched either verbal or physical murderous assaults on those who failed to share their world-view.

Hopefully all those of a left orientation within the broad family of republicanism will study the barren years from 1916 until 2008 and learn the simple basic lesson that republicanism without socialism is a dead end and that unless and until Left republicans embrace the totality of the international class struggle the prospects of success are nil. Back to Connolly, back to Marx and forward to the liberation of the Irish working class as part of an international victory of the world proletariat.

Source: Editorial Statement in the E-mail newsletter of the Irish Republican Socialist Party, The Plough, Vol. 5, No. 4, Saturday 22nd March 2008