The episode of the signing of the instrument of surrender on 16 December 1971, at Paltan Maidan, Dacca and the subsequent breakup of Pakistan has been the subjection of controversial historical interpretations for the last thirty-nine years. A vast majority of this analysis reflects the interests of the different wings of the ruling classes of the south Asian subcontinent. Hence the official historians have grossly distorted the events and the real aspirations of the oppressed masses during the social blizzard that swept across the region between 1968 and 1972.

Yet one reality that none can deny is the historical failure of the two-nation theory that had lead to the bloody partition of 1947. The fragile and artificial nature of this ideology had already been exposed when already in March1946 Jinnah had accepted the cabinet mission plan of retaining a united India, albeit in the form of a confederation with extended autonomy for the confederating units.

It was the provocation of Nehru at the press conference in Bombay that had forced Jinnah and the Muslim League to back out of the plan. Nehru was lured into this act by the charming influence of Edwina Mountbatten at the behest of Winston Churchill who, along with the serious strategists of British imperialism, wanted partition at any cost to ensure the continuation of their policy of divide and rule, preserve capitalism and sustain imperialist plunder of the subcontinent.

In the twenty seven years after the creation of this hybrid state social and economic development under the nascent ruling classes was of an extremely uneven and combined nature. Although growth rates had soared in the sixties, their impact on society was contradictory. Instead of creating national unity and developing society it resulted in the aggravation of class disparities and national deprivation. After all, Pakistan was not born as a nation state but it comprised of different nationalities. Pakistani capitalism had failed to create the integration of a modern nation state.

However, the first mass revolt in Pakistan came not on a national but on a class basis. In 1968 there was a scintillating mass upheaval that created a revolutionary situation. For 139 days the working class, the peasantry and the youth were in control. It was also the only time that there was a genuine unity of the people on a class basis that had cut across the prejudices of ethnicity, religion, nationality and sectarianism.

In East Pakistan the main leadership was in the hands of Abdul Hameed Khan Bashani and the National Awami party. While the Pakistan People’s Party, under the leadership of Zulfiqar Ali Bhutt ruled the roost. The state was hung in mid-air and the mighty Ayub Khan had to confess in his parting speech, “Every problem of the country is being decided in the streets”.

Unfortunately at the peak of the movement in 1969 when the Maoist Bashani was on a visit to China, Mao Tse Tung had bluntly told him that the Chinese would welcome NAP support for Ayub Khan. Bashani later confirmed this in an interview. But the masses in Pakistan hated and despised the brutal dictatorship of Ayub. He was the central figure of the system against which the movement had erupted. 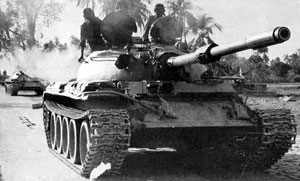 Indian Army's T-55 tanks on their way to Dhaka This caused disgruntlement and a severe setback to the class struggle, especially in the East. Hence, the movement that had erupted on class lines started to divert onto a nationalist discourse. This brought Mujib’s Awami League into the arena.

The working classes who had embarked upon the audacious path to overthrow capitalism were severely hampered by the lack of the necessary instrument (a revolutionary party) to carry out the socialist insurrection. They were forced to turn their attention to the electoral plane to achieve what they had first sought to accomplish on the streets.

The Awami League’s land slide in East Pakistan was mainly due to the desertion of the movement by the traditional ‘left’ leadership. But the A.L. was a bourgeoisie reformist party and had no intention of taking on the establishment. It believed in negotiations and compromise.

In a revealing interview with AFP, Sheikh Mujib had confessed:

“Is the West Pakistan government not aware that I am the only one able to save East Pakistan from communism? If they take the decision to fight I shall be pushed out of power and the Naxalites will intervene in my name. If I make too many concessions, I shall lose my authority. I am in a very difficult situation”.

But the suffering masses refused to yield. They were prepared to fight and dragged their leaders willy-nilly behind them.

As the movement surged forward a grotesque brutality was unleashed by the Pakistani army. It was assisted by the vigilantes of ‘Al-badr’ and ‘Al- Shams’, subsidiaries of Jamaat a Islami, in perpetuating this mass genocide of the Bengali people. But the movement defied this tyranny and the armed struggle led by the left wing of the Mukti Bahini and the JSD(Jatyo Samajtantrik Dal) began to liberate more and more areas from the clutches of the state.

In these villages and towns a new social and economic order under the control of punchayats (soviets) began to emerge. The leaders of these movements hinted openly that the future state would be socialist. They sharply criticized the leaders of the A.L. who had fled to India and where they had formed a government-in-exile with the support of the government.

The Indian bourgeoisie was getting alarmed at these developments. Indira Gandhi had realised that there was now no chance of the Pakistan army defeating the uprising and any delay could lead to the demise of capitalism throughout South Asia. Thus the Indian Army invaded East Pakistan on 3 December 1971. Its main aim was not to defeat the Pakistan army, already in retreat, but to crush the soviets that had mushroomed during the liberation struggle. The US imperialists had sent the Seventh fleet into the Bay of Bengal in case the Indian army should fail to prove itself up to the task.

A revolution was thus derailed. Under capitalism “independent” Bangladesh is now in a severe crisis. Poverty, misery and destitution stalk this “liberated” land. A young girl worker in a garments factory commented on the working conditions, “We consider prostitution a much privileged job compared to the drudgery we have to endure”.

In spite of all this, there are frequent general strikes and wave after wave of struggles of the workers and the youth. It is their task to complete Bengal’s unfinished revolution.