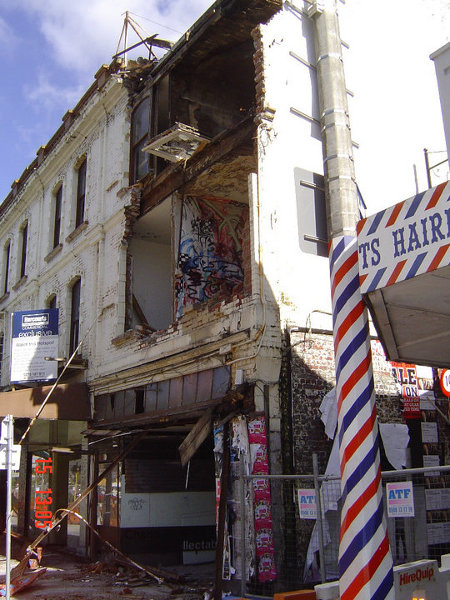 The recent earthquake that hit Christchurch in New Zealand, reveals on the one hand how a quake of the same strength as that that hit Haiti can have very different effects, depending on the level of economic development and the local infrastructure. No one was killed in New Zealand! In spite of this, problems remain, and as always it is the workers who are on the bottom rung of the ladder.

The recent magnitude 7.1 earthquake and the numerous aftershocks in Christchurch and the surrounding area are a reminder to us all that we live on the 'Shaky Islands'. Socialist Appeal-New Zealand sends its sympathies to all those affected by the earthquake and especially those that face uncertainty over their housing provisions and jobs.

It has often been said that the fact that no one was killed in the earthquake was miraculous. Two facts that suggest that this wasn't miraculous are the earthquake struck in the early morning when everyone was in bed and therefore no one was near or in the old buildings in the CBD that collapsed, and more importantly that there is a strict building code that has been in place since the devastating Napier earthquake in 1931, and has subsequently been improved over time. Right-wing advocates say that there is no need for strict regulations in New Zealand. If you hear that remind them about Christchurch and how in fact strict regulation saved countless lives.

It will take years for Christchurch to rebuild. In fact large numbers of properties will be condemned and have to be re-built if it is possible to do so. It has come to light that whole suburbs of Christchurch were built on areas that are prone to liquefaction and that the council knew this. The future of these areas remains uncertain and the council must be made accountable if it has granted building consents knowing this.

The bill for reconstruction stands at an estimated $4 billion. This is likely to double or even treble as the extent of the damage to the infrastructure is still being assessed. It has been noted that insurance premiums payments are down in New Zealand due to the recession thus affecting the levy for the Fire Service. Prior to this event the Government ordered the cutting of the earthquake-proofing of fire stations in order to save $25 million. No doubt the fire service has recently changed the Government’s mind. No doubt the Government will cut public services further to help pay for Christchurch. This may be tolerated for a while, but not for too long. The anarchy and limits of the capitalist system will be exposed.

A housing crisis is looming and there appear to be no solutions coming from government. People are bound to be under-insured or not insured as they cannot afford the premiums. Earthquake Recovery Minister Gerry Brownlee has already stated that the uninsured will go to the back of the queue with regard to housing. As the dust settles on the disaster the class lines will come to the fore as workers and the most vulnerable will have to struggle to re-build their lives. The labour and trade union movement must take up these challenges and ensure that 'emergency powers' passed in Parliament are not used against workers.

The only way forward is a democratic planned economy that will guarantee workers and the vulnerable a new home regardless of personal circumstances.