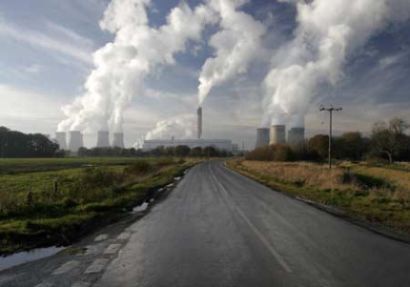 People are right to worry about emissions of greenhouse gases by big business and the threat they pose to the future of the planet. However, climate change is not happening on account of ‘human nature,’ because people are naturally greedy. Growth is not the problem. The problem is unplanned capitalist growth, growth driven by narrow selfish profit calculation and unconcerned with any wider considerations. The problem is capitalism.

People are right to worry about emissions of greenhouse gases by big business and the threat they pose to the future of the planet. Workers and young people are right to demonstrate and rally with the Campaign against Climate Change on December 5th [Demonstration in London last Saturday], to show their concern that the Copenhagen summit will prove to be a fudge that does not address the real problems.

Though it is true that the climate has changed many times in the history of the earth, the acceleration in the amount of carbon dioxide in the atmosphere has been remarkable. From 280 parts per million (ppm) before the industrial revolution, it’s now 430 ppm and could reach 550 ppm by 2050. Carbon dioxide is called a greenhouse gas because it traps heat inside the earth’s atmosphere like a greenhouse and so contributes to global warming. ‘Optimists’ believe average temperatures could rise by 2 degrees Celsius by 2050, with pessimists putting the heat gain at 5 degrees. It is no exaggeration to say that climate change poses the most catastrophic threat to human existence on earth.

We are already seeing the ice sheets and glaciers near the poles melting. This could lead to a rise in sea levels, making coastal areas uninhabitable. Unpredictable changes in weather patterns could cause desertification of large parts of the earth’s surface. This in turn will put pressure on capitalists to cut or burn down the rain forests in search of more agricultural land. But the rain forests serve as a carbon sink, capturing carbon. As they are burned down, more emissions are released, which speeds up the climate change. We also seem to be entering a new era of mass extinctions as human action destroys the habitats of thousands of animal and vegetable species.

All this is happening, no doubt about it. But we socialists do not regard this as inevitable. It is happening because the world is dominated by capitalism. Capitalism is a system driven by profit. Capitalists do not and cannot concern themselves with the destruction of the environment. In fact the system has grown to rely on the burning of carbon fuels, which have been formed in the earth over a period of hundreds of millions of years.

There are signs that we are already approaching peak oil. Capitalism has managed to destroy a treasure built up over ages in the course of a couple of centuries. In the process they are polluting the earth to a point where it is in danger of becoming uninhabitable.

Climate change is not happening on account of ‘human nature,’ because people are naturally greedy. Growth is not the problem. The problem is unplanned capitalist growth, growth driven by narrow selfish profit calculation and unconcerned with any wider considerations. The problem is capitalism. The problem is also that governments all over world are the creatures of big business, which is responsible for the emissions. That is why governments at Copenhagen are likely to duck and dive rather than commit to the drastic measures necessary to save the planet.

Human beings are not stupid. But working class people don’t run the world. Big business takes all the important decisions. If working people are able to plan the economy democratically, they will be determined to protect our planet, our home. We need a world socialist planned economy to deal with the environmental crisis.

As Marx said: “From the standpoint of a higher economic form of society, private ownership of the globe by single individuals will appear quite as absurd as private ownership of one man by another. Even a whole society, a nation, or even all simultaneously existing societies taken together, are not the owners of the globe. They are only its possessors…they must hand it down to succeeding generations in an improved condition.”