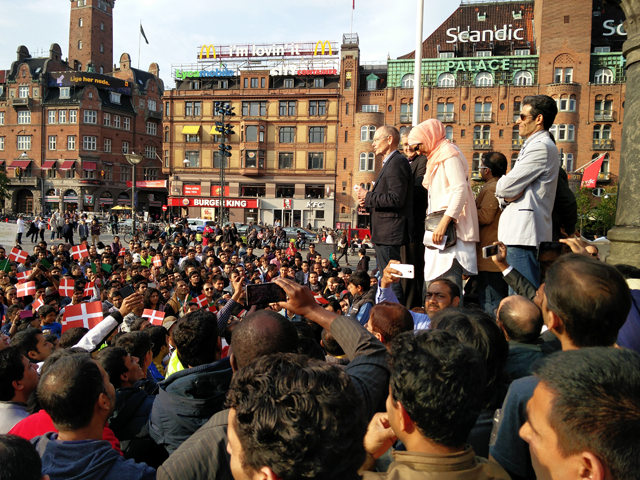 This article was published on Friday 20 May in Revolt, an English language Marxist paper published by Revolutionære Socialister in Denmark

Yesterday hundreds of demonstrators took to the streets in Copenhagen protesting against the proposed new bill (L169) which terminates the Danish green card program. The reason for the protest is that the bill - if it is passed - will take away the future of hundreds, if not thousands of young, highly qualified people from various countries, who work as dish washers, waiters, drivers and other tough odd jobs on the buttom of the labour market.

These people, who will be affected by the law, are all highly educated, skilled graduates from different universities around the world, who left their jobs and families and came to Denmark for a better future but, due to language barriers, racist profiling and a competitive labour market, are not able to get (find) jobs which fit their qualifications. Instead they have to work extremely hard on low wages to live up to the high requirements of the immigration laws regarding annual income etc. Up until now, they have had the goal and hope of achieving permanent residency, if only they worked hard enough and long enough.

Now this hope is being quashed by the left wing parties (with the exception of Alternativet) and the racist and national-conservative Dansk Folkeparti, who want to abolish the green card program by passing bill L169. To end the green card program might sound OK, because the Danish labour market is not able to adjust these highly qualified skilled workers, but the problem is that the people who are already here with a green card, and have been working in Denmark for years, will not be able to extend their green card visa and thereby qualify for permanent residency. So this law will turn all their effort, all their hard work into dust. Moreover; many of them will find it difficult to use their educational diplomas in their native countries, because their resumes have been “stained” by washing dishes, cleaning etc. for years.

At the demonstration yesterday, Finn Sørensen from Enhedslisten, the most left wing party in parliament, spoke. He explained that there were too many highly educated people coming to Denmark, who were now working in unskilled jobs, taking away jobs from Danish workers. For this reason, Enhedslisten wants to stop the green card program. But, he explained, people already here in Denmark with a green card should not be affected. For this reason Enhedslisten had been negotiating with the Social Demokrats, SF and Dansk Folkeparti. And they had “succeeded” in getting their backing for amendments which will allow current green card holders to extend their green card until 10th June 2018. So far, so good.

The problem is, however, that all green card holders who got their green card after 10th of September 2014, will not be able to extend their visa or apply for permanent residency due technical reasons and hence they will have to leave the country. In other words: all of their efforts and the troubles they have had to face will go in vain. They have worked, paid their taxes and suffered humiliating working conditions – all for nothing. This will probably affect more than one thousand workers. Of course those doing professional jobs, which are only 20 percent of the green card holders, will be able to dodge the bullets leaving those doing the hardest working class jobs in the gutter. 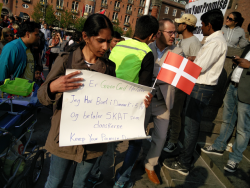 Photo: RevolutionBut despite this, Enhedslisten's MPs (supposedly socialist MPs), are still supporting the bill, alongside Dansk Folkeparti. This is plain racist and completely senseless. Enhedslisten and the rest of the Danish labour movement should stand united against this new political attack on immigrants. Ending the green card program is one thing. But once people are on the program, you cannot use them and then throw them away like garbage.

Stand up and fight

Many of the green card holders are desperate and afraid. Afraid of their uncertain future, afraid of coming off as “not integrated enough”, “not polite enough”, “not loving Denmark enough” etc. This fear stems from the racist offensive launched by the the political establishment and the media, which has been going on for years, and has only accelerated as the economic problems in Danish and international Capitalism have developed. It is policy of divide and rule, to keep the working class weak.

While it is understandable that the organisers and demonstrators in yesterday’s demonstration wanted to make clear that they don't want trouble, that they just want to live their life in peace and not have their future torn to pieces, there must be a limit.

To chant “we love Denmark” and wave Danish flags, while you are being kicked in the face, figuratively speaking, is too much. Don't applaud politicians who sell out on one half of the protesters. Do not trust these people. Stand up for yourselves, unite and fight. Trust only your own strength and unity. And fight to win. Put pressure on especially Enhedslisten and SF. If these two parties back down, there is no majority. Arrange demonstrations outside their party-headquarters. A campaign of strength could force them to withdraw their support for the proposal entirely, until it is made so as not to harm the lives of people already living in Denmark.

L169 is just the latest political attack in a long line of political attacks on immigrants in Denmark. Revolutionære Socialister – the Danish section of the International Marxist Tendency – will do everything in our power to support the just struggle of the green card holders, in defence of their future, on a class basis. 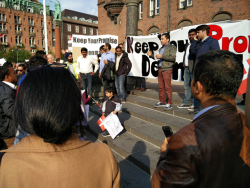 Photo: RevolutionIn the end, nationalist bigotry and the anti-immigration policies of the political establishment is the product of a capitalist system dying on its feet. Only in capitalism can an influx of highly educated and motivated people be a burden on society. This system is absurd and rotten. Clear out the rot. Join us in the struggle for a socialist transformation of society: A society of full employment and dignity where the true potential of everybody can flourish. Join Revolutionære Socialister - the Danish section of the International Marxist Tendency.

“The workers have no country… Workers of the world unite!”