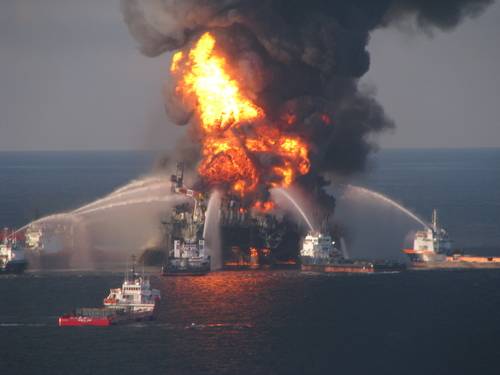 Much is said in the news about the disastrous situation that now exists in the Gulf of Mexico as a result of the Deepwater Horizon explosion. An ecological disaster of gigantic proportions has been created by the profit motive, which is what drives the BP executives. However, were the company to be thoroughly unionised, with workers’ representatives controlling every level of safety, this disaster could have been averted.

Amidst the acres of newsprint about the Deepwater Horizon blowout little has been said about those who are most affected - the BP workforce.

The mood in Sunbury, in the BP head offices, is a mixture of denial and anxiety, expressed in a bitter gallows humour and blunt cynicism. Long-term employees have had several decades of management cock-ups, re-organisations, cut backs, more re-organisations, and more cut-backs. Everywhere, whether in the office decor or the lines on people’s faces, are the symptoms of 20 years of lucrative deals at the top which eventually have brought this company to its knees. Nobody - nobody - is surprised at what has happened. Every long term employee knows what lies behind this disaster. Since the 1990s the company has been running on thin air, vital services have been outsourced, and quality, like the pipelines, has decayed. "The new paradigm", the Thatcherite policy of cutting to the bone and outsourcing to the cheapest bidder, has turned into the old paradigm - long hours, poor quality, insecurity and stress.

Bland e-mails from management attempting to revive morale merely infuriate and do the opposite. All eyes are on the blogs and livefeeds as the relief wells inch to their target. (By the time this is published they may have reached it - or may have missed.) The fear is growing that people’s jobs, their mortgages, their families, their children, their hopes, now depend on the success or failure of those wells. And even if they succeed that may not be enough. The Financial Times recently described how an employee in the finance department was in tears when they were told $20 billion dollars was needed from the credit markets. More recently the statements in the Financial Times have been blunter - if the relief wells miss, the company is dead. There is real gut-wrenching fear amongst some employees - fear that leaves them wide awake and sweating in the middle of the night.

The best case scenario would be a handout from, say, a Middle Eastern sovereign wealth fund that buys into the company. Abu Dhabi has been mentioned. Perhaps operations in the UK could continue unchanged, at least in the short or medium term. Or perhaps ExxonMobil, Shell, or one of the other majors will buy the company at a knock-down price. Then half the jobs will go in Sunbury and Aberdeen - the new owners would asset strip, remove what they didn't need, buy the acreage and the licenses but throw away the rest. The North Sea, already in decline, would be of little interest to them and the run-down there would accelerate. The knock-on effect to jobs in the UK would be catastrophic.

And then there is the worst case scenario ‑ rumours are circulating that there are off-balance sheet debts and, like Enron, this company could collapse.

As for the North American operations ‑ the US oil majors are circling like vultures round their prey. They rub their hands with glee at the extra political leverage this disaster gives them. Licenses and permits will be up for grabs. Perhaps the operation will be sold. Or perhaps the debt and costs will all be parked on BP America and it will be bankrupt. In either case there will be massive job losses.

What can be done? There is limited union representation in BP in the UK, and none in the main offices in Sunbury and Aberdeen. Now is the time for a company-wide campaign of union recruitment. This would meet with a massive response from top to bottom, even from the most privileged of senior office staff.

A union could be the focus of solid opposition to more job losses. A unionised work force could mount a fight against any redundancies, voluntary or otherwise - and for protection of the North Sea investment. Not for patriotic reasons but for preservation of jobs and industries - fundamentally for preservation of the wealth and technology created by the labour of two generations of oil workers in the North Sea.

The current safety rep system on the rigs needs a thorough overall. The two-year fixed term must be ended and replaced by the right of instant recall by those who voted for the rep. No more careerism and toadying to management!

The system should be extended to the Sunbury and Aberdeen offices. All asset and project teams must include an elected safety watchdog. These must be given funding from the company to allow commissioning of independent research, and in particular to obtain a genuinely independent assessment of sub-contractor activities. In too many areas the necessary expertise is no longer there as a result of the cutbacks over the last 20 years.

A joint union/safety rep committee should be established in Sunbury and Aberdeen that investigates and reviews all planning and investment decisions where safety or environmental issues are involved. The committee should have the power to veto any that are unsafe with the sanction of strike action if management do not accept their decisions.

Union reps should demand full access to the books and commission an independent audit to investigate any off balance-sheet items or other financial tricks in the company accounting. No dividends until a union-led financial and safety audit is complete!

If management do not comply, the ultimate sanction is removal of all senior management except those with required and proven technical skills. (1 in 5? Less?) Supervision of those remaining by elected workforce reps. Plus removal of the board and replacement by a team consisting of 1/3 employee, 1/3 union and 1/3 government representatives, running a newly (re-)nationalised BP.

This is how to put a stop to the activities of BP's private owners and their reckless pursuit of profit at any cost. This has wrecked this company and now threatens the livelihood of all its employees, and of many millions of others.