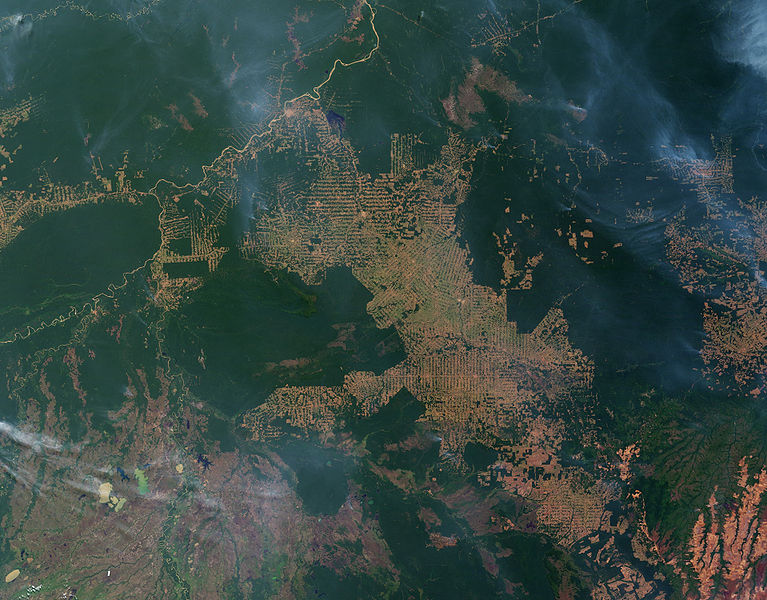 We are publishing the following statement by Esquerda Marxista, the IMT in Brazil, about President Bolsonaro's destructive policies towards the Amazon Rainforest, which have caused widespread devastation and wreaked havoc on the lives on indigenous peoples and poor peasantry. Originally released in Portuguese on 20 August 2019.

In the last month, the Amazon rainforest has been the centre of attention for Bolsonaro’s government. After a prolonged arm-wrestling match that culminated with the sacking of Ricardo Galvão as Director of the National Institute for Space Research (INPE), the Bonaparte wannabe is putting on a show of bravado in a spat with some of the wealthiest countries in Europe about the region’s conservation.

The dispute started when the INPE revealed the annual deforestation rate, which has increased 40 percent over the previous one-year period. The numbers were growing above average especially since May. July witnessed the largest loss of vegetation in any single month since 2015, with a deforested area 212 percent higher than that of July 2017.

Unable to come up with a plausible defence, Bolsonaro accused INPE of publishing fake data and said that the government would reveal the “real data”, which never happened. In response to the government’s policy, Germany and Norway suspended their donations to the Amazon Fund, a major source of funding for the Brazilian Institute of the Environment and Renewable Natural Resources (IBAMA) and the state-level environmental agencies in the Legal Amazon region and in five other Brazilian states.

Cornered, Bolsonaro once again sought refuge in nationalist rhetoric and the defence of “Amazonia’s sovereignty”. Contradictorily, his project for the region is to open it to mining, logging, and oil extraction by multinational companies. Moreover, the president seems to have forgotten to coordinate his message with his Environment Minister. In a TV debate with Ricardo Galvão, minister Ricardo Salles criticised the “nationalist” arguments of the scientist and called for the use of a foreign system for monitoring the Amazon, as INPE’s would allegedly not be “up to date”.

The truth is that Bolsonaro isn’t capable of offering to the peoples who live in and depend on the Amazon anything but death and destruction; in other words, capitalist barbarism. It is enough to check the list of campaign donors to his ministers to understand that, behind the president’s pathetic utterances, lie very well-articulated business interests.

One should have no illusions in the ability of any capitalist government to protect the region. During the governments of Lula and Dilma, the conflict between indigenous people, ribeirinhos, and peasants on one side; and prospectors, loggers, landowners and their gunmen on the other, caused dozens of deaths and has destroyed entire communities.

Capitalism is killing the Amazon

The construction of the Belo Monte hydroelectric dam, forcibly pushed through by Dilma’s government against all warnings, pushed whole populations into misery and condemned to beggary, prostitution, and marginality peoples that had formerly been able to live off the forest. Norway, the source of 98 percent of donations to the Amazon Fund, is one of the major shareholders of the mining company Hydro Alunorte, which had a clandestine pipeline to discharge untreated toxic waste into springs in the Barcarena municipality, in the interior of the state of Pará.

Agrobusiness, the main culprit behind the Amazon’s deforestation to clear land for cattle ranching and plantations, had its greatest growth during the Lula governments. Contrary to the sector’s propaganda, the majority of production in the latifundia is not of food, but rather commodities such as corn and soy which go directly to the international market. The governments led by the PT (the Workers’ Party of Dilma and Lula) made big concessions to these groups in their obsessive search for a primary budget surplus, whose only function is to pay interest on and amortisations of the public debt.

The result has been that the Amazon accounts for 56 percent of land conflicts registered in Brazil, according to the Pastoral Land Commission (CPT). The survey on land conflicts, “Caderno de Conflitos do Campo”, published by the CPT, revealed that there were 24 murders, 17 attempted murders, and 121 death threats related to the agrarian conflict in the region. These numbers are from 2018, but the tendency, given Bolsonaro’s policies, is for an increase this year.

In support of Bolsonaro’s environmental policies, landowners staged a “Day of Fire” on 10 and 11 August, during which coordinated fires were set, intensifying the burning especially in the south of the Amazon. As a result, on the 19th, the city of São Paulo was covered by a black cloud that darkened the city in the middle of the afternoon. The rain that followed was completely black. Researchers from the University of São Paulo (USP) and the Municipal University of São Caetano do Sul (USCS) detected particles related to forest burning.

Science has already shown that the wealth of the Amazon will be infinitely greater if the forest is kept standing. But a rational use of these resources is only possible under an economy controlled by the workers and not by the companies who profit much faster from its destruction. It is necessary to fight the root of the violence to which workers, peasants, and the oppressed peoples of the Amazon are subjected. It is necessary to fight against capitalism.