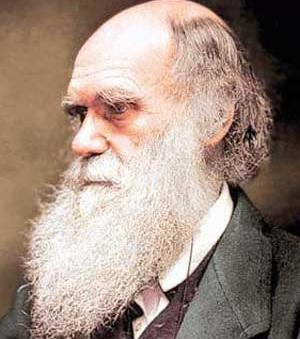 This month marks the 150th anniversary of the publication of Origin of Species by Charles Darwin. This book revolutionised thinking about the living world because for the first time it provided an explanation for the evolution of species. It was a triumph of the materialist world outlook and for that reason its publication was celebrated by Marx and Engels.

November marks the 150th anniversary of the publication of Origin of Species by Charles Darwin. This book revolutionised thinking about the living world because for the first time it provided an explanation for the evolution of species, something that was long suspected by scientists. Darwin’s simple idea – change by natural selection – is arguably the single most important foundation-stone upon which all modern biology is based. The Origin of Species was a triumph of the materialist world outlook, even if Darwin himself didn’t quite put it that way, and for that reason its publication was celebrated by Marx and Engels.

For the first time, Darwin gave a coherent and consistent explanation for evolution. Moreover, it was based on chance and random developments in the natural environment and not in the slightest on any cosmic purpose. There was no place in Origin, in other words, for God. Not surprisingly, it roused the ire of the whole Christian community. The good and the great lined up to oppose Darwin’s perfidious doctrine and in the years after Origin first saw the light of day hundreds of polemical works were published to denounce it.

Darwin himself regretted that there wasn’t more direct evidence of evolution in the form of fossils ‘intermediate’ between species. He was also acutely aware that the physiological and biochemical mechanisms of inheritance were at that time unknown.

However since 1859, Darwin’s ideas have been confirmed over and over again by scientific discovery. Darwinism – and it is the only ‘-ism’ named after a scientist – has been extended, deepened and developed by the work of millions of scientists. A whole branch of science – genetics – has unravelled the biochemical mechanisms behind inheritance, as well as variation and mutation within species, all of which play key roles in human evolution. The fossil record, showing the transition from species to species is also immeasurably more extensive than it was in Darwin’s day and this is no less true when applied to the understanding of human evolution.

Within a generation of Darwin’s death, evolution by natural selection became the established belief of the overwhelming majority of scientists and it remains the case to this day. Even the Church of England has now officially apologised for its ‘error’ in denouncing evolution in 1859.

Only last year, the Rev Malcolm Brown, Director of a key Church of England body, wrote on the Church’s website, addressing Charles Darwin, “the Church of England owes you an apology for misunderstanding you”. There was not so much a ‘misunderstanding’ as an unacceptable undermining of faith in God, as Brown himself suggests in further comments. “[Darwin’s] theory caused offence because it challenged the view that God had created human beings as an entirely different kind of creation to the rest of the animal world.”

This apology signifies the often reluctant acceptance of evolution by most Christians – how could it be otherwise, faced with a mountain of scientific evidence? But there is still a vociferous minority of Christians, Muslims and Jews who are fiercely opposed to the very idea of evolution.

The old-style ‘creationists’ who peddle a literal interpretation of religious scripture are in an ever-dwindling minority, along with flat-earthers and people who believe in fairies. But assailed on all sides by scientific evidence, they have now taken to dressing up their ideas in pseudo-scientific argument and re-packaging them as ‘Intelligent Design’. They trot out a few token scientists to give added ‘authenticity’ to their view and by this means have attempted to confuse the general public.

And who do they think was the ‘intelligence’ behind the ‘design’? The ID proponents aren’t believers in the Flying Spaghetti Monster or in the Norse creation myth or any one of a thousand other creation myths – in the US and UK at least, they are a front for the creationists of the Old Testament. 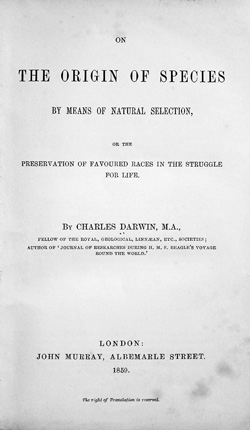 The title page of the 1859 edition of On the Origin of Species Their main line of argument is exactly the same as that used by William Paley, a contemporary and opponent of Darwin. He argued that no-one who examined a fob-watch could deny its complexity or that it wasn’t designed and made by someone. By analogy, he argued, the complexities of the natural world, (chiefly Mankind, it has to be said) must have been made by a higher being.

Similarly, ID believers today talk about “irreducible complexity”, by which they mean that some natural structures are “too complex” to have evolved piecemeal. They cite examples like the human eye, the immune system and bacterial flagella, suggesting that in such cases a ‘half evolved’ organ would be useless and therefore wouldn’t exist in nature. It has to be either complete, with all its complexity, or it can’t exist.

In fact the IDers have been proved wrong in every example they have given. Natural selection doesn’t create ready made complexity out of nothing but accumulates improvements, no matter how simple a structure may be to begin with. The wonderful world of nature has many examples of basic light-sensitive structures in living animals and by analogy evolution can reflect several ‘stages’ of eye structure, each more complex than the last. Similarly, there are very simple immune systems and rudimentary flagella within the animal kingdom. In fact, every example of “irreducible complexity” has been debunked as a red herring.

The creationist lobby has campaigned vociferously to have ID included in the school science curriculum on the grounds that ID and evolution are both just ‘theories’, one as valid as the other. In fact, creationism is not a scientific theory or remotely like one. In Science, theories are scrutinised and tested against observed experimental evidence. ID/creationism stands in splendid isolation from the whole concept of experimental verification and is based entirely on faith – whatever the evidence.

Despite being completely hollow as a ‘scientific’ idea, Creationism/Intelligent Design represents a powerful political lobby in the United States and in the UK, invariably associated with the extreme right ‘neo-con’ wing of the political spectrum. Those who push the Old Testament as a science text are also rabid opponents of abortion rights and gay rights. They oppose sex education in schools and the availability of contraceptives to young people.

The organisations that seek to undermine science are not short of a pound or two. In 2007, a $27m creationist theme park was opened in Kentucky USA. This Fred Flintstone-esque park has model dinosaurs living alongside human beings, prior to the Flood which wiped out all life except what was saved in Noah’s Ark. The manifesto of the Centre for the Renewal of Science and Culture, one of the principal creationist organisations even admits that the ‘Intelligent Design’ strategy is the thin end of a wedge aimed to promote Biblical creationism. “Design theory promises to reverse the stifling dominance of the materialist worldview, and replace it with a science consonant with Christian and theistic convictions…our strategy is intended to function as a wedge…”

The ‘theocons’ in the United States have fought for years for the introduction of a voucher scheme for education to force the state to pay for private and faith-based schools, despite that referenda have overwhelmingly rejected this idea in one state after another. Nevertheless, rich foundations pour millions of dollars into publicity campaigns. The Walton Family Foundation in 2006 alone poured over $28m into various pro-voucher organisations. This foundation is supported by the profits of Wal-Mart, one of the most vicious anti-union organisations in the USA.

Then there is the very wealthy American Templeton Foundation which in 2006 disbursed over $60m to hundreds of projects and individuals who were able to reconcile science with ‘spiritual’ values. Teachers, students, journalists, medical researchers and all kinds of academics have been ‘bought’ all over the world but particularly in the USA and UK. Tens of thousands of dollars are disbursed to hundreds of university faculties that sponsor courses on the reciprocity of science and religion. An article in the US Chronicle of Higher Education estimates that the Foundation has spent over £250m dollars undermining science and state education in this way.

The Foundation openly supports the cause of capitalism and ‘free’ enterprise. According to the blurb on its website it “supports a range of programs intended to liberate the initiative of individuals and nations and to establish the necessary conditions for the success of profit-making enterprise”. As an example of its agenda in Britain, the Foundation gave a two-year grant to the University of Newcastle Upon Tyne “to explore whether and to what extent private education” [read ‘vouchers’ again] benefits the poor in developing countries of Africa and Asia.

In Britain, another champion of creationism is the Vardy Foundation, based on the wealth of the Vardy car sales business. One of the main activities of the foundation has been the sponsorship of schools “with a Christian ethos.” Their Emmanuel Schools Foundation currently runs three schools and there is a fourth in the pipeline. Emmanuel Schools teach creationism alongside science in their curriculum.

Marxists believe that everyone should have the right to follow whatever religious practice and belief they choose. But there must be no mistake that in their social and political programme, these fundamentalist creationist organisations represent the interests of the capitalist class and pose a threat to the democratic rights built up by the labour movement over many years. They are not just a few cranks and crack-pots; they are a well-funded, well-organised and insidious reactionary force in society and need to be fought at every opportunity. A part of challenging their right wing agenda is opposing their undermining of Science and for that reason alone socialists should celebrate the publication of the Origin as a brilliant milestone in the development of a materialist world outlook.