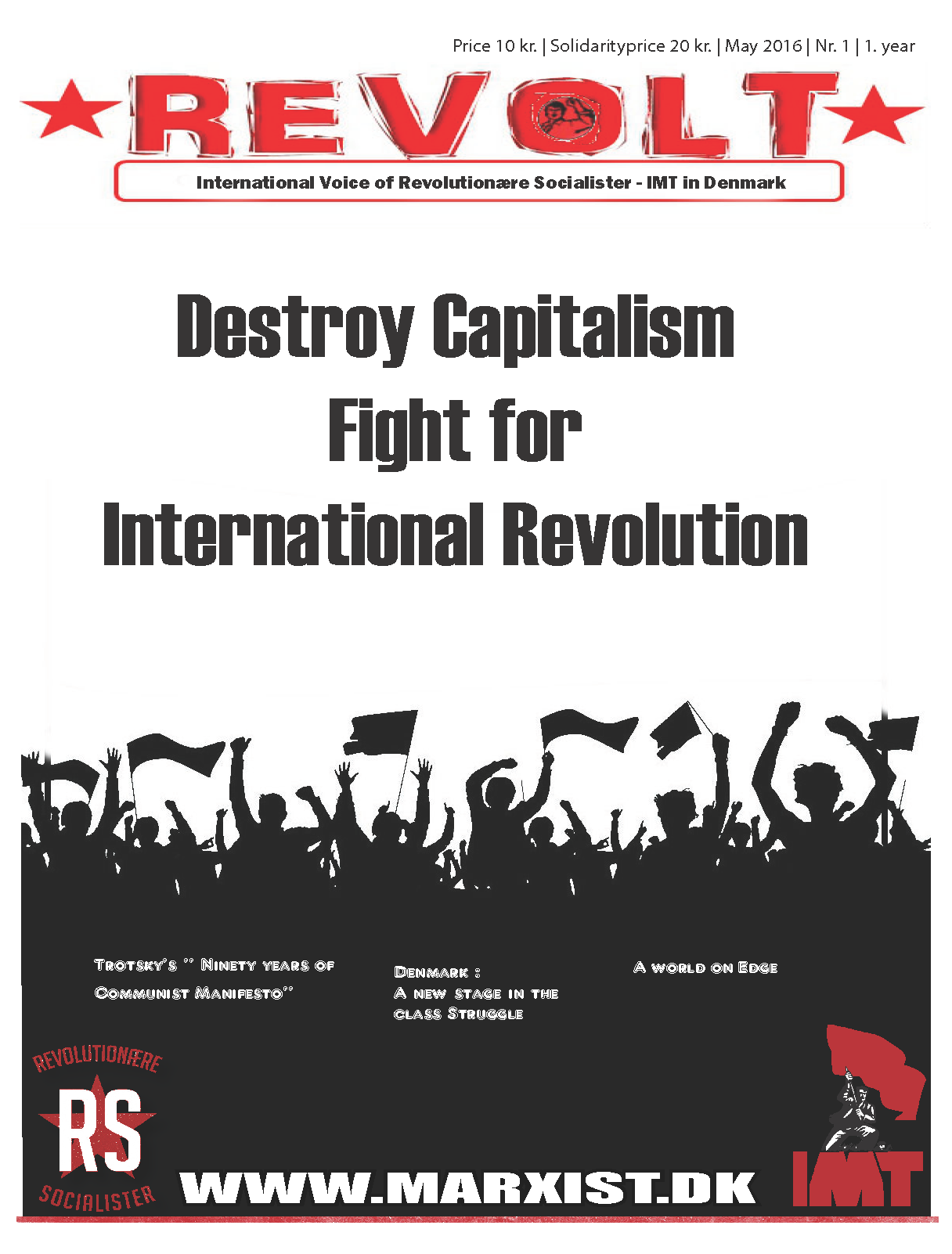 Below we publish the editorial of the new English language paper of the Danish Marxist organisation Revolutionary Socialists the new paper is aimed at the many non-Danish speaking workers and youth in Denmark.

We are living in an extraordinary period. A period of mass uprisings, wars and revolutions on a world scale. Events which were unimaginable yesterday are now happening on a daily basis. It is a period of horror and hope. The 2008 economic crash unleashed a chain of events across the globe. Every new event looks bigger and more decisive than the previous.  These events are inseparable and it is impossible to understand one without understanding the other. Besides the significance and connectivity, these events also occur so fast as to make one's head.

Throughout its evolution capitalism has created a global indivisible economic totality. The totality decides the fate of its component parts; that is the national economies.  It is impossible for a national economy to escape the crises of capitalism. This is what we are currently witnessing when economies like the Chinese, which was recently considered a miracle, didn't escape the fate of capitalism and is now heading towards a massive crisis, a crisis that will not only affect the world economy but also the biggest working class on the planet.

Unemployment, rising inequality, wars and mass displacement of whole populations have become commonplace. It is the sign of the decaying stage of capitalism. Capitalism, - once a progressive step in human history, – has become horror without end. On the other hand; the evolution of capitalism into a global economic whole also presents to us the possibility for the unity of struggle of the working class of the entire globe. The term “class solidarity” is not something imaginary. It is real and the bond of same class struggle. It is the way out for the emancipation of the working class. It is the demand of this era; that the working class, to escape the suffering and misery imposed by capital, must unite across national boundaries. This also applies within the national boundaries of the Danish state.

By dividing us along artificial ethnic, religious and national lines; through the implementation of racist policies and the most disgusting nationalist bigotry, the Danish ruling class along with their class companions in the rest of Europe, try to divert attention from the real and burning social issues in order to keep our class weak.

The class struggle in Denmark has yet to erupt. But make no mistake; enormous frustrations are simmering below the calm surface. The same processes of radicalisation are taking place in the Danish working class and youth as in other countries, like Greece, Spain and France.

When the class struggle erupts in Denmark we need to stand united as class and fight as one. And we need to be able to present a real alternative to the decaying capitalist system, on a sound theoretical basis. That is why Revolutionære Socialister, the Danish Section of the International Marxist Tendency is launching REVOLT; the first Danish Marxist paper in English, as a weapon alongside the Danish paper REVOLUTION to break through all obstacles on the path of class unity and revolution; including language barriers.

We want to unite the advanced layers of the working class and youth in a revolutionary organisation, that once it is strong enough will be able to channel the massive frustrations among the workers and youth towards a fight against the root cause of all the burning issues of today; Capitalism itself. Marxism is a tool to understand the workings of the capitalist system, the class struggle and the historic experiences of the international working class. Under the banner of true internationalism and the socialist transformation of society we will move forward. Join us!