Details
In Defence of Marxism
12 February 2006

Cuba
Share
Tweet
On February 9th, Alan Woods was invited to speak at the Centre of European Studies (CEE) in Havana. The meeting was attended by researchers from the CEE, journalists and members of the Cuban Institute for Friendship with the Peoples (Instituto Cubano de Amistad con los Pueblos, ICAP). The main theme of the discussion was the state of the class struggle in Europe.

On Thursday, February 9th, Alan Woods was invited to speak at the Centre of European Studies (CEE) in Havana. The meeting was attended by some 25 people, researchers from the CEE, journalists and members of the Cuban Institute for Friendship with the Peoples (Instituto Cubano de Amistad con los Pueblos, ICAP). 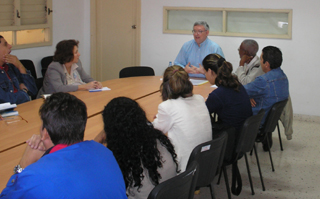 The main theme of the discussion, which lasted for nearly three hours, was the state of the class struggle in Europe. Though we cannot give a detailed account of everything that was said, one of Alan Woods’ main points was to explain how the long period of economic upswing that followed World War II had enormously strengthened the basis for reformism within the labour movement and its organisations in Europe, and how the leadership of the Communist Parties had become completely adapted to this. This reformist degeneration of the leading layers within the workers’ organisations was the main cause for the failure of a series of revolutionary and pre-revolutionary situations that many European countries experienced between 1968 and 1979, and which in turn led to a widespread demoralisation of a whole layer of worker activists that had seen power slip from through their fings. In the 1980s a new period of counter-reforms and attacks on living standards followed, on the basis of this political defeat.

But Alan also explained how in the last few years the situation in Europe had started to change. The relentless pressure of the ruling class against the living and working conditions, which the labour movement had won in previous decades, has started to provoke a backlash. He mentioned a number of general strikes and generalised movements of the working class in Europe which showed precisely this point, including the recent general strikes in Italy, Greece and Belgium.

Alan insisted that the symptoms were clear to many: wars, cuts in living standards, rising unemployment and inequality, etc. But he added that in different meetings at the Book Fair, the speakers had limited themselves to pointing these out and expressing their outrage, like a bad doctor that outlines the symptoms to the patient and then simply offer his sympathy, but no remedy. It is necessary to identify the root cause of the illness, the capitalist system itself, and say clearly that the only alternative is the struggle for the socialist transformation of society.

He criticised those who hide behind new words, in the manner of Orwell’s “newspeak” in 1984. They talk of “neo-liberalism”, as if there was a different, better, model under capitalism; of “globalisation” instead of imperialism, etc. 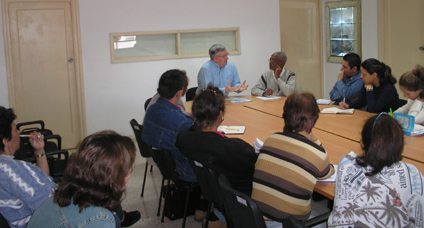 Once again, Alan said, the question of leadership is being posed. What is being posed is the need to build a revolutionary leadership, firmly based on the ideas of Marxism, which remain today as relevant as ever. He finally pointed out that in this task, comrades from different traditions are now meeting and opening up a dialogue, which he said it was very positive and should be encouraged.

The debate was lively and there were many questions, many more than could be answered, about the perspectives for the Italian elections and the role of the communists there, for the British Labour Party and trade unions, the developments in Northern Ireland, etc. The mood was one of a genuine exchange of ideas, and there was no disagreement with what Alan Woods had said in his opening remarks. All those present were very pleased with the meeting and Francisco Brown told Alan that he should make this a permanent fixture in his future trips to Cuba.

This meeting is just a small indication of the kind of debates that have been taking place in certain quarters in Cuba since the fall of the Soviet Union, an event that hit the island’s economy very hard. At the end of the day an understanding of the reasons for the fall of Stalinism is necessary for revolutionary socialists anywhere in the world, but the lessons are even more important for those who still defend the genuine revolutionary ideas of Marxism in Cuba.