Cuba
Share
Tweet
Last November 6 in the evening, on the eve of another anniversary of the October Revolution, around five hundred young Cubans gathered to celebrate the occasion. Still, those who find this piece of news unlikely or perplexing, regardless of what side they’re on, should make an extra reading for good measure: that’s right, Cuban youths hailed the Revolution. 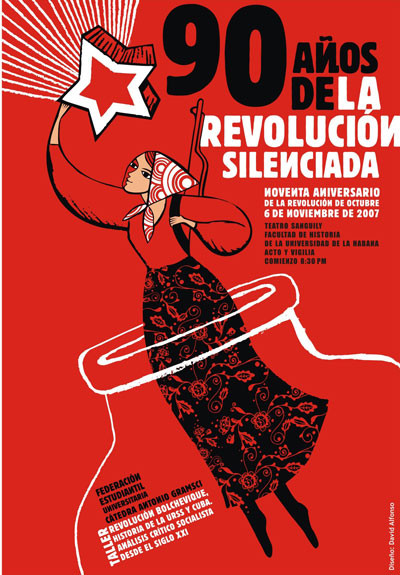 Last November 6 in the evening, on the eve of another anniversary of the October Revolution, around five hundred young Cubans gathered to celebrate the occasion. Still, those who find this piece of news unlikely or perplexing, regardless of what side they’re on, should make an extra reading for good measure: that’s right, Cuban youths hailed the Revolution.

United in a common, convincingly revolutionary cause, students from Havana University, as well as any other young Cuban willing to join them, were convened by the Federation of University Students (FEU) to hold a vigil for the "Ninety years of the Silenced Revolution". It's intention was to "extol the vitality of the October Revolution with a socialist invitation to a free, honest and revolutionary celebration".

There was an impressive turnout, more than twice as many people as the most optimistic of us ever expected to see. Nor did we anticipate their good qualities and passion. A whole University theater designed to seat large audiences proved to be too small. More significantly, the halls were crowded with dozens who came on their own volition, inspired by no instruction or plan to reach a target attendance. It was just a different idea, born of a socialist approach to the future which led to an act of faith in socialism based on the deconstruction of its surrounding silences.

That the October Revolution was silenced by Imperialism and Stalinism is a fact beyond question. Every available space in the theater was festooned with phrases, ideas and concepts forged in the heat of Revolution and eventually neglected by the bourgeois or bureaucratic powers that be, fully aware that these are enemy concepts accurately pointed at them. Marx, Lenin, Trotsky, Rosa Luxemburg and Preobrazhensky bombarded the students, who wrote down on their notepads, like astonished schoolchildren eager for knowledge, many ideas they had never heard before and found really stunning. The whole event was a true channel to give a liberating legacy the voice it had been long denied.

Images of the October heroic deed, like those of the Russian people taking to the streets in search of their fate, became the reason for reminiscing and reflection which brought us together that evening, presented from the opening speech and followed by songs and the rush to the big mural-like paper where we could all put our feelings in writing... this and much more served to liven up a get-together of revolutionary emotions organized by our youth to pay a categorically socialist past the tribute it deserved.

Fernando Rojas, a newly-graduated FEU leader, emphasized that we were engaged in a fresh interpretation of the past in order to be better equipped to deal with the present. As he remarked, “Without childish enthusiasm, irresponsibility and naiveté, we must keep pledging our commitment to and building the society we want. Let us check its boundaries and we’ll see how close they are to those of that October back in 1917.”

Close attention was paid as well to the words of Fernando Martínez Heredia, an old fighter who sided with and struggled for Cuba’s revolutionary ideas, as he evoked the essential harmony between knowledge and militant zeal and told the audience that ”with meetings like this to study and discuss that revolution, you are also hardening your own identity, getting to know yourselves better, widening the scope of your ideas and strengthening the foundations of your passion, views, rebelliousness and militancy.”

Once it was over, many of us stayed on campus for a sing-along at Cadenas square, Havana University’s historic heart. We all waited for the clock to strike 12 midnight to sing with one voice the International and the 26th of July anthem. It was so amazing! Those young Cubans singing two revolutionary songs, which ritualistic conventionality and censorship had damaged so badly, were a scene of great emotion that truly defied belief.

Contrary to what some silencing opportunists claim, we need to talk about, discuss and absorb the October events and their historic detour.  Our political fairness and responsibility compel us to remember the counterrevolutionary attacks on the Russian people in the 1930s and the resulting distortion, simplification and debasement of Marx’s revolutionary ideas. Taking these facts as our starting point will improve our ability to understand how it all worked for the benefit of capitalism in 1991.

When it comes to overall popular emancipation, only the truth can be unifying and redeeming. That is why prescribing a debate on the memories of the Revolution and whatever has been done on its behalf proves harmful to the unity of our people as they undertake a much-needed redefinition of Cuba’s socialist structures.

The homage was suggested and implemented by FEU and members of the “Antonio Gramsci” Department and the Standing Workshop “Bolshevik Revolution – History of the USSR and Cuba: a critical socialist approach from the 21st. Century”. The latter strives to make a comprehensive reading of the October Revolution, its consequences and impact on revolutionary thinking at international level and in Cuba from a Marxist viewpoint committed to Cuban socialism.

Over 500 young Cubans acclaimed the October Revolution and sang revolutionary marches, enough to raise hopes in today’s Cuba and to prove that those who keep trying to hush the issue and reciting ancient creeds are helpless when faced with a sector of youth determined to put up with unfinished interpretations no more than they are willing to resign themselves to benumbing silences. It’s proof of the Cuban youth’s commitment to our socialist future from a position of truth, revolutionary memory, the reconstruction of grounds already covered, an updated sense of their political affiliation and a socialist pledge to the Cuban Revolution.

Fernando Rojas’s words were well-aimed when he pointed out that “Today’s Cubans lack the keenness to get involved in politics and fuel an intense political activity, mainly among the youngest.” There’s no doubt, however, that all of us who were there felt immensely happy to see so much revolutionary, invigorating and socialist emotion among so many young Cubans, a resounding argument to assert that nothing is lost.

This is the English translation of Cuba, Octubre, jóvenes y futuro by Ariel Dacal Díaz (November 14, 2007)