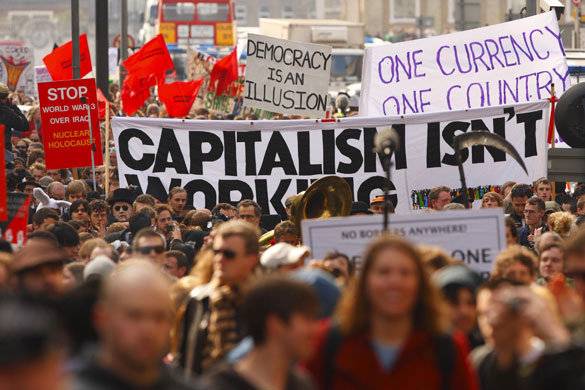 Everywhere you look there is upheaval and crisis, from Europe to Japan and to the United States. This reflects the worldwide malaise of capitalism that is struggling to emerge from the recent slump. This is a confirmation of Marxist ideas, which explains that capitalism is a crisis-ridden system.

“A variety of unpleasant shocks – revolution, natural disasters, rising food prices and debt crises – all signal choppy waters ahead”, explained Professor Eswar Prasad of Cornell University. If these constitute choppy waters, it would be difficult to imagine what stormy seas would be like. Clearly our professor is keen not to panic his audience.

What he is describing in the mildest terms is the turbulent situation facing capitalism on a world scale. Everywhere you look there is upheaval and crisis, from Europe to Japan and to the United States. This reflects the worldwide malaise of capitalism that is struggling to emerge from the recent slump. This is a confirmation of Marxist ideas, which explains that capitalism is a crisis-ridden system.

And this crisis has a long way to run yet. We are witnessing the next stage in the European crisis with the proposed bailout of Portugal. This followed the bailouts of Greece and then Ireland. All are being asked to swallow massive cuts to public spending. All face “shock therapy” of IMF austerity plans, which will cut into the market and produce even greater instability. As a result of the crisis, governments are more unpopular than ever. Governments have already fallen in Iceland, Portugal and Ireland. Spain is clearly next with Zapatero announcing his intentions to stand down and there are more to follow.

Even the general election result in little Finland is causing huge ripples. The rise of the populist anti-EU True Finns party, mainly due to public anger over bailouts, threatens the proposed bailout for Portugal. The party is now likely to enter the government and is sure to play a big role in the negotiations. They are supported in their anti-EU stance by the Social Democrats. Unlike other countries, Finland requires parliamentary approval to take part in bailouts. However, the EU can only move forward with unanimous support, which is now in doubt.

In Greece, the government has launched a desperate and unpopular privatization programme in the vain hope of preventing a government default on its debts. Such a default  (“restructuring”) would have catastrophic consequences. “A restructuring that includes a sizeable haircut could open a Pandora’s box for the eurozone,” stated Yannis Stournaras, director of IOBE, the Athens think tank. “It could bring down Greek banks and have a contagion effect on Ireland, maybe even Portugal.”
Despite the austerity measures implemented in Greece, the crisis is unabated. Clemens Fuest, who chairs the German finance ministry’s technical committee, warned that Athens was heading for a default. The market has also factored in a default. The probability of a default by Greece rose to 67%, as shown by credit swaps. This probability was only 55% a month ago and shows the rapidly deteriorating situation. Greece’s public debt is set to rise this year from 140% of GDP to more than 150%, according to the IMF.

Ireland has already (once again) been forced to recapitalize its banks by a further 24bn euros, which will mean even greater austerity as the Irish are asked to dig deep to rescue the banks. The country was also downgraded a point by Standard and Poor’s, one of the main international credit agencies.

The Portuguese government has begun talks with the EU and IMF but the fear that any deal could unravel as a result of the Finnish election has sent Portugal’s borrowing costs soaring to new heights. There are fears that a deal will not be reached before 15 June to enable Portugal to meet 4.9bn euro debt repayments that fall due on that date.

The crisis of the eurozone’s peripheral economies has been exacerbated by financial speculators who are eager to make money from these difficulties. They act like hyenas in stalking their prey. They look for the weakest economy and speculate against its financial standing. Then they act collectively to bring it down. Whatever the short-term gains, this whole crisis threatens to undermine the euro.

This was developing before the Finnish result, which has simply made matters worse. If the contagion spreads to Spain or even Italy, the whole European Union project will be in jeopardy. We explained when the euro was launched in 1999 that this was likely to take place. A common currency embracing different economies moving at different rates was always going to be unstable. The only thing that has kept it afloat was the world boom. Once that came to an end, all the tensions within the eurozone would inevitably come to the surface, as we can now see.  The European Central Bank (ECB), which is in reality under German control, has now increased interest rates. This will certain add to the woes of weak economies such as the Portuguese, Greeks, and Irish.

The uncertainty of sovereign default and rising inflation has seen capitalist investors rushing into safer investments, sending the price of gold to record levels of over $1,500 an ounce. In 1971 it was $35 an ounce! With the systematic undermining of the dollar by quantitative easing (printing money), and the fear that the US could lose its triple A rating, the dollar has been pushed to a new low.

The potential downgrade of credit rating of the US has also introduced a new element of uncertainty into the foundations of global finance. Standard and Poor’s action was the first of such downgrades since the agency was set up 70 years ago. The problem is that US Treasury bonds represent the core of global reserve assets, with nearly half of the $9,000bn market held by foreign investors and central banks.

“If the triple A backbone of the global financial system is at risk of being lost, what happens to the rest of the credit structure?” asks Lena Komileva, global head of G10 strategy at Brown Brothers Harriman. It represents the ultimate chapter in the story of financial crisis. “It brings to the forefront the importance of sovereign risk,” adds Gibson Smith, co-chief investment officer at Janus Capital in Denver. “We need to be concerned about this from a market point of view and for overall systemic risk.”

This downgrade of the US debt is the first shot being fired over the eventual downgrading of the world’s largest economy and debtor nation. It reveals that the US has feet of clay. The public squabbling in Washington over the budget is making it more difficult to deal with the US public finances and debts. They all want cuts, but disagree on where and when. The financial surplus was frittered away in tax cuts, wars and bailouts that left the public finances in a monumental mess and the danger of a default. US public debt now stands at 112% of GDP, even worse than Britain and many troubled European countries. Some like Rob Arnott of Research Affiliates argue that the full picture is being disguised and the real debt is much higher. He believes it is well over 500% of GDP. Whatever the real figure, this is clearly unsustainable in the long run.

The Chinese government has certainly become worried by the situation, given its holdings of US dollars. China’s foreign reserves have now exceeded $3,000bn, about two-thirds of which are believed to be invested in US dollar assets.

The strategists of capital are at sixes and sevens. George Soros, the billionaire financier, stated: “I find the current situation much more baffling and much less predictable than I did at the time of the height of the financial crisis.”

The world economy is far from being on a stable path. The recovery is weak and anaemic. The financial sector is fragile. Government debt is approaching record postwar levels. There is the likelihood of countries defaulting on their debts and banks failing. Capitalism is in grave difficulty. The US fiscal position is simply one of a number of risks facing the capitalist world. Even before we have recovered from this crisis, in the next few years we will face a new world slump.

The system can soldier on for the next few years being buffeted by sudden deep shocks. However, resistance is mounting across the globe against the austerity programmes of various governments. Capitalism has become deeply unpopular. This will increase. It is now down to the labour and trade union movement to channel this opposition, not in patching up capitalism, but in its overthrow. Only then can the variety of crises we face be ended once and for all.