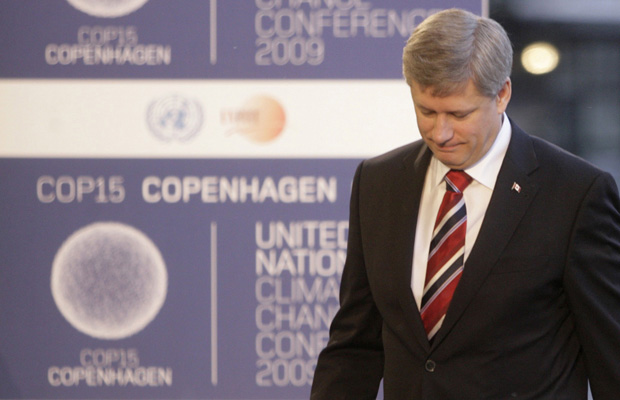 On Saturday, after two weeks of negotiations, the Climate Summit in Copenhagen ended in a complete failure. The outcome of the talks, a document known as the “Copenhagen Accord”, is merely a collection of hollow and vacuous statements, and does not contain any reference to a legally binding agreement.

At 5.30am on Saturday 19th December, after almost two weeks of negotiations, the UN Framework Convention on Climate Change in Copenhagen ended with an almost universal agreement that the summit had been a complete failure. The outcome of the Copenhagen talks was a meagre three-page document, forced through at the 11th hour in a backroom deal between the leaders of the US, China, India, Brazil, and South Africa. The document, known as the “Copenhagen Accord”, is merely a collection of hollow and vacuous statements, and does not contain any reference to a legally binding agreement.

The pathetic nature of the Copenhagen Accord is shown by its complete lack of targets for any CO2 emissions reductions. Instead, the document specifies that, “the increase in global temperature should be below 2ºC” – a temperature increase that many agree would still lead to a severe increase in the risk of flooding, droughts, and disease in developing countries. The Huffington Post, an American news website, stated that, “They didn't seal the deal; they sealed the coffin for the world's low-lying islands, its glaciers, its North Pole, and millions of lives."

Some commentators have tried to paint the Copenhagen summit as a success, citing the accord’s promise to provide developing countries with US$10bn per year for the next three years, with a goal of increasing this to $100bn per year by 2020. This financial assistance is paltry, and pales in comparison to the trillions of dollars that governments have thrown at the banking system in the recent period. The British government alone has spent £850bn (US$1.4trn) of taxpayers’ money bailing-out the banks, according to an official review by the National Audit Office. The French newspaper Libération commented that, “when it comes to rescuing the banking system, the dialogue has been far more effective and determined…it is clearly easier to save finance than it is to save the planet."

Before the Copenhagen talks had even begun, it was clear that targets on emissions reductions would not be reached. Both President Obama in the US and Prime Minister Rudd in Australia, despite being elected on the basis of their promises to combat climate change, have seen their plans for cap-and-trade schemes rejected or watered-down by senators who receive very generous donations from powerful lobbies and big-business. Meanwhile, the whole concept of carbon trading was massively discredited shortly before the start of the Copenhagen summit, when it was revealed that countries involved in the EU Emission Trading Scheme, such as Britain, France, and Denmark, had been the victims of a large-scale carbon scam by tax-fraudsters.

There is no doubt that the agreements made in Copenhagen are the result of pro-business governments that place all their faith of curbing climate change in the hands of the free-market. This is even explicitly stated in the Copenhagen Accord, which says that countries should “use markets, to enhance the cost-effectiveness of, and to promote mitigation actions.” Meanwhile, the clashes on display at the summit between the two largest CO2 emitters, the USA and China, have clearly got very little to do with protecting the planet, but are in fact about protecting the profits of big-business within their own borders. It is no secret that senators in the US have attempted to use the recent climate change bill as a modern means of protectionism, with Senators Kerry and Graham announcing that, “we should consider a border tax” on goods from countries with lax environmental standards.

The limits of international treaties to overcome the contradictions of the nation-state are not unique to the Copenhagen talks. A similar set of experiences was seen in the series of trade-negotiations organised by the World Trade Organisation (WTO), which began in Doha in 2001 and ended in complete collapse in Geneva in 2008. George Monbiot, making the analogy between the WTO talks and the climate change negotiations, said that, “When the initial deadline [for the WTO negotiations] had been missed and the red carpets were rolled up, governments lost interest and let the process drift.” The failure of the Copenhagen talks also bears a striking resemblance to the G8 Summit in 2005 and the associated Make Poverty History campaign, which began with much optimism, but ended with nothing but a set of shallow commitments.

The reality is that there will never be a solution to climate change – nor to poverty, war, and unemployment – on the basis of Capitalism. The Copenhagen negotiations, like the WTO talks and the G8 Summit before them, were tied to the logic of Capitalism, and were not able to get passed national interests in order to solve what is clearly an international problem. Evo Morales, the left wing President of Bolivia, summed it up in his speech to the Copenhagen conference, saying that, “The real cause of climate change is the capitalist system. If we want to save the earth then we must end that economic model. Capitalism wants to address climate change with carbon markets. We denounce those markets and the countries which promote them. It's time to stop making money from the disgrace that they have perpetrated."