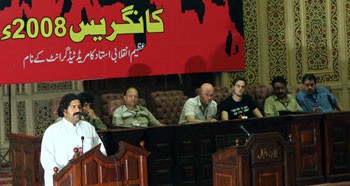 Comrade Ali Wazir is a proclaimed supporter of the IMT. His mass popularity and support in this primitive region - the so-called bastion of the Taliban - shows that if the struggle for a socialist revolution is conducted with correct tactics, courage and determination, Marxists can win the support in these extremely hazardous areas, especially amongst the students and the youth.

On the morning of December 6, the district council administration of Dera Ismail Khan started an operation against hawkers and street vendors in the Tank Adda by ransacking their kiosks and carts.

Under the aegis of Islamic fundamentalism, Jamaat-e-Islami’s local government minister for revenue, Inayat Ullah Wazir, the District Coordination Officer (DCO), Ali Khan, the District Municipal Officer other administration officials and the land branch of District Council along with police offices started this operation in the morning of the 6th.

Armed with guns, batons and demolition equipment, they attacked the poor on the pretext of clearing the space for the market. In reality though, the ministers from Jamaat-e-Islami want to grab 10 acres of land, which was leased to people who had been displaced by the military operation which took place earlier this year. The land for which these innocent victims had also paid rent was rented out to them till 2015.

The shops, which they tried to demolish, were approved from the municipality for a fee. These were not “illegal encroachments” as the Pakistani media has been reporting. Their status is legal in every way.The attack also came without any warning.

This state land, belonging to the District and Tehsil councils and worth billions of rupees, is now illegally occupied by mullahs in the government, the favourites of the provincial government of PTI and the billionaires, yet no action is taken against them.

The administration had no legal grounds for this operation, but they attacked to clear the land for land grabbers and started to load the shopkeepers’ goods on to municipality vehicles. The shopkeepers tried to show the DCO the lease papers and receipts of the rent they had paid for 2015 but he refused to see them and ordered the demolition of the shops. Left with no option the small shopkeepers locked themselves inside their shops, for it is better to die in the rubble than to be unemployed and see their families starve.

The police dragged them out of their shops and tortured them. Comrade Ali Wazir rushed to the scene and asked the DCO to stop the operation. The argument turned into a fight and shopkeepers, ordinary citizens and comrades started to gather in. The administration asked Ali Wazir and others to talk, but it was only a trap to arrest Ali, along with other activists.

The people of this second most important city in Pushtoonkhawa reacted angrily. In their wrath they started pelting stones at the police, who were brutally charging with batons and severely beating ordinary people who were trying to retaliate this state oppression.

Ali Wazir and his supporters were moved to a police station first, and then they were taken to the torture cells for the terrorists. As soon as the news spread though, the students of Gomal University and other educational institutions came out with protest rallies and blocked the main roads. Other workers and the lawyer colleagues of Ali also came out to join the mass protests. This created an enormous pressure on the state administration.

This city is on the periphery of Waziristan where an intense military operation is going on at the present time. Given the tense situation the district administration moved comrade Ali Wazir and his associates to the military cantonment. Case no. 980 was lodged against them under sections 148/149, 34/1, 2A-506/353, 427/337 and 786PPC.

Despite it being Sunday and the arrests being made without the possibility of bail, Comrade Ghufran and other lawyers from Dera Ismail Khan managed to post bails for the arrested after threatening to lock down the courts and seal the city. 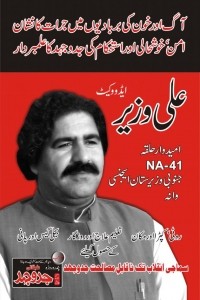 Election poster for Comrade Ali Wazir's 2013 campaignSupport also came in huge numbers, especially from the youth from Wana. This is the town in the center of the constituency from where Ali had contested the elections of 2013 in which he was defeated with a margin of just three hundred votes. This result however was clearly the result of rigging and it is being disputed the Courts.

The city rejoiced as Ali Wazir and others were released. For the first time the state barbarism was defeated. Meetings and rallies are being organized for comrade Ali Wazir in all the colleges, universities, and bazaars.

In solidarity with Ali Wazir and his associates, on December 7 there was a complete shut down and a strike from 9 am to 11 am. The various civic organisations and political activists congratulated Ali Wazir for this struggle.

The land mafias have suffered a blow but their plans are still there. Formation of a joint defence council of the poor shopkeepers, students and workers can consolidate this victory, for which the struggle continues.

In the garb of the military operation against the Taliban, the state is excessively vicious in this region, hence it is much more difficult to retaliate against it here than elsewhere in Pakistan. 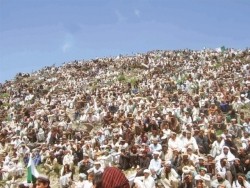 Thousands of people were mobilised in support of Ali Wazir during the electionsComrade Ali Wazir is a proclaimed supporter of the IMT. His mass popularity and support in this primitive region - the so-called bastion of the Taliban - shows that if the struggle for a socialist revolution is conducted with correct tactics, courage and determination, Marxists can win the support in these extremely hazardous areas, especially amongst the students and the youth.

After the release of Ali from prison there was a jubilant mood amongst the ordinary people in Dera Ismail Khan. The evicted Kiosk and small shopkeepers have started rebuilding their dwellings and makeshift structures demolished by the state administration at the instigation of the Islamic fundamentalist land grabbers. There was a renewed confidence and courage amongst the toiling masses. The students who participate in the lightning struggle against the arrest of Ali Wazir and other activists have now vowed to step up the struggle against the oppressive forces.

Comrade Ali Wazir has also been in the forefront of the struggle for the rehabilitation and attaining of the rights of the IDP’s (Internally Displaced People). Almost a million of them have been forced out of their homes in Waziristan due to this on going military operation. A large number of these are also from Ali’s electoral constituency and his Wazir tribe. They are striving very hard to get food, water, shelter, medical help and other utilities in this freezing winter in those mountains. Small children, women and the elderly are most vulnerable to the extreme climatic condition and dearth of basic need in this rugged terrain and wilderness of these tribal areas. Thus, the role of Comrade Ali in raising these demands and leading these struggles is a cause of scorn and hostility by the authorities.