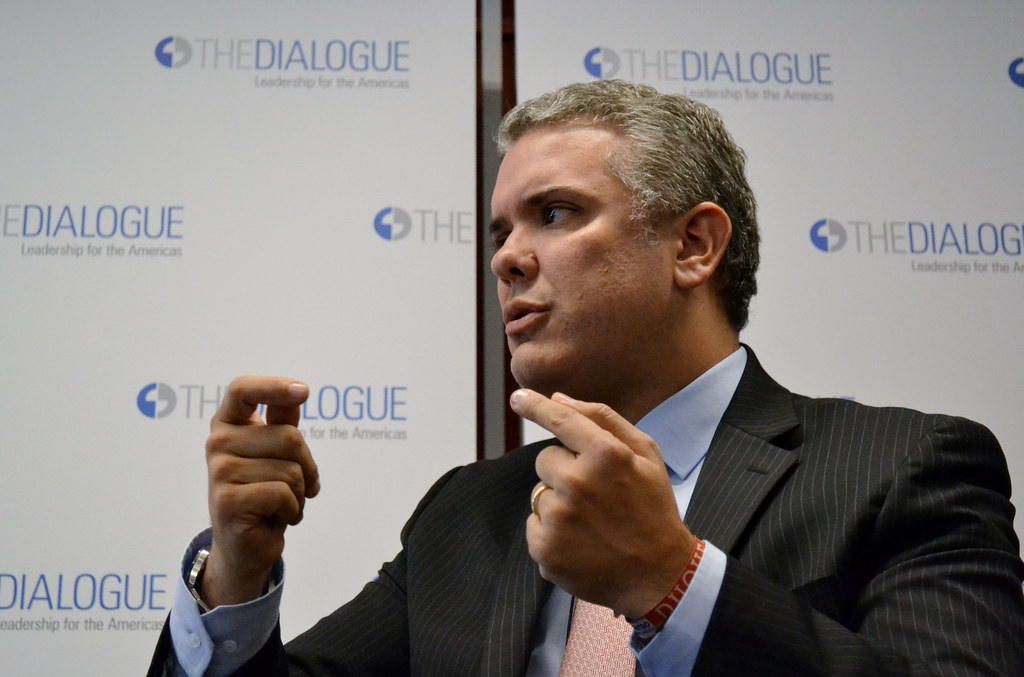 The second round of the presidential election in Colombia on 17 June delivered a victory for the right-wing, reactionary candidate, Ivan Duque (backed from behind-the-scenes by former-president, Alvaro Uribe), who received 54 percent of the vote (10m votes). However this was the first time in history that a candidate attacked by the ruling class as a dangerous “Communist”, Gustavo Petro, made it to the second round, and he received a very respectable 42 percent (8m votes).

The campaign was extremely polarised and provoked a high level of political interest amongst the population.

The immediate background to this election was the signing of a peace agreement between the Colombian state and the FARC guerrillas in 2016, a deal that was then defeated in a referendum in October that year and which was only finally signed in an amended form. The referendum showed the strength of the Colombian oligarchy, which was able to mobilise large layers of the population against the peace deal. This it did through a combination of intimidation, vote-buying, patronage, a hysterical campaign in the mass media and so on. The campaign of Ivan Duque, the candidate of the most reactionary section of the Colombian ruling class, was linked to paramilitarism and narco-trafficking, as well as the interests of the big cattle-ranchers.

The first round of the elections on 27 May saw the emergence of two clear contenders: Duque with 39 percent and Petro with 25 percent. The bad result for Vargas Llera (7 percent), the candidate backed by incumbent president Juan Manuel Santos, showed how the whole of the right wing was gathering behind Ivan Duque in order to prevent a victory for Gustavo Petro. Thus, Santos' 'enormous success' in achieving a peace deal with the FARC did not translate to the polls.

Other than the two candidates who went to the second round, the only other candidate to make it this far was the ‘centrist’ Sergio Fajardo, with 23 percent of the vote, who was the candidate of a local faction of the ruling class based in the Antioquia region (the Grupo Empresarial de Antioquia). It is worth mentioning that the Maoist MOIR supported Fajardo in the first round and then (just as scandalously) called for a blank vote in the second round.

Petro’s programme was not really left-wing in any meaningful sense of the term, but it managed to generate enthusiasm and hope amongst important layers of the workers and peasants, as well as hatred and panic amongst the ruling class. What Petro stood for was modernising Colombian capitalism, through a mild programme of agrarian reform and “diversifying” the economy away from a model based on the exploitation of mining and oil. These economic proposals (which did not go beyond the limits of capitalism) were combined with a series of democratic reforms, summarised in the idea of convening a Constituent Assembly. 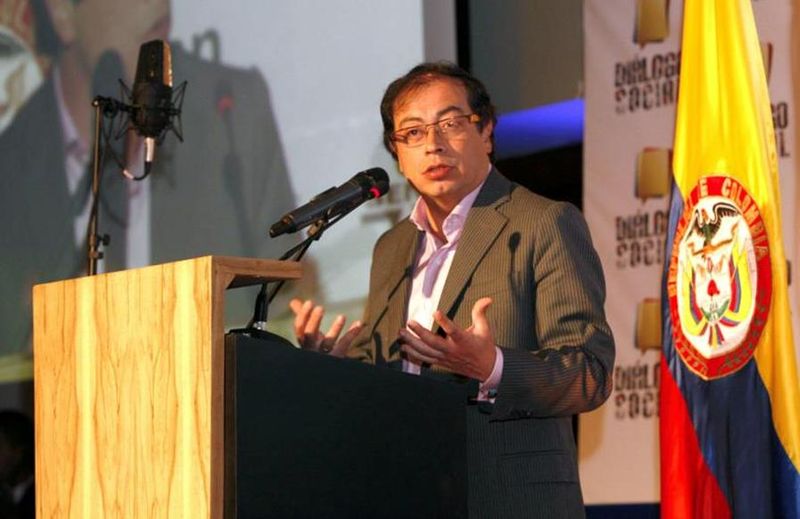 Petro’s programme was not left-wing in any meaningful sense, but it rattled the ruling class and enthused millions / Image: Coronades03

The campaign against him painted him as a dangerous radical and used all the classic themes of anti-Communist hysteria. His past membership in the M19 guerrilla organisation was used against him and a massive propaganda campaign was launched to promote the idea that he was a representative of “Castro-Chavism”, “guerrillaist violence” and that if elected he would “embark on a wave of Chavez-style expropriations”, which would sink the country into a terrible crisis “like in Venezuela”. This campaign of fear certainly had an impact.

The only way to counteract such a campaign would have been to turn the tables back on the oligarchy and explain clearly that capitalism is responsible for the poverty, violence and inequality of Colombian society and that the only way forward would be to put the enormous wealth of the country at the service of the majority.

Venezuela, of course, played an important role throughout the campaign and the ruling class made full use of the disastrous economic crisis in the neighbouring country to attack Petro. To counter this, it would have been necessary to explain that it is not socialism which has failed in Venezuela, but rather attempts to regulate capitalism.

Instead, Petro made a sharp turn to the right in the second round, by moderating his language and even abandoning some of his key promises from the first round. He actually presented his “campaign commandments” engraved in a piece of stone. The first two were “no expropriations” and “no constituent assembly”! This entered into direct contradiction with his main election promise of agrarian reform (which would involve the expropriation of landed estates from owners who refused to make them productive).

Furthermore, he distanced himself from Maduro and the Bolivarian Revolution, but not with left-wing criticism, rather by being critical from the right. 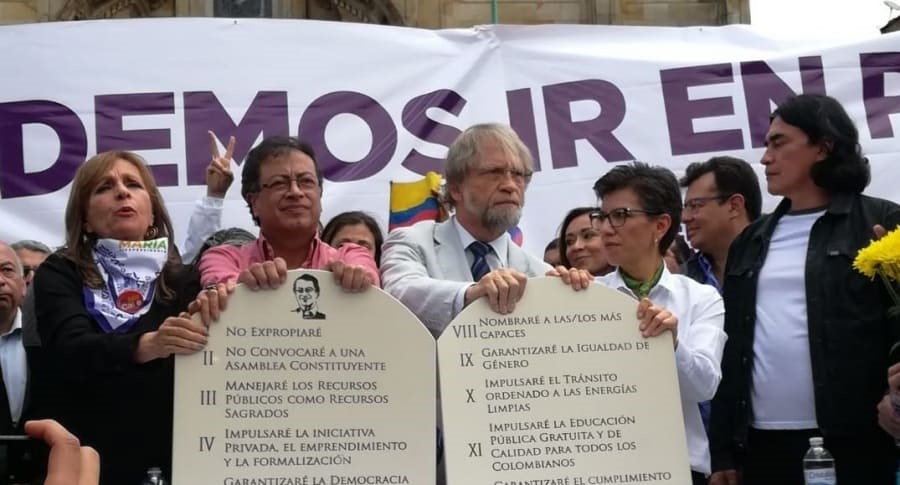 His intention was clear: to appease the ruling class and try to counter their campaign of demonisation, as well as appeal to those who had voted for Fajardo in the first round. This, of course, did not work. The only way he was able to galvanise his support in the first round was precisely because he appeared as a radical candidate who was set to deliver fundamental change. Those who wanted to vote for a 'reasonable, moderate' candidate were always going to vote for his rival Duque. He could have increased his vote by further radicalising his message and appealing to those layers of the working class, the peasants and the poor who did not participate in the election (abstention was almost 46 percent in the second round).

The campaign could be compared with that in 2006, when the Colombian ruling class put their differences to one side and backed one candidate, Uribe, for fear of allowing the “centre-left” PDA to win. The comparison reveals how different the situation is now. At that time Uribe managed to win with 62 percent of the vote in the first round on a turnout of 45 percent. The Polo Democrático y Alternativo candidate, Gaviria, barely got 22 percent. That was the time of the Plan Colombia, which meant a massive injection of money by US imperialism, and it was at the height of the conflict with the FARC. Those two factors are no longer in place.

A significant outcome for Colombia

The 8m votes for Petro are in fact very significant in the context of Colombia. They reveal how the removal of the FARC from the scene has been a positive factor from the point of view of left-wing politics. The result is also a reflection, albeit a distorted one, of the growing process of mass mobilisation that has taken place under the Santos presidency, with important movements by students, workers and peasants.

Many of those who became enthusiastic about the possibility of Petro winning will of course be disappointed. However, this is not a crushing defeat. The results were certainly the best received by any candidate regarded as “left-wing” in decades. The election result will not have a demoralising effect on the process of struggle taking place. It is likely that it will have the opposite effect, of emboldening and encouraging the movement. This will be seen as a first step, not the last.

Ivan Duque in power is certainly bad news for the working people of Colombia. Even under Santos, who was committed to the peace process, there was a string of assassinations of social leaders (peasants, human rights defenders, trade unionists), including many former guerrillas, in a clear breach of the agreements. This will be intensified. Duque, an opponent of the accords, campaigned on the basis of amending certain aspects of them, but not completely tearing them up. Nevertheless, he will certainly carry out a policy of attacks on the workers and peasants, cuts in public spending and continued impunity for the state and the paramilitary gangs.

Having seen the path towards fundamental change blocked on the electoral field, the workers, peasants and youth will now have no other alternative than confronting these policies on the streets through mass mobilisation and strikes.

No future under capitalism

A key task is to make a serious balance-sheet of Petro’s campaign and his programme. Here is a politician whose stated aim was to modernise Colombian capitalism, not to overthrow it. And still, his programme created panic amongst the ruling class and provoked an hysterical ‘anti-Communist’ reaction.

One conclusion must be drawn: it is not possible to modernise Colombia under capitalism. The only way to carry out the pending democratic-national tasks (including agrarian reform) is by revolutionary means and by linking them with the socialist tasks of expropriating the rotten and vicious Colombian oligarchy, whose hands are soaked with blood. At the same time, the perspective of revolution in Colombia is intimately linked to the revolutionary process in the whole of Latin America.

The task of gathering the initial forces of a revolutionary Marxist tendency based on this perspective of permanent revolution, is today more urgent than ever.