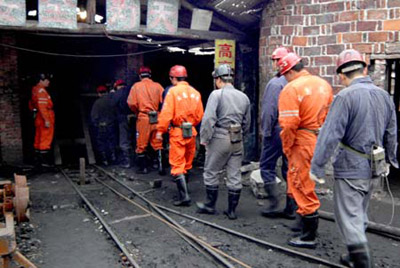 In August a strike broke out in the Hunan Coal Industry Group against demands the bosses were posing as part of the preparations for privatisation of the mines.

Several thousand mineworkers at the Hunan Coal Industry Group went on strike on August 22 in protest against privatisation plans. The movement started after the victorious struggles against privatisaton by the steelworkers in Jilin in July and Henan in August.

The mines belong to the state-owned Jinzhushan Mining Industry of Hunan Coal Group (Xiang Mei Ji Tuan, XMJT), which proposed the privatisation of the mines in preparation for its listing on the stock exchange. As part of the process the company demanded that workers sign new contracts giving up the legally required compensation of one month’s pay for each of their previous years of work.

The method used by the management of this State Owned Company was particularly callous. It seems that the managers at Tuoshan mine, the first one to carry out the plan, had printed “pre-signed” contracts for their workers. At the beginning of the different shifts, workers were asked to fingerprint the contract, which they had not even read. If the miners refused, they would not be allowed back to work, they were told.

Taken by surprise, at first many miners signed the new contract (giving away rights they had acquired over many years of work, some for as many as 30 years). But then, as they realised what was happening, they refused to sign and warned their workmates at another four mines, who immediately refused to sign and walked out on strike. Up to 5,000 miners participated in the action and blockaded several mines.

This time the Chinese authorities were anxious not to allow reports of this latest strike. The workers contacted several TV stations and newspapers, but none of them were prepared to carry their story.

Furthermore, the miners reported that management had recruited armed thugs, at 200 yuan per person per day, to form a “mine protection corps” with the aim of forcibly breaking the strike. The regional authorities ordered the company to disband this “corps” but threatened the strikers that their action was illegal and if they did not desist they would be arrested. According to the China Labour Bulleting, the authorities were probably trying to prevent the riots that followed the use of private security guards against a miners’ strike at another state-owned mine in Hunan two years earlier.

The South China Morning Post, quoting He Yiming, a 37-year-old coal miner who has worked for the company for over 10 years, reported that the authorities had confronted the strikers.“They said if we did not get back to work immediately, they might start detaining strike leaders,” he explained.

As of September 2nd, no more news about the strike movement became available. Clearly the regime fears the spreading of news about such struggles. Workers in many other parts of China are facing similar problems and the eruption of one struggle in one area can very easily affect workers in other parts of the country.

As we have explained in previous articles, the rapid economic development of China has created an enormous proletariat, and now it is beginning to flex its muscles.