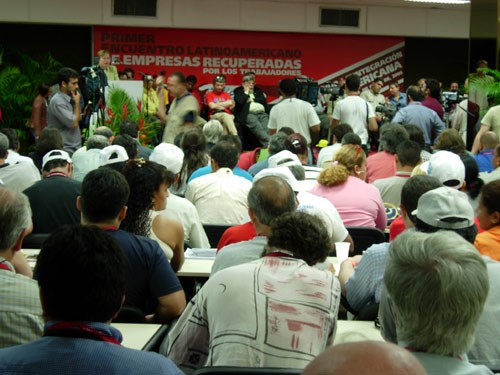 Workers’ management and democratic planning of the economy

The expropriation of Venepal at the beginning of 2005, and its reopening under workers’ cogestión, was an important turning point in the Bolivarian Revolution. The struggle of the workers of Venepal for nationalisation under workers’ control was met with a positive response by the government of Chavez. For the first time legal approval was given to the slogan the workers used in the struggle against the bosses lockout and attempted coup of December 2002: “factory closed, factory occupied”.

The expropriation of Venepal, now Invepal, was followed by that of the Constructora Nacional de Válvulas, now Inveval, and more recently of the Promabasa silos, the Heinz tomato plant, the Cumanacoa sugar mill and others that are being discussed. This, together with the announcement of president Hugo Chavez in July, of a list of 2,700 paralysed and semi-paralysed companies, with the idea that they should be reopened, has encouraged the struggle of the workers and opened an important discussion in the Venezuelan labour movement.

This debate also involves the application of workers’ cogestión and workers’ participation. The experience of [aluminium smelter] ALCASA demonstrates the superiority of workers’ control over the bureaucratic capitalist management of state-owned companies. However, in [state-owned electricity company] CADAFE the workers are faced with the resistance of the managers who attempt to prevent the participation of the workers in decision-making.

The Revolutionary Marxist Current wants to contribute to this debate with the following points:

The debate opened within the Bolivarian Revolution on workers’ management, factory occupations and socialism of the 21st century, is a debate that goes beyond the borders of Venezuela. The working class of other countries watches with interest this debate and the Venezuelan workers can also learn from the experiences of workers of other countries. The only trustworthy allies of the Venezuelan working class and poor people are the workers and peasants of other countries. Our enemy is the same: capitalism, imperialism and the oligarchy. Our struggle is the same. If the capitalist system is a worldwide system of imperialist domination, the struggle of the workers for socialism can only be international. For this reason the Revolutionary Marxist Current is part of the International Marxist Tendency. In our view the ideas of scientific socialism, of Marxism, are the only ones that can bring the working class to victory.