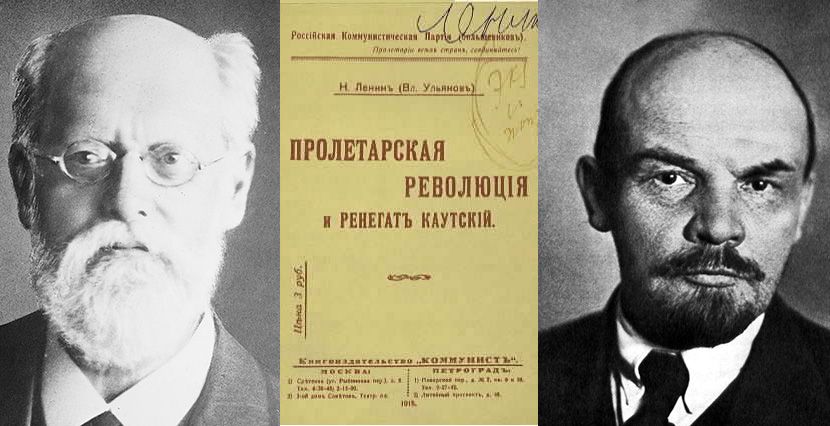 Kautsky’s pamphlet, The Dictatorship of the Proletariat, recently published in Vienna (Wien, 1918, Ignaz Brand, pp. 63) is a most lucid example of that utter and ignominious bankruptcy of the Second International about which all honest socialists in all countries have been talking for a long time. The proletarian revolution is now becoming a practical issue in a number of countries, and an examination of Kautsky’s renegade sophistries and his complete renunciation of Marxism is therefore essential.

First of all, it should be emphasised, however, that the present author has, from the very beginning of the war, repeatedly pointed to Kautsky’s rupture with Marxism. A number of articles published between 1914 and 1916 in Sotsial-Demokrat and Kommunist, issued abroad, dealt with this subject. These articles were afterwards collected and published by the Petrograd Soviet under the title Against the Stream, by G. Zinoviev and N. Lenin (Petrograd, 1918, pp. 550). In a pamphlet published in Geneva in 1915 and translated at the same time into German and French[2] I wrote about “Kautskyism” as follows:

“Kautsky, the leading authority in the Second International, is a most typical and striking example of how a verbal recognition of Marxism has led in practice to its conversion into ‘Struvism’, or into ‘Brentanoism’ [i.e., into a bourgeois-liberal theory recognising the non-revolutionary “class” struggle of the proletariat, which was expressed most clearly by Struve, the Russian writer, and Brentano, the German economist]. Another example is Plekhanov. By means of patent sophistry, Marxism is stripped of its revolutionary living spirit; everything is recognised in Marxism except the revolutionary methods of struggle, the propaganda and preparation of those methods, and the education of the masses in this direction. Kautsky reconciles in an unprincipled way the fundamental idea of social-chauvinism, recognition of defence of the fatherland in the present war, with a diplomatic sham concession to the Lefts—his abstention from voting for war credits, his verbal claim to be in the opposition, etc. Kautsky, who in 1909 wrote a book on the approaching epoch of revolutions and on the connection between war and revolution, Kautsky, who in 1912 signed the Basle Manifesto on taking revolutionary advantage of the impending war, is outdoing himself in justifying and embellishing social-chauvinism and, like Plekhanov, joins the bourgeoisie in ridiculing any thought of revolution and all steps towards the immediate revolutionary struggle.

“The working class cannot play its world-revolutionary role unless it wages a ruthless struggle against this backsliding, spinelessness, subservience to opportunism, and unparalleled vulgarisation of the theories of Marxism. Kautskyism is not fortuitous; it is the social product of the contradictions within the Second International, a blend of loyalty to Marxism in word and subordination to opportunism in deed” (G. Zinoviev and N. Lenin, Socialism and War, Geneva, 1915, pp. 13–14).

Again, in my book Imperialism, the Latest Stage of Capitalism,[This was the original title of Lenin’s Imperialism, the Highest Stage of Capitalism.] written in 1916 and published in Petrograd in 1917, I examined in detail the theoretical fallacy of all Kautsky’s arguments about imperialism. I quoted Kautsky’s definition of imperialism: “Imperialism is a product of highly developed industrial capitalism. It consists in the striving of every industrial capitalist nation to bring under its control or to annex all large areas of agrarian [Kautsky’s italics] territory, irrespective of what nations inhabit it.” I showed how utterly incorrect this definition was, and how it was “adapted” to the glossing over of the most profound contradictions of imperialism, and then to reconciliation with opportunism. I gave my own definition of imperialism: “Imperialism is capitalism at that stage of development at which the dominance of monopolies and finance capital is established; at which the export of capital has acquired pronounced importance; at which the division of the world among the international trusts has begun; at which the division of all territories of the globe among the biggest capitalist powers has been completed.” I showed that Kautsky’s critique of imperialism is on an even lower plane than the bourgeois, philistine critique.

Finally, in August and September 1917—that is, before the proletarian revolution in Russia (October 25 [November 7], 1917), I wrote a pamphlet (published in Petrograd at the beginning of 1918) entitled The State and Revolution. The Marxist Theory of the State and the Tasks of the Proletariat in the Revolution. In Chapter VI of this book, entitled “The Vulgarisation of Marxism by the Opportunists”, I devoted special attention to Kautsky, showing that he had completely distorted Marx’s ideas, tailoring them to suit opportunism, and that he had “repudiated the revolution in deeds, while accepting it in words.”

In substance, the chief theoretical mistake Kautsky makes in his pamphlet on the dictatorship of the proletariat lies in those opportunist distortions of Marx’s ideas on the state—the distortions which I exposed in detail in my pamphlet, The State and Revolution.

These preliminary remarks were necessary for they show that I openly accused Kautsky of being a renegade long before the Bolsheviks assumed state power and were condemned by him on that account.

[1] Lenin began work on the book The Proletarian Revolution and the Renegade Kautsky at the beginning of October 1918, immediately after he had read Kautsky’s The Dictatorship of the Proletariat, which distorted and vulgarised the Marxist theory of the proletarian revolution and slandered the Soviet state.

Lenin attached great importance to exposure of Kautsky’s opportunist views on the socialist revolution and the dictatorship of the proletariat. In August 1918 the magazine Sozialistische Auslandspotilih carried Kautsky’s article in which he called upon the Social-Democratic parties to fight the Bolsheviks. After reading excerpts from the article published in Pravda on September 20, Lenin wrote to V. V. Vorovsky in Stockholm: “The disgraceful nonsense, childish twaddle and most vulgar opportunism of Kautsky warrant the question: Why are we doing nothing to combat Kautsky’s theoretical vulgarisation of Marxism?” (Collected Works, Vol. 35).

Lenin asked Vorovsky, the then plenipotentiary envoy of the Soviet Republic in the Scandinavian countries, to send him Kautsky’s pamphlet on the dictatorship as soon as it was out and also all his articles about the Bolsheviks.

Bonch-Bruyevich wrote in his reminiscences that Lenin was carried away by his work on The Proletarian Revolution and the Renegade Kautsky, “he was literally burning with anger”, “sitting up every day till late at night writing this remarkably hard hitting work. . . .” On October 9, before the book’s completion Lenin wrote an article under the same title, which appeared in Pravda on October 11. On October 10 he sent a note to People’s Commissar for Foreign Affairs U. V. Chicherin and his deputy L. M. Karakhan asking them to forward his article to A. A. Joffe, Y. A. Berzin and V. V. Vorovsky in Berlin. In the accompanying letter he wrote: “Dear comrades, I realise only too well the defects of this very short article against Kautsky. But it is essential to make a stand as quickly as possible and express an opinion. Please see that it is translated and published in leaflet form” (Lenin Miscellany XXXVI, pp. 61–62). The German translation of Lenin’s article was published in Berne in 1918 and in Vienna in 1919. In 1919 it was also published in Milan in Italian.

In 1919 Lenin’s pamphlet The Proletarian Revolution and the Renegade Kautsky was published in Britain, France and Germany.

[2] Reference is to the pamphlet Socialism and War (The Attitude of the R.S.D.L.P. Towards the War). Lenin decided to write it in connection with the First International Socialist Conference that was about to be convened. He wrote it together with Zinoviev, but the main part of the pamphlet belongs to Lenin who also edited it.

The pamphlet was published in Russian and German and circulated among the delegates at the Zimmerwald Conference which met in September 1915. After the Conference it was also published in France, and in Norway in the Left Social-Democratic newspaper. Lenin more than once tried, though without success, to get it published in America in English.