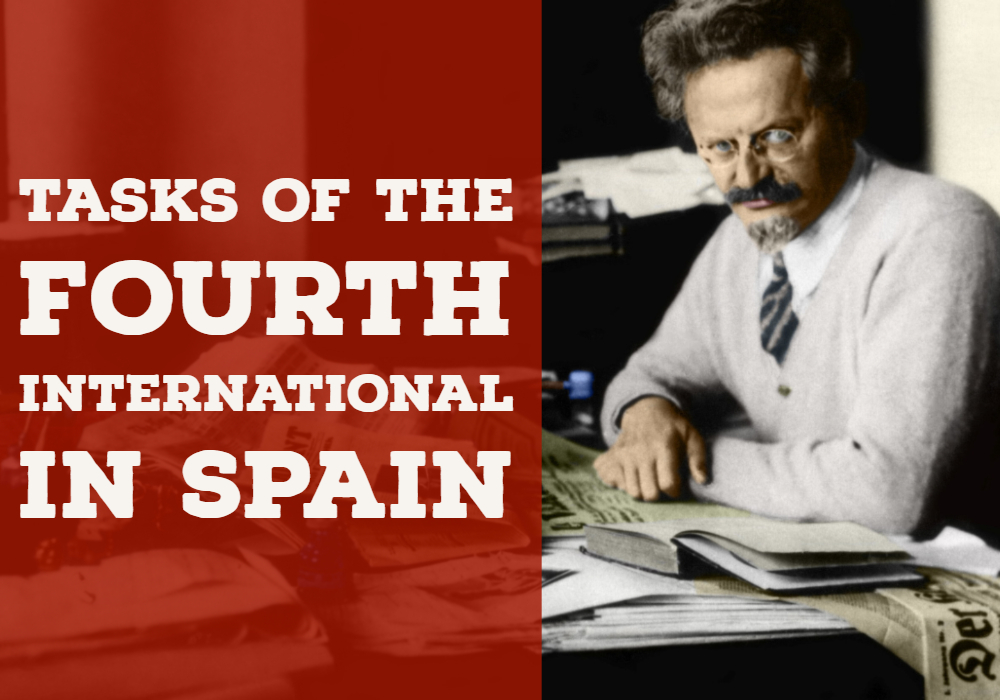 A letter to a Spanish comrade.

The situation in Spain has again become revolutionary.

The development of the Spanish revolution is taking place at a slow tempo. For this reason, the revolutionary elements have acquired a fairly long period of time in which to take shape, to rally the vanguard around themselves, in order to measure up to their task at the decisive moment. We must now say openly that the Spanish "Left Communists" have allowed this exceptionally favorable interval to slip by, and have revealed themselves to be in no way better than the Socialist and "Communist" traitors. Not that there was any lack of warning. All the greater therefore is the guilt of Andrés Nin, Juan Andrade, and the others. With a correct policy, the "Left Communists" as a section of the Fourth International might have been at the head of the Spanish proletariat today. Instead, they are vegetating in the confused organization of Maurín—without a program, without perspectives, and without any political significance. Marxist action in Spain can begin only by means of an irreconcible condemnation of the whole policy of Andrés Nin and Andrade, which was and remains not only false but also criminal.

What does the removal of President Zamora mean? It means that political developments have once more entered into an acute stage. Zamora was, so to speak, the stable pole of the ruling echelons. Under different conditions, he played the same role that Hindenburg played in Germany for a certain period of time, that is, during the time when the reaction (even the Nazis) on one side, and the Social Democracy on the other placed their hopes in him.

Modern Bonapartism is the expression of the most extreme class antagonisms in the period when these antagonisms have not yet led to open struggle. Bonapartism may find its point of support in the quasi-parliamentary government, but also for that matter in the "supraparty" president; this depends exclusively on the circumstances. Zamora was the representative of the Bonapartist equilibrium. The sharpening of the antagonism led to a state of affairs in which both of the main camps sought first to use Zamora and then to get rid of him. The right wing did not succeed in doing this in its time, but the "Popular Front" did. This means however an acute revolutionary period.

Both the profound ferment in the masses and the continual violent explosions demonstrate that the workers of town and country, as well as the poor peasants, deceived over and over again, are continually directing all their forces toward a revolutionary solution. And what role does the Popular Front play in the face of this powerful movement? The role of a gigantic brake, built and set into motion by traitors and servile scum. And only yesterday Juan Andrade signed the thoroughly despicable program of this Popular Front!

After Zamora's removal, Azaña, hand in hand with the new president of the republic, must take over the role of the stable Bonapartist pole; that is, he must try to elevate himself above the two camps in order to be better able to direct the arms of the state against those revolutionary masses who assisted him to power. The workers' organizations, however, remain completely enmeshed in the net of the Popular Front. The convulsions of the revolutionary masses (without a program, without a leadership worthy of confidence) thus threaten to throw the gates wide open to the counterrevolutionary dictatorship!

That the workers are driving ahead in a revolutionary direction is shown by the development of all their organizations, most particularly by that of the Socialist Party and the Socialist Youth. Two years ago we raised the question of the entry of the Spanish Bolshevik-Leninists into the Socialist Party. This proposal was rejected by the Andrés Nins and Andrades with the disdain of conservative philistines: they wanted "independence" at all costs, because it left them in peace and put them under no obligations. And yet, affiliation to the Socialist Party in Spain would have yielded immeasurably better results under the given circumstances than was the case, for example, in France (on the condition, of course, that in Spain the terrible mistakes committed by the leading French comrades had been averted). Meanwhile, however, Andrade and Nin united with the confusionist Maurín, in order jointly to trot along behind the Popular Front.[1] The Socialist workers, however, in their striving for revolutionary clarity, fell victim to the Stalinist deceivers. The fusion of the two youth organizations [Socialist and Stalinist] signifies that the best revolutionary energies will be abused and dissipated by the Comintern's mercenaries. And the "great" revolutionists, Andrés Nin and Andrade, remain on the sidelines in order to carry on, together with Maurín, completely impotent propaganda for the "democratic socialist" revolution, that is, for a social democratic betrayal.[2]

Nobody can know what form the next period in Spain will take. In any case, the upsurge that has borne the clique of the Popular Front to power is too mighty to ebb in a short period of time and to leave the battlefield free to the reaction. The truly revolutionary elements still have a certain period of time, not too long, to be sure, in which to take stock of themselves, gather their forces, and prepare for the future. This refers above all to the Spanish supporters of the Fourth International. Their tasks are as clear as day:

1. To condemn and denounce mercilessly before the masses the policy of all the leaders participating in the Popular Front.

2. To grasp in full the wretchedness of the leadership of the "Workers Party of Marxist Unification" and especially of the former "Left Communists"—Andrés Nin, Andrade, etc.—and to portray them clearly before the eyes of all the advanced workers.

3. To rally around the banner of the Fourth International on the basis of the "Open Letter."

4. To join the Socialist Party and the United Youth in order to work there as a faction in the spirit of Bolshevism.

7. To be present in every struggle so as to give it clear expression.

8. To insist always on having the fighting masses form and constantly expand their committees of action (juntas, soviets), elected ad hoc.

9. To counterpose the program of the conquest of power, the dictatorship of the proletariat, and the social revolution to all hybrid programs (a la Caballero, or à la Maurín).

This is the real road of the proletarian revolution. There is no other.

[1] The "turn" of La Batalla toward the Popular Front does not inspire confidence. One cannot say on Monday that the League of Nations is a band of brigands; on Tuesday urge voters to vote for the program of the League of Nations; on Wednesday explain that yesterday it was only a question of electoral action, and that today one has to resume one's own program. The serious worker must ask: and what are these people going to say on Thursday and Friday? Maurín appears to be the very incarnation of a petty-bourgeois revolutionist: superficial, agile, and versatile. He studies nothing, he understands little, and he spreads confusion all around him.—L. T.