Share
Tweet
Earlier this year a Spanish comrade visited the occupied factories in Brazil and wrote this report. This was before 150 armed police raided the factory on orders of a judge. This report gives you a taste of what the CIPLA workers had achieved. We must not allow all this to be destroyed. Please take part in the international solidarity campaign and raise this issue wherever you can in the labour movement.

"Every strike with occupations practically poses the question of who owns the factory; the capitalist or the workers" (Leon Trotsky) 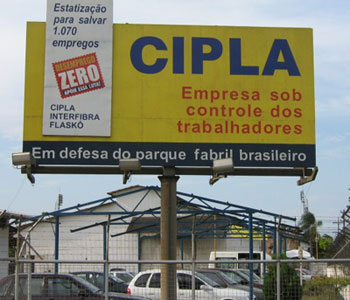 As in every revolution, the question of power, about who really rules the house, was posed in Cipla and Interfibras by the November 2002 strike; wages in arrears, debts with the State (10 years without contributing to the Social Security system) and lack of investments while production continued and orders kept coming in as normal led to the strike. During all this, after a struggle that mobilised the whole of the working class in Joinville against the government's lack of initiative and the attacks from the police and the judges, the workers occupied the factories and started up production again, making enormous sacrifices.

The trade unions' initial position did not help either. Their position was to close the factories and later open them up again as co-operatives and to take on responsibility for the owner's debts. As Castro, a leading member of the Strike Committee, recalls "that would have meant the end. You could not pay off a debt like that ($180millions) even if you were to live three lives". Only the pressure from the workers won union support for the strike.

Dominguinhos, a veteran welder with more than 30 years at Interfibra, explains to a group of students from Sao Paulo touring the factories: "It is the most beautiful experience I have had in my life. Workers decide in assembly on all important questions. For the everyday running of the factory there is a Factory Committee and Finance and Administrative Council (CFA), which are answerable and recallable by the Assembly." "Workers' democracy - adds Castro - is the most perfect form of democracy".

The most basic achievements of this new system are quickly noticed by the visitor when walking into Cipla: order and cleanliness, where those who have no confidence in the working class would expect the most absolute chaos. 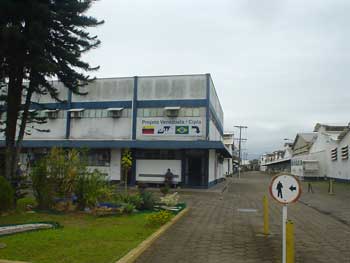 The taking over of the factory was carried out by ordinary workers, who are still working there, such as the cleaners who proudly explained to us that before the occupation nobody noticed their presence and their salaries were well below the minimum in the factory; now they feel they are a recognised and important part of the workforce, with wages equal to the workers on the production line.

In these factories there are certain feelings that will not go away: workers who are proud of the work they are doing with the idea that only through united struggle the can workers achieve anything.

After the occupation the creativity of the workers was set in motion; they recovered the machines and whole lines of production that had been abandoned years ago. Sixteen tonnes of junk were removed from the site and thousands of barrels containing chemical waste have been taken away to be treated ("it will take some time to clean up everything" explains Antonio). The workers have also rendered automatic and improved a great deal of machinery and implemented an energy efficient programme that has slashed by half their energy consumption between December and April.

One of the last steps taken in Cipla is the reduction of the working week to 30 hours. The working week has been reduced, but the wages have been kept at the same level. Now the factory is operated on 4 shifts of 6 hours each between Monday and Friday and a further 41 new workers have been hired with the same rights. Francisco Lessa, a CFA member, tells us about how positive the first 90 days of this new working week have been; productivity has increased and it has been decided to prolong it for a further 90 days.

Given the lack of support from the union on the one hand and on the other the interest generated by this measure among the workers in other companies operating in the same sector, a group of workers from the occupied factories has launched an alternative candidature for the Plastics Union of Joinville. Osvaldo, from the CUT, showed us a leaflet from the group. Its title is a clear declaration of principles: "The Union is for Struggle".

In collaboration with the Venezuelan government, Cipla has developed a council house project to tackle the problem of housing in Venezuela. The first factory, being built in Venezuela, is practically ready and, in exchange, Venezuela supplies the raw material to keep producing.

As has already been reported, last December in Joinville there was a Latin American Gathering of Occupied Factories. Eni, Secretary of the Legal Department of Cipla, participated in the organisation of that gathering and recalls the huge impact of being with so many delegates from different countries: "The support we got was huge, because we cannot forget that all our machinery is at risk of being seized by the courts".

We had a brief meeting with Serge Goulart, co-ordinator of the Occupied Factories Movement, who was about to leave to visit and offer his experience and advice to other factories in the struggle. He explained to us that at the top of the list of demands of the workers is the nationalisation of the factory under workers' control. Since the government is the main creditor, the factories should be nationalised. Besides, as F. Lessa explained later to the workers of TMT - a factory threatened with immediate closure - the Cipla' production would help to put together a massive house building programme, while Interfibras is fundamental to the oil industry. Before leaving, Serge Goulart asked us to convey the solidarity of the Occupied Factories Movement to the workers of Delphi in Spain.

The situation in Interfibras is more complicated. Affected by a much lower level of investment, the technological level here is very low and most of the work is done manually, as the person responsible for quality control explained to us. He admitted to having some doubts about the viability of nationalisation, but added that, "We receive a lot of support from Cipla, also in administrative and legal questions. We could not keep our struggle going if we were isolated."

It is impossible to leave Joinville without the firm conviction that the struggle of these 1000 workers will eventually triumph. Antonio introduces us to Donha Odete. "Here you have a revolutionary militant", he says, and Donha Odete, while holding in her hand a piece of work recently finished, smiles with the complicity of someone who knows they are involved in a wider struggle.