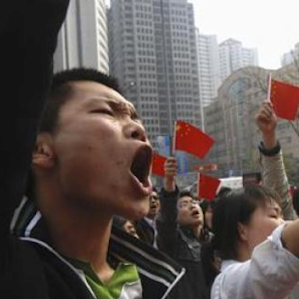 The crisis of capitalism in the West has taken centre stage, with the spectacle of Donald Trump's election, and Brexit. China has dropped out of the limelight, for the time being retaining a degree of stability. This at least is the message the party leadership would like to present.

Premier Li Ke Qiang recently wrote in Bloomberg Buisnessworld, "In a world with a plethora of uncertainties, China offers an anchor of stability and growth with its consistent message of support for reform, openness and free trade".

Li Ke Qiang's words, however, are bitterly ironic to the ears of many, with the lives of Chinese workers bearing little resemblance to the messages issued by party leaders and the media. Ordinary Chinese see neither the stability nor growth Premier Li references. The capitalist class certainly has though, subjecting the Chinese working class to horrendous conditions, while they make huge profits. During my time in China, I had the opportunity to witness the lives of Chinese workers and the injustices they face on a daily basis.

In China, the contrast between rich and poor is stark and visible for everyone to see. Infrastructure is varied, corresponding to where you live, and how much your rent costs. The very poorest live in shocking conditions. Near my old workplace, there was as collection of grey concrete huts on the outskirts of the city, making up a small makeshift village. It was often migrant labourers, or those fresh from the countryside who took up residence in these areas. These buildings often had doors or a makeshift curtain, lacking window frames. More often than not there were no decorations, with just the bare necessities for furniture.

This village was later completely demolished. Clearly those who had lived there were an inconvenience, with no care given to what happened to them. I saw this happen more than once in areas such as this. Less than 150 metres away from this village was an Olympic stadium, which surely had several million Yuan invested in it, a bitter and stark reflection of the so-called “socialist market economy”.

Cityscapes are filled with huge high rises and apartment blocks.  There are massive neighbourhoods which are the homes of thousands of workers and their families. Apartment blocks for the average worker are bleak, dingy, and depressing environments to live in, seeming more like the entrance to a prison, than somebody's home.

The conditions inside the apartments naturally vary, depending on the landlord or an individual's salary. I recall one worker's apartment, a shop assistant, who shared a rented apartment with a teacher. The entire apartment was in a state of disrepair and dilapidation. Surfaces inside the kitchen were worn out. The floor was dirty and crumbling. With rusting chairs and kitchen utensils, anything metal was rusting or beginning to rust throughout his apartment. The living room was in a similar state. They didn't have enough to money to maintain upkeep. Clearly the landlord didn't care either, all he was interested in was that the rent was paid and his pocket lined.

Another individual living nearby my workplace, a security guard, shared both her workplace and home. Her and her family lived inside a small building with a total of one room and a storage cupboard to house a family of four. They slept, ate and lived daily inside this room. These are not isolated examples, but reflections of the conditions facing the Chinese working class all across China. Meanwhile, the wealthy live in apartment blocks where conditions are a world apart.

Seeing an individual in complete poverty is not difficult in China. Homelessness is commonplace. Often somebody who is homeless has ended up so due to a medical condition or a physical deformity. Chinese citizens are not provided with any free healthcare, instead they have to rely on insurance programs. However, such programs usually only cover about half of medical costs or less, depending on the treatment required. Those who cannot afford to be treated are left hopeless.

I remember seeing a man dragging himself down the street on a trolley, due to his missing legs, begging for money, and another individual slumped in the street, bedraggled, with disease ridden feet. Prior to the capitalist reforms, the old Stalinist planned economy at least provided public healthcare, where individuals likely would not have been left in such a horrendous state. While the poor and working class suffer, multinational health companies have made a killing from these “reforms”.

Inside the workplace, the situation is no different. Long hours, low wages and little holiday are the norm. Where I lived, the average supermarket worker earned just 1500 Yuan per month, usually working 6-7 days per week. Overtime is often demanded by the bosses, of course unpaid. In my work place, co-workers were often left working much longer than were asked of them. I recall one of my co-workers informing me about her salary, complaining she had not received her October salary. It was mid-November at the time. Workers are often left at the mercy of the bosses and employers

China does in fact have a “trade union”, the All-China Federation of Trade Unions, but it is one that is officially sanctioned and controlled by the Communist Party. The union chair is an individual selected by the bosses and obedient to what they want. Therefore, they do very little/nothing to represent or protect workers in the workplace. This suits the capitalists very nicely, providing an environment of maximum exploitation so as to ensure maximum profit.

However, the Chinese working class, despite the threat of state oppression, has not been idly accepting this state of affairs. These conditions are unbearable for many, and some are looking to challenge the powers that be. In recent years, the working class has begun to move, and with success. The capitalist class is beginning to face a working class increasingly aware of its rights and conscious of its interests.

In Guangdong, 27 street sweeps have been fighting against local authorities since 2014, after not being paid for over two years, filing repeated lawsuits. The courts, of course, ruled in favour of the bosses, stating “the workers couldn’t prove that they had been employed by the defendant”. Yet they still stand defiant, attempting to raise awareness of their struggle. Last year saw Walmart workers in Shenzhen fight back against the imposition a new working hours system, amounting to a pay cut. In July, there were strikes at three stores in central China, after 10,000 workers had joined the online Walmart Workers' Network. These are just examples of a growing trend in strikes and workers fighting back against the bosses over the past few years.

The struggle of Chinese workers currently is for basic rights; the right to unionise, and collective bargaining. However, the capitalists are not prepared to give an inch. In the current conditions of capitalist crisis, they cannot afford any concessions either. The monolithic Communist Party long ago ceased to be Communist, even in words. It is now a tool for the rule of the bourgeoisie, a useful instrument in their rule over society.