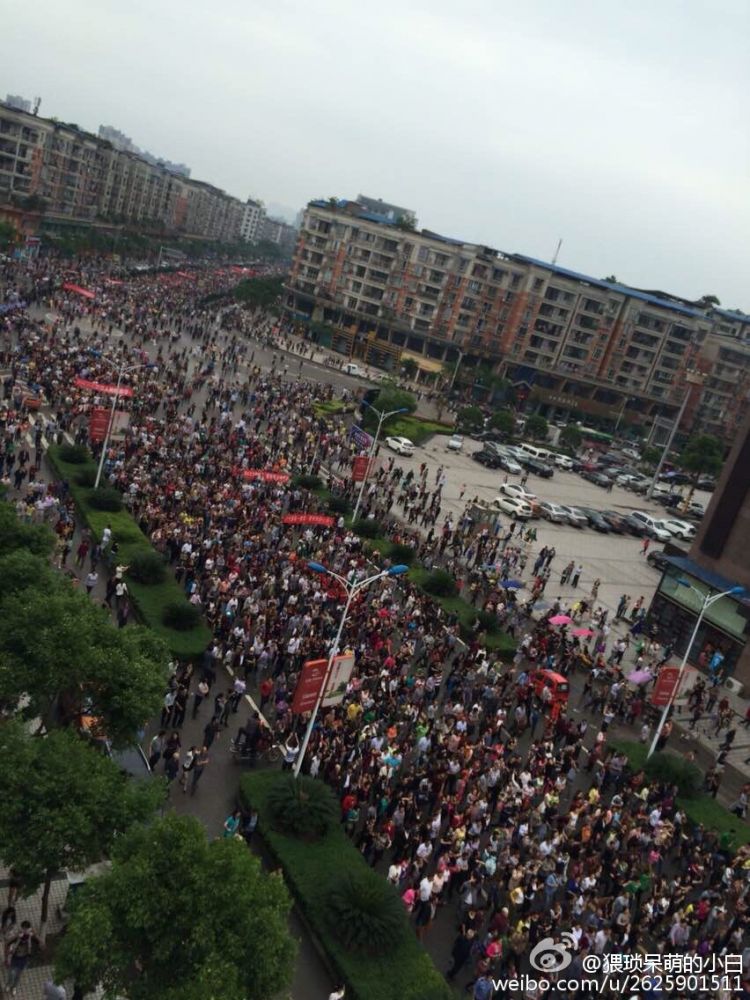 Thousands of protesters violently clashed with authorities last Saturday in Linshui County, located in eastern Sichuan province. The protesters demanded that a proposed high speed railway pass through Linshui. They were met with batons and rubber bullets, with hundreds reportedly being injured by the police and tactical units. The heavy handed response of the Chinese state to these protests reveals the instability and weakness of the regime.

Residents of Linshui were originally told that a new railway would pass through their county. They were angered when news broke that the line would in fact pass through the neighbouring city Guangan, the birthplace of Deng Xiaoping and the region’s administrative centre. The protest was unusual in its support for a development project. Usually, protests in China are against the dizzying amount of new projects (often seen as damaging to the local community) that the government has embarked on in order to keep the economy afloat.

Around 20,000 protesters took to the streets of Linshui in support of the rail line. A letter written by a resident of Linshui addressed to the state authorities stated, “There are two railways passing through Guangan. We are the only county in the region that has nothing.” The 12,000 kilometres of high speed rail that the government has built over the last seven years has often brought much needed investment and tourism to the areas the lines pass through. Although the scale of the development projects since 2008 has been huge, the development has been uneven, with many communities being left behind. It is for these reasons that residents of Linshui so desperately want high speed rail.

The demonstration was peaceful at first, but soon the police began beating protesters over the head with batons at random. This provoked a violent resistance from the protesters, which lasted well into the night. There were accounts of burning police cars, and protesters throwing rocks at the tactical police units. There are also unconfirmed reports that several protesters have died.

This militant outburst of resistance is an expression of the underlying mood in China today. Another similar case of this took place in Guangdong province last month when a protest against the construction of an incinerator turned violent in response to the extreme aggressiveness of the police.

These explosive outbursts on a local level are happening in the context of rising workers’ militancy. China has seen a rising level of strikes recently. According to the data collected by China Labour Bulletin, there were at least 1,378 workers’ strikes and protests in 2014, more than double the 2013 figure (656) and and three times that of 2012 (382). There was a dramatic upturn in the last quarter of 2014, with 569 strikes recorded, an acceleration on previous quarters and almost four times the number in the same period of 2013.

With the boom in China slowing down, more and more workers are being pushed into struggle, fighting for their wages, benefits, and pensions. Although China largely avoided the crash of 2008 through a huge Keynesian stimulus policy of massive infrastructure projects, this only put a band-aid on the crisis. Now, a crisis of overproduction is coming to the fore. In 2014, China saw its lowest growth since 1990, while productive capacity utilization is down to 70%. According to official estimations, the Chinese economy needs to grow by 7.2% each year to ensure the 10 million new workers entering the market each year have a job. This is proving to be an impossibility, paving the way for further unrest. As the world economy continues to slow, China will only see further problems as exports decrease.

Even during the boom in China, many were disappointed and angered as the prosperity disproportionately benefited the elite. Ordinary Chinese people saw the hypocrisy of so called communist politicians driving Bentleys through the streets. The bureaucrats very rarely consulted the communities in which the development projects took place, leading to many protests.

The corruption that surrounds these development projects goes right to the top of China’s political caste. The former Railway minister, Liu Zhijun, took over 100 million dollars in bribes, and is now serving time in prison. It is quite possible that it was the bribes that led to the change in the plans to the detriment of Linshui.

All of this corruption and privilege amongst government officials is exposing the absolute rottenness of the regime in the eyes of workers and youth. Combine this with the downturn in the economy and you have a recipe for mass unrest in China. The protests in Linshui are an expression of this, where thousands actively and violently rebelled against the state.

The establishment is very much aware of this unstable situation, and is also aware that it will not be able to grant significant concessions to the working class in this epoch of capitalist crisis. This is why the recent protests in China have been met with such aggressive repression. State repression does not demonstrate the strength of Chinese capitalism, but its weakness. The same phenomena can be seen across the capitalist world, where governments in crisis are attacking democratic rights and are increasingly relying on the “armed bodies of men” to keep mass movements at bay.

Another example of this state repression was in April of 2014, during the strike at Yue Yuen, a Chinese shoe manufacturer. More than 40,000 workers went out on strike over a pension and benefits dispute, making the Yue Yuen strike the largest in recent Chinese history. The response of the ruling class was immediate repression. Police beat workers up and went into factories with police dogs demanding that everyone go back to work.

The residents of Linshui desire economic prosperity and they are going to be disappointed with the next period. The same mood of militancy that was seen in Linshui will eventually be expressed throughout the country. What this means is that the Chinese working class, the world's largest working class, is beginning to move in the direction of mass struggle. When this beast is unleashed, no amount of state repression will be able to stop it.