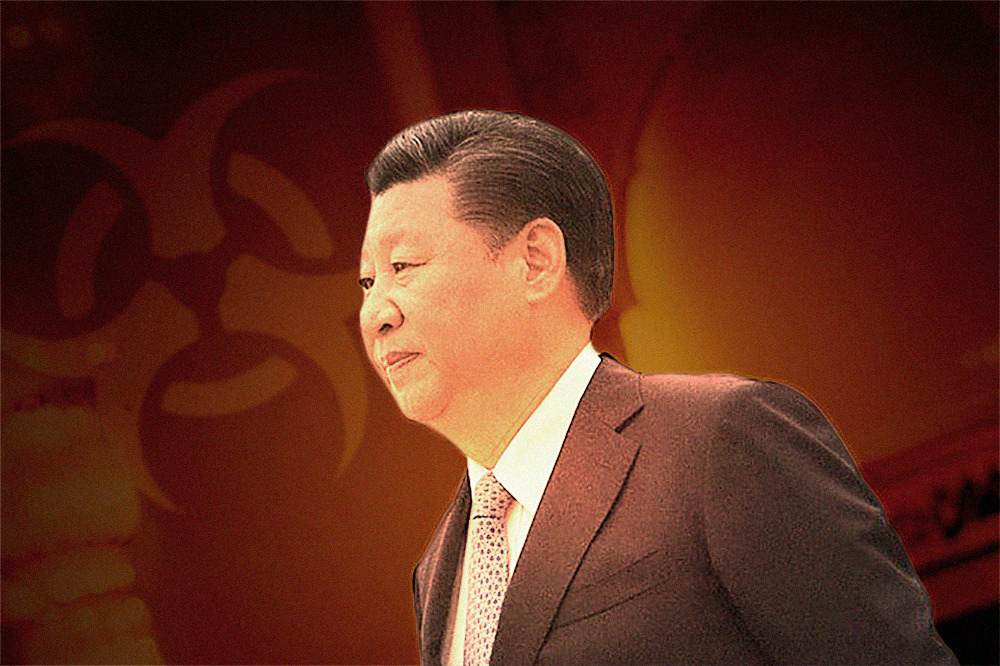 A week ago, China saw the rapid proliferation of protests against the regime’s harsh COVID-19 lockdown measures, many of which quickly acquired a political character challenging the entire capitalist regime of the CCP. Although individually the protests were small, the regime is clearly afraid of their potential to mobilise far larger layers. Now, whilst the regime is cracking down, they are also having to relent on its ‘zero COVID’ measures. But in doing so, they face even more instability in Chinese capitalism.

The protests have come to be known as the ‘A4 Protests’, a reference to the use of blank sheets of A4 paper by protesters, an ironic comment on the fact that any political slogan would immediately be deemed illegal. This movement has seen record numbers of protests occurring simultaneously in major cities around China. Thousands of people fed up with the draconian and often nonsensical lockdown measures of the state took to the streets against the regime. In doing so, they were inspired by the courageous fight of the Zhengzhou Foxconn factory workers against wage theft by management working hand-in-glove with the state, alongside an explosion of anger at an apartment fire in Urumqi.

The protest erupted in major cities in over 19 provinces, including key cities like Beijing and the economic centre, Shanghai. The youth played a particularly important role in the mobilisations, with over 79 universities across the country seeing student protests against the lockdown and the general dictatorial character of the regime. This has been echoed by numerous student protests overseas, notably a large demonstration outside of the Chinese Embassy in London, UK.

At the time of writing, the protests have largely receded, whilst the presence of the police has been beefed up on the streets.

However, some individual protests have persisted, most notably a large student gathering on 5 December at Nanjing Tech University. After students discovered positive cases of COVID-19 had been detected on the campus they had been trapped in by a lockdown, they protested, demanding the school allow them to leave and return home. In a telling exchange, one student shouted at the school security: “if you touch us then you’ll see a second Foxconn!”

Although the regime has succeeded in silencing protests by deployment of its infamous ‘socialist iron fist’ – i.e. the ramping up of surveillance and arrest of leading protesters – it remains nervous. It is clearly sensitive that far larger layers of Chinese society are at their wits’ end with the lockdown measures that have led to job loss, restriction in access to food, and have made daily life impossible.

In a matter of days, the state has already begun showing signs that it is relenting on its prior insistence on the so-called ‘dynamic zero COVID’ policy, a policy that had largely been attributed to Xi Jinping, who has maintained the lockdowns to preserve the regime’s prestige.

In the days following the protests, many major city governments have suddenly changed their tunes. Metropolises such as Beijing, Shanghai, Guangzhou, Shenzhen, Chongqing, Zhengzhou, and Urumqi have rapidly rolled out measures to relax lockdown measures. In particular, the debilitating requirements to show negative PCR tests to access public transport and facilities have been suspended. These are all cities that saw rancorous protests.

On 7 December, the central government itself made the changes to the general national policy through the State Council’s ‘10 New Measures’ (新十条). These mark a dramatic abandonment of any reference to the ‘zero COVID’ doctrine, whilst containing a slew of measures confirming the trajectory towards the winding down of restrictions.

At the same time, it would seem that the regime is also moving mountains to distract the public’s attention away from this humiliating climb down, through a pompous and melodramatic mourning of the death of former leader Jiang Zemin. All major state media outlets, as well as private media, have gone as far as changing their colour schemes to black and white as a symbol of mourning, whilst sensational articles and ceremonies in remembrance of Jiang’s legacy are being streamed via every outlet.

Opening a new can of worms

It is clear that the regime is lifting lockdown measures in an effort to appease the discontented masses. But far from engendering trust among the populace, the rapid opening up will only lead to other serious problems. 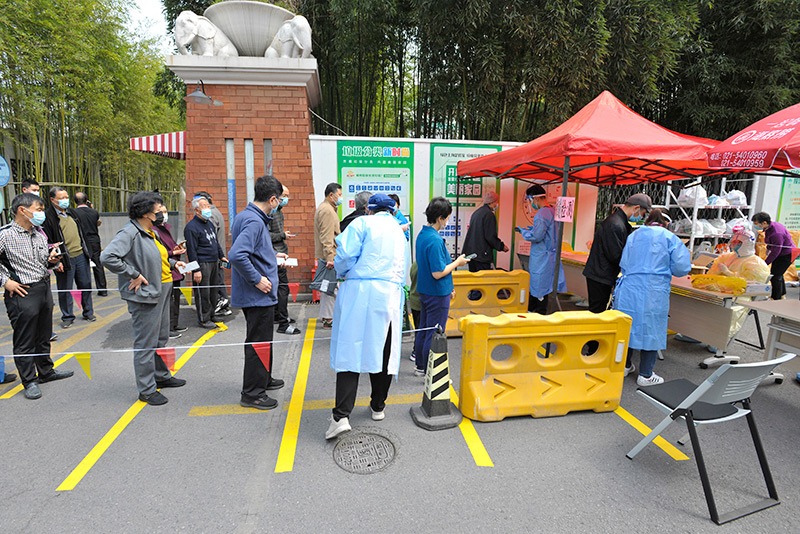 In many cities, the phasing out of the ‘zero COVID’ policy has, as mentioned, begun with rolling back the need for the deeply hated PCR test requirements. Daily PCR tests were mandatory under lockdown measures. Many found themselves having to stand in long, daily queues The policy wasn’t even relaxed amidst violent typhoons!

This was an exhausting trial for the masses, but it was also a very profitable business for some capitalists. Whilst the PCR tests are mandated and enforced by the state, the test kits themselves are produced and operated privately. This is now a multi-billion dollar industry in China, with some companies growing on the back of the pandemic by as much as 376 percent thanks to lucrative contracts. This is an industry rife with irregularities, false reporting of results, and mistakes and bungling, leading to many being pointlessly quarantined.

Although some PCR test mandates have been relaxed, access to many other services still require the tests. However, the PCR tests are no longer funded by the state, and so individuals are expected to fork out from their own pockets.

But more importantly, rapid unlocking of measures, which will surely lead to an explosion of new cases, opens up an uncertain future for Chinese society. With opening up becoming a national policy, there are grounds to doubt whether there exists the infrastructure nationally to cope with the inevitable wave of infections, and the severe cases that will require hospitalisation.

The elderly face a particular risk in China, as the regime has prioritised vaccinating younger people first to get them back to work and the economy going and profits flowing. Older people tend to be less likely to be vaccinated, and vaccine hesitancy is commonplace among them, despite the strict enforcement by the state. As of now, only 40 percent of China’s over 80s have received their booster shot.

In preparation for the influx of infections, the state is increasing its imports of Plaxovid and other COVID-19 treatment drugs. However, the large population of China will make a big influx of hospital patients inevitable. Infrastructurally, it remains to be seen whether the existing hospital system can handle what is to come. Presently, there are less than four ICU beds per 100,000 people. Whereas the regime once boasted about how it built two hospitals in Wuhan within 13 days at the start of the outbreak, replicating this across the country without economic planning is another matter entirely.

But one thing is clear: the cost of ICU stays, which stands at around 10,000RMB ($1434 USD) per day in top grade hospitals, will be unaffordable for many working class patients. Ultimately, ‘zero COVID’ was never going to be possible in a single country. Zero COVID can only be implemented everywhere or else nowhere. Stamping out such a virulent disease like COVID-19 would have required international cooperation, something that is impossible under capitalism, where national gangs of capitalists compete with one another in trade, and in the hoarding of technology and resources.

Now, China looks set to experience the kind of waves of the virus seen elsewhere in the world, where the ruling classes much sooner adopted a ‘herd immunity’ strategy. And like in those countries, waves of infection will starkly expose class contradictions, and above all inequality in healthcare access, workplace safety and education.

All of this points to the likelihood of further chaos ahead, rather than stability, for Chinese society. The regime has relented to mass pressure by allowing the virus to blaze through the population. But the speed of the virus’ spread could very well lead to new dramatic turns, sending the state into panic at all levels. Although the State Council’s ‘10 New Measures’ forbid arbitrary emergency lockdowns, there is no telling what regional governments may do should they find themselves in deep trouble. The regime may yet baulk at the consequences and revert once more to tight lockdowns, further suffocating the people, and further tarnishing the prestige of a regime incapable of tolerating any dissent or challenge to its authority. As distrust in the regime deepens, it may not be long before even broader layers of masses are propelled onto the streets yet again.

Down with capitalist dictatorship. For workers’ democracy!

The CCP regime is now in a Catch-22 situation. They cannot help but to relent on the lockdowns, but they will also carry responsibility for the consequences of the rapid opening up. It does not help that all of this came after the 20th Congress, in which the state has concentrated power at its summit, in the hands of Xi Jinping. One consequence of the extreme concentration of power in Xi’s hands is it makes it harder for him to scapegoat other figures. Responsibility stops with him.

The simple fact is that ‘zero COVID’ cannot be maintained in one country whilst the virus rips through the rest of the world / Image: 中国新闻网

At the end of the day, however, the crisis does not stem from the virus or even the lockdown measures. Rather, it flows from the capitalist economy in China, which the CCP defends. The lockdowns were first and foremost aimed at keeping the market economy afloat while the pandemic devastated the rest of the world.

Businesses received tax cuts and subsidies while the working class languished with job losses and horrible lockdown conditions. The masses’ interests and freedom are always subordinated to the interests of the so-called ‘socialist market economy’ – i.e. the interests of the capitalist class.

While the harsh lockdowns initially produced results better than those seen in the West, the simple fact is that ‘zero COVID’ cannot be maintained in one country whilst the virus rips through the rest of the world. Marxists have pointed this out many times. Simply put, capitalism is a global system, and China is deeply embedded within it.

A genuine socialist country would have been able to use the nationalised resources expropriated from the capitalist class to allow the working class to administer the necessary control measures on their own terms, without loss of pay or interruption in the supply of daily necessities. This was never possible in China, where a dictatorial bureaucracy forced the masses to comply with measures implemented with little explanation, and always prioritising the interests of capital rather than the working class. Experience of these lockdowns has brought the class contradictions of Chinese society into stark relief for millions of workers and young people.

The new turn towards lifting the COVID containment measures was not on the regime’s agenda. It is a panicked response to the ferment from below. No doubt this will not be the last panicked response, and the state may lurch back in the other direction. These zig-zags will create further uncertainty for the masses, shaking up consciousness, feeding into new explosions of anger that are inevitable at a certain stage.

Whatever happens, the irreversible fact remains that the Chinese masses’ distrust of the state is at an all time high. They are justified in their hostility to a regime that dictatorially defends the interest of capital. Under the hammer blow of events, they will come to understand that its overthrow and the establishment of a genuine socialist workers’ democracy is the only way out of the never ending crises that life under capitalism has become.