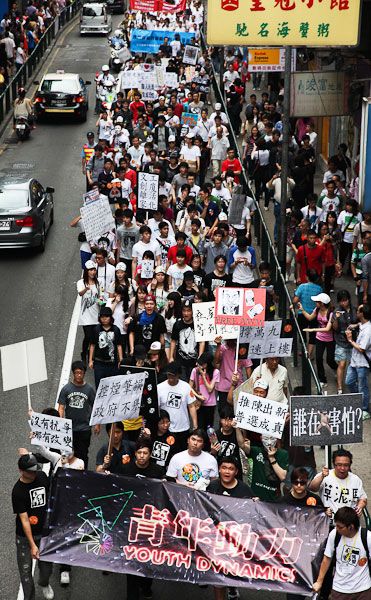 During the revolutionary events in Egypt, the Chinese authorities displayed extreme nervousness, increasing the police presence on the streets and clamping down on the Internet, where references to the Egyptian Revolution were banned. Why should the rulers of China be so worried about events taking place in distant countries?

The media is full of glowing reports about China’s economic growth, which is supposed to have shrugged off the world economic crisis, averaging annual growth of over 10 per cent. But these figures do not tell us anything about the effects of this economic growth on the mass of the population. It tells us nothing about the gross inequality and the growing gulf between rich and poor. It tells us nothing about the 150 million unemployed, or the plight of millions of Chinese peasants who are forced to migrate to overcrowded cities in order to earn a living in factories where they suffer extreme exploitation and conditions resembling industrial England of the times of Charles Dickens.

Unlike Russia, the capitalist counterrevolution in China has been carried out in a controlled manner, under the iron rule of the bureaucracy and the so-called Communist Party, which now admits capitalists into its ranks and is seen as a vehicle for careerists and social climbers. Workers have few rights and the role of the official trade unions is to police them, not to fight for their interests.

China resembles a gigantic pressure cooker with the safety valve clamped shut. It can explode at any time, without warning. This was shown recently by events in Xintang, in the industrialised Guangdong province of southern China where for three days workers rioted against intolerable conditions, burning police vehicles and fighting with the police. Broadcasters in Hong Kong reported that armed police fired teargas to disperse the crowd.

The city of Xintang is around an hour's drive from Guangzhou, the affluent capital of far southern Guangdong province, which lies near the border with Hong Kong and produces about a third of the country's exports. About 150 million workers have moved from the countryside to the cities in search of a better standard of living.

The clashes on Friday 10 June began after police attacked a pregnant woman street vendor, Wang Lianmei, during a crackdown on street stalls. The state news agency Xinhua claimed that she fell during the dispute, while other accounts said that the chengguan – low-level law enforcement officers – had shoved her. Whatever version is correct, there is no doubt what the mass of the people believed.

Migrant workers from her province, Sichuan, gathered immediately. The police have a reputation for thuggish behaviour, and when police vehicles were called to the scene, they were met with a shower of bottles, bricks and stones. Most of the protesters were migrant workers like the woman who suffered police aggression.

The protesters wrecked the government office in the city's Dadun suburb, setting alight at least six vehicles. Parts of iron gates and spiked fencing lay twisted and broken. The crowd began hurling bricks, rocks and bottles at local officials and police, as well as vandalising ATMs and police posts. As rumours spread that police had killed Wang's husband, Tang Xuecai, and that she had been seriously injured another crowd gathered the next day.

Local media said Tang had appeared at a press conference on Sunday to say that his wife and their baby were “fine” and that he was “happy with the government's handling of the case”. But these soothing words cannot conceal the burning anger that is seething just below the surface of Chinese society.

Many locals were too afraid to speak about the incident, and those that did refused to give their name for fear of reprisals.  “The atmosphere is tense and we all feel a bit nervous. We are not supposed to talk about it,” said You, a 42-year-old garment worker who, like others, refused to give her full name.

“We’re angry,” a migrant worker from Sichuan told Reuters. The man was too nervous to reveal his name, given the massive deployment of riot police in his neighbourhood. “I feel the rule of law here doesn't seem to exist... the local officials can do what they want.”

Chao, a 27-year-old owner of a denim shop in Xintang told The Bangkok Post (15 June): “It was very scary – the scariest thing I have encountered since I was born.” Chao said at one point in the melee, there were a “few thousand rioters” facing off against a massive police force, adding: “They burnt down one of the buildings.” And, “Together they flipped police cars and set them on fire. A few hundred policemen then came. They started beating people indiscriminately with metal batons”.

Local officials naturally tried to play down what had happened. “The case was just an ordinary clash between street vendors and local public security people but was used by a handful of people who wanted to cause trouble,” said Ye Niuping, the local mayor, urging residents not to spread “concocted rumours”.

The mayor’s words are interesting, and he said more than he intended. He regards this as “just an ordinary clash between street vendors and local public security people”. That means that such clashes are not exceptional but regular occurrences. Only this time, the accumulated anger and resentment of the people boiled over. This bears a striking resemblance to the explosion that shook Tunisia after the suicide of a young street vendor, following police brutality.

“There were many people out on the streets late last night, shouting and trying to create chaos. Some of them even smashed police vehicles,” said a worker from the nearby Fengcai clothing factory, adding that bosses barred employees from leaving the plant. An employee at a hotel in the area said police had told them to stay indoors.

The report of factory bosses preventing the workers from leaving the factory is also interesting. It shows they feared that their workers would join in the protests. State news agency Xinhua reported on Monday that officials had sent work groups to villages, factories and residential communities “to set the record straight”. But Guangdong police headquarters declined to comment and calls to the local police station rang unanswered, said The Guardian in its report of Monday 13 June.

More than 1,000 police officers were drafted into Xintang after the disturbances. By Wednesday an uneasy calm had settled on Xintang, according to an AFP reporter, but many shops and restaurants remained closed, while police armed with batons and shields and armoured vehicles carried out regular patrols, creating an atmosphere of fear and intimidation. But as many as 1,000 later gathered despite the heavy police presence.

“All around the village you can see burn marks on the ground because of the fires. I have been stopped five times by policemen asking what I was doing here,” a 59-year-old motorcycle taxi driver surnamed Chen told The Bangkok Post. “On the first day of the riot, the fighting continued from 11:00 pm to 6:00 am the next day – it was very bad. You can see today it’s much quieter but authorities are still out in full force,” he added. 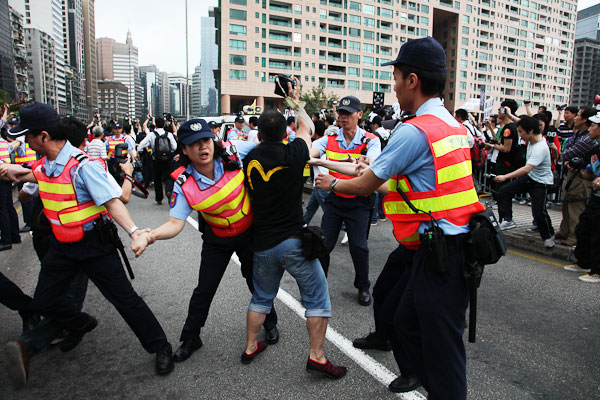 1 May, Macao. Photo: Chi Chio Choi on Flickr These events must cause a shudder of fear in the ruling echelons. They highlight the growing frustrations in Chinese society. A recent spate of incidents underlines the explosive situation that lies beneath the surface of China’s economic growth. In each case the cause of the unrest seems very different, yet the underlying causes are the same: savage exploitation, low wages, extreme inequality, a complete lack of rights and police brutality.

What happened in Xintang is not an isolated case. In the first week of June hundreds of workers clashed with police in Guangdong, following a dispute over unpaid wages. In Lichuan, Hubei, as many as 2,000 protesters attacked government headquarters recently after a local politician who had complained about official corruption died in police custody.

Other clashes have erupted in southern China in recent weeks, including in Chaozhou, where hundreds of migrant workers demanding payment of wages at a ceramics factory attacked government buildings and set vehicles ablaze. Two officials were detained in central China after 1,500 protesters clashed with riot squads following the death in police custody of a local legislator.

Following the latest protests, a state think-tank has warned that China's tens of millions of workers pouring into the cities from the countryside would become a serious threat to stability unless they were treated more fairly. These are millions of low paid workers who have migrated to the cities of China's manufacturing heartland in search of work.

In an attempt to head off trouble, wages have improved, but there is huge inequality between rich and poor and the gap between migrant workers and local residents, which has fomented resentment and made many feel like second class citizens:

“There are many towns in Guangdong which are still very much [divided between] locals and outsiders. Migrant workers are still doing the lowest paid, dirtiest jobs and suffer discrimination on a daily basis. That’s going to cause resentment and anger to build up” said Geoff Crothall of Hong Kong's China Labour Bulletin. But he added: “There is a lot of pent up anger and frustration among ordinary people – not just migrant workers”.

Although data is hard to come by, social unrest in China is thought to have become increasingly frequent. There are tens of thousands of strikes, peasant protests and other public disturbances reported each year, often linked to anger over official corruption, government abuses and the illegal seizure of land for development. Such incidents have been increasing in recent weeks.

Inner Mongolia in north China witnessed the biggest street protests for 20 years when a Mongolian herder was killed for trying to stop coal trucks trespassing on grasslands. Ethnic Mongols protested for days against the encroachment of grasslands by mining concerns. And in late May a disgruntled man killed four people including himself in revenge bombings over property confiscation in the south of the country.

The Chinese Academy of Social Sciences has estimated that there were more than 90,000 “mass incidents” in 2006, with further increases in the following two years. The panicky response of the authorities indicates that they are well aware of the danger that these widespread grievances will eventually burst out in an explosion like that which swept away the regimes in Tunisia and Egypt.

The ruling circles are more nervous than at any time since the massacre at Tiananmen Square in 1989. They are preparing for unrest on a far bigger scale. China has increased its domestic security budget by 13.8% this year, to 624.4bn yuan (£59bn). This means that for the first time China is now spending more on internal security than on defence.

China’s rapid economic growth and industrialization has enormously strengthened the working class, which is no longer prepared to tolerate low wages and slave-like conditions in the factories. .Social explosions are being prepared, which can occur suddenly, when nobody expects them. To paraphrase the words of Napoleon: “The Chinese working class is a sleeping giant, when it wakes it will shake the world.”