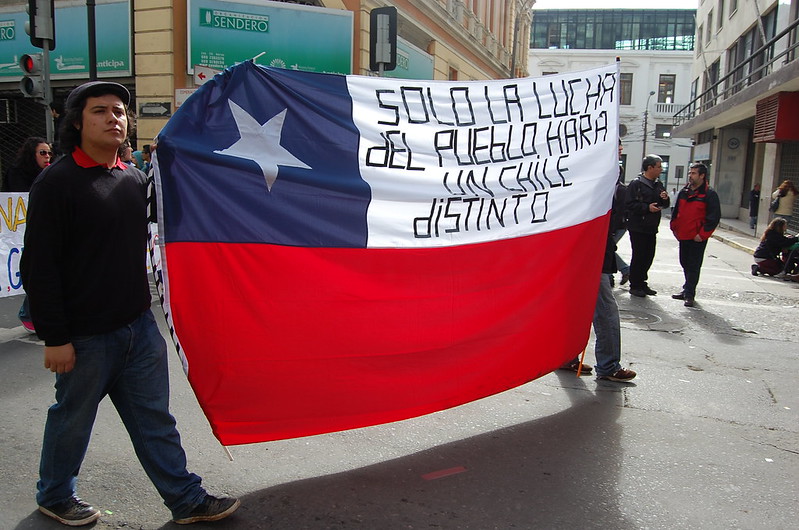 The Chilean bourgeois institutions, like an old rickety wardrobe, creak through all their cracks at the slightest breeze. This last month, these failing institutions have been brought to their knees, as the result of a bill that would authorise, for the third time, a withdrawal of 10% of pension funds by contributors from private pensions. President Sebastián Piñera was defeated on this issue and once again, it was the organisation of the working class that was the driving force of his defeat, expressed in a formidable mobilisation of dock workers and the threat of a general strike.

The few measures taken by the government have failed to contain the impact of the severe economic crisis caused by the pandemic. According to a World Bank report, in April this year an estimated 2.3 million people joined the ranks of the ‘economically vulnerable’. Meanwhile, per capita income fell by around 40% in households where at least one adult lost their job.

Even at the beginning of the year, the ECLAC warned that the Chilean economy – and the economy of the wider region – is going through one of its greatest crises in its history, with a fall in GDP in 2020 of 6%. This was reflected in the loss of more than a million jobs, and an increase in absolute poverty of almost 4%. Meanwhile, figures from the National Institute of Statistics (INE) showed that the unemployment rate in 2020 reached an average of 10.7%, an increase of more than a third compared to 2019. This increase was accentuated by the large number of people who left the workforce, and then postponed or slowed down their search for a new job.

Direct transfers of fiscal support to the most severely affected families have arrived excessively late and have been dealt with extremely bureaucratic. One such method of transfer, the misnamed “Middle Class Bonds”, consists of a one–time delivery of $500,000 (roughly US$700) to people whose average monthly income in 2019 was between $298,833 and $2,000,000 (US$428 and US$2,864), and who have demonstrated a decrease in their income of at least 20% in comparison to the previous six months. This aid, however, has not reached the vast majority of families that urgently need it, largely due to cumbersome procedures to demonstrate compliance with the requirements, or in the case of informal workers, because they are unable to prove their income or losses.

A Chilean economist pointed out to the BBC that “of all the fiscal spending that is made in Chile, a little more than 3% are monetary transfers to families or people in social exclusion.” This is reflected in the fact that of the US$12 billion that was set aside for emergency aid, only little more than a third was spent last year. Faced with this situation, the government decided to grant an Emergency Family Income (IFE) of $100,000 (US$143) per person, for three months for the 80% most economically vulnerable in each region (the application to which requires a series of new, complex procedures). This aid is clearly insufficient, considering that the poverty line set by the state of Chile is $450,000 for an average household of four people. “I am too rich to receive aid from the State and too poor to request a loan in the bank” is a phrase commonly heard these days. 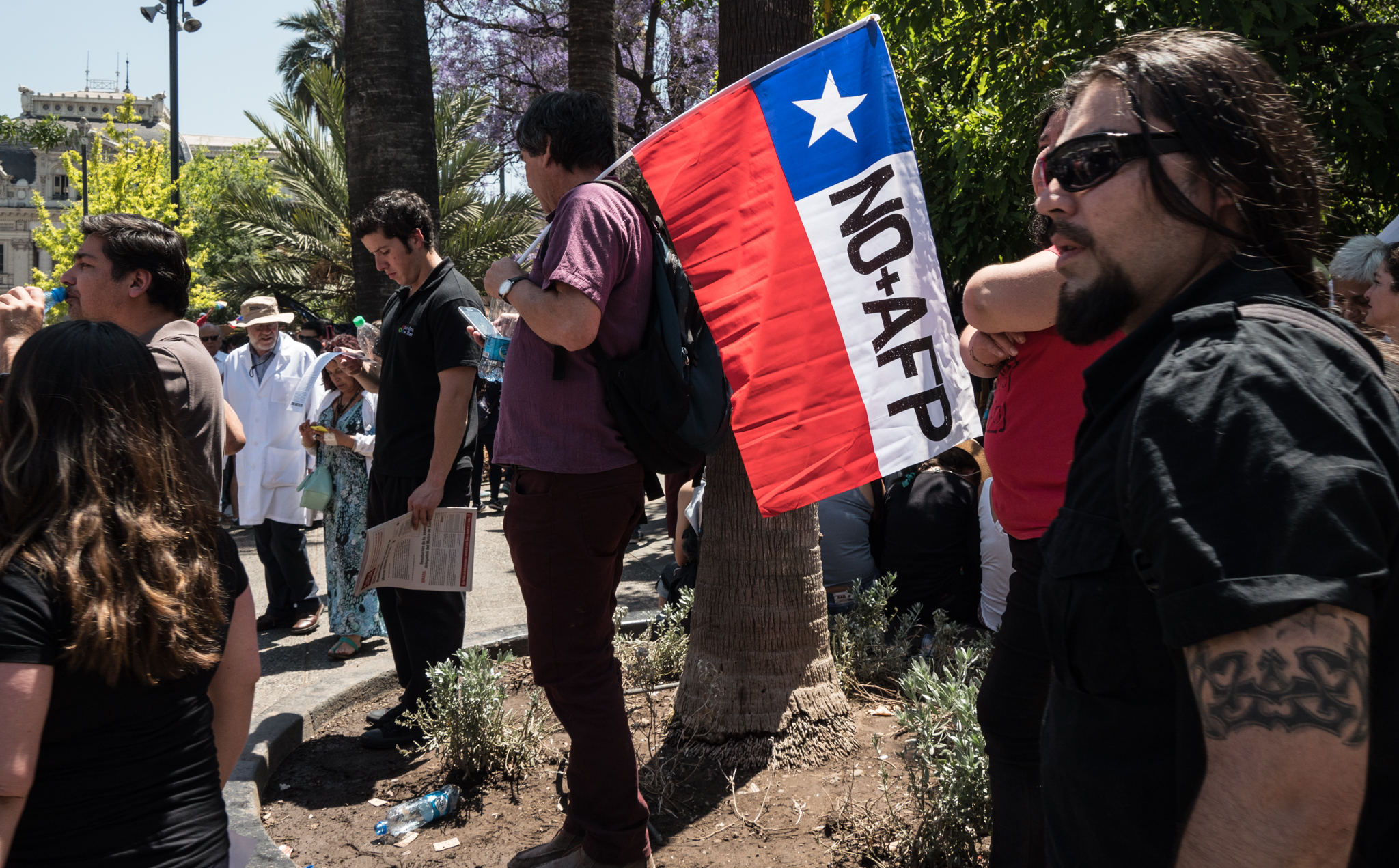 The demand has once again been raised for access to a portion of retirement savings in the hands of pension fund managers (AFP) / Image: Francisco Osorio, Flickr

Faced with the greed and sluggishness of the government, and the desperation of the population, demand has once again been raised for access to a portion of the retirement savings in the hands of pension fund managers (AFP). This demand was put forward in July and December 2020, but it faced fierce resistance from the government, from left-wing and right-wing political parties, as well as from the capitalist class more generally.

The workers are clear that they should not have to use their own savings to alleviate the effects of the crisis. Rather, the capitalists should be made to pay, especially those who have earned monstrous profits in this period. Profits in the banking industry, for example, reached about US$1.59 billion in 2020. In an even more humiliating case, in May, three of the largest AFPs withdrew profits equivalent to almost US$211 million to distribute among their shareholders. Big business and their political representatives in the government, however, have systematically refused to implement a temporary tax reform to collect the finances needed for an emergency basic income that would allow people to meet their minimum needs, leaving the early withdrawal of pension savings as the option of last resort. The workers realise that – with or without this early withdrawal – their pensions will barely be enough to live on.

This popular demand was cleverly picked up by a congresswoman of the Humanist Party, Pamela Jiles. Jiles is a political chameleon and opportunist with aspirations for the presidency, who has made this campaign her central talking point. Despite initial opposition from the traditional political parties, little by little the pressure of the masses and the looming presidential elections weakened the resolve of the parliamentarians.

Even the majority of right-wing deputies and senators have, one by one, sided with the legislative initiative raised by Jiles to carry out a temporary modification of the constitution, allowing the withdrawal of 10% of the pension funds. Precisely because it is a constitutional reform, the exclusive prerogative of the executive, the government and the bosses have used this technicality to oppose the parliamentary maneuver, and have repeatedly threatened to go to the Constitutional Court (TC) to challenge it.

At the first attempt, battered by a defeat in Congress and by intense protests in the form of barricades and widespread pot-banging (caceroleos), President Piñera reluctantly signed the bill without resorting to the courts.

As soon as the first 10% had been withdrawn, the second was already being discussed in Congress. In a failed attempt to show muscle, Piñera decided to block it in the TC, which – unsurprisingly, given the political bias of its members – accepted the presidential appeal. However, the government had to give in once again to the pressure of the workers, and ended up promoting its own project, practically identical to the one it had challenged.

In April, in the middle of a severe second wave of infections (caused largely by the ineptitude and prestige politics of the government during the handling of the health crisis), the idea of a third withdrawal of 10% of the pension funds found an echo in the congressmen who a year ago discarded it. The opposition, followed by the ruling party, compelled by the fear of a new social explosion equal to, or even greater than that of October 2019, overwhelmingly supported the initiative. The government was put between a rock and a hard place for the third time in a row. Two days before its approval, on 20 April, the government submitted a new request to the TC in order to stop the withdrawal, aware that this third bill would be enough to collapse not only the pension system, but the Constitution itself, which enshrines the right to property over the rights of the people. 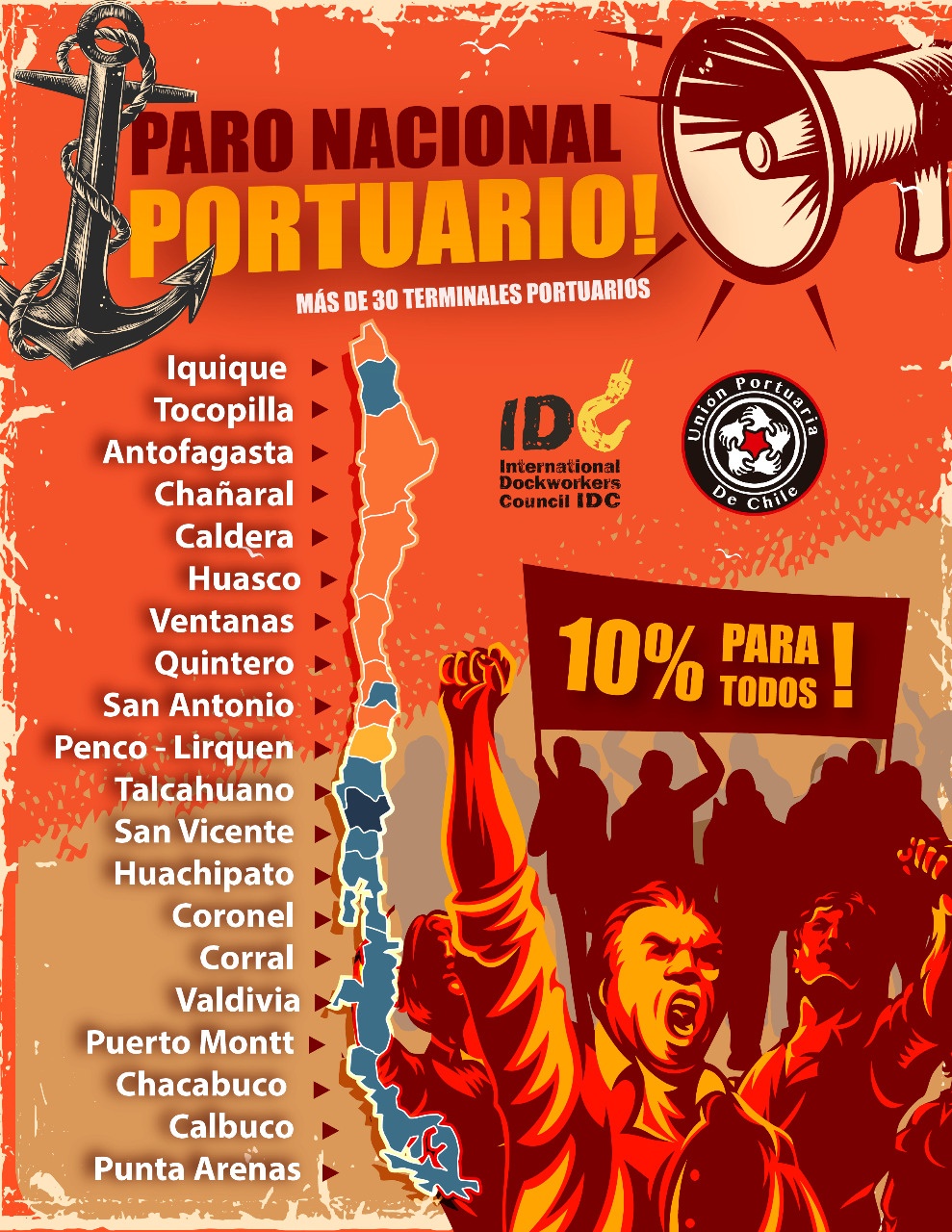 The Dockers Union of Chile, supported by the International Dockworkers' Council, called for a strike in 25 docks on Monday / Image: fair use

On Friday night, widespread caceroleos and barricading of the streets were repeated across the country. Meanwhile, the Dockers Union of Chile called for a strike in 25 docks on Monday; the Federation of Copper Workers was called to alert and were considering action; and the United Workers’ Center of Chile (CUT), the biggest Trade Union in the country, called for a “General Strike for Health” on the following Friday. The courage and determination of the dockers is an inspiration to the rest of the working class, with militant barricades and road blockades spreading from Iquique to Punta Arenas, shaking the whole establishment.

There were even displays of international workers’ solidarity, when the International Dockworkers’ Council threatened a global blockade of Chilean shipments. During the weekend, the government was nervous, and on Sunday night it staged a show with ministers and presidential candidates from the ruling coalition, which was televised nationally. In it, Piñera announced that although the government would not withdraw its request from the TC, it would agree to submit to parliament its own (limited) 10% withdrawal project, just as it had previously.

But the dice were already cast and Piñera's move backfired. On Tuesday morning the TC announced the rejection of the appeal that sought to stop the withdrawal. That same afternoon, a defeated Piñera was forced to present the bill approved by parliament and withdraw his own. The events showed that not even this final anti–democratic bastion, the TC and its political operators, were willing to go so far as to provoke a new insurrection.

The next morning rivers of ink ran in the bourgeois press, mourning the death of the 1980 Pinochet Constitution and its protection of neoliberal economic principles. This, despite the fact that the Constitution had already been wiped out in the October 2020 plebiscite, when 79% of Chileans voted in favor of convening a constituent assembly for 2021! No less distraught were the statements of businessmen and right-wing economists, who predicted the destruction of the Chilean pension system and the collapse of the markets, although the actual stock market’s performance was a pale reflection of their doomsday predictions. Meanwhile, in a state of euphoria, Pamela Jiles announced a fourth and fifth withdrawal bill to the press.

Last Friday the symbolic Plaza Dignidad was taken over by the police in fear that the call for the general strike would lead to violent demonstrations. With the president’s popularity through the floor at a mere 9% approval rating, the ‘democratic’ opposition – as they like to be called – decided not to let Piñera’s government fall. Showing their ‘republican’ credentials and their “attachment to institutions”, they froze a constitutional indictment that sought to dismiss him for – among other reasons – his appalling handling of the economic and health crisis, and the serious human rights violations that took place during the October insurrection.

The President of the Senate, a Christian Democrat, is now positioning herself as a conciliatory figure to seek consensus in the broken relationship between the executive and the legislature, with nods to the CUT, capitalising on their popularity in the polls. Meanwhile, the former Spanish judge Baltasar Garzón, the Chilean Human Rights Commission, the American Association of Jurists and the Centro di Ricerca ed Elaborazione per la Democrazia, sent a letter to the International Criminal Court, asking them to investigate, accuse and start a trial against Sebastián Piñera and his civil, military and police collaborators, “for crimes against humanity committed in a generalised and systematic manner since October 2019.”

The old, hulking institutions erected by Pinochet and his neoliberal collaborators during the dictatorship, and propped up by their centre-left partners, have never been more unstable. Its institutional pillars (the presidency, congress, courts, armed and security forces, constitution and their privatisation model) have been shattered by the force of a number of blows delivered by the masses in the streets.

However, these institutions still stand, sustained by their own inertia and by fragile patches applied by a class that refuses to hand over its privileges. It will only collapse when the organised workers mobilise to destroy the bourgeois state apparatus and establish the rule of the workers. The working class and the masses have already demonstrated both their will to fight and their strength; what is lacking is a leadership that is up to the task.