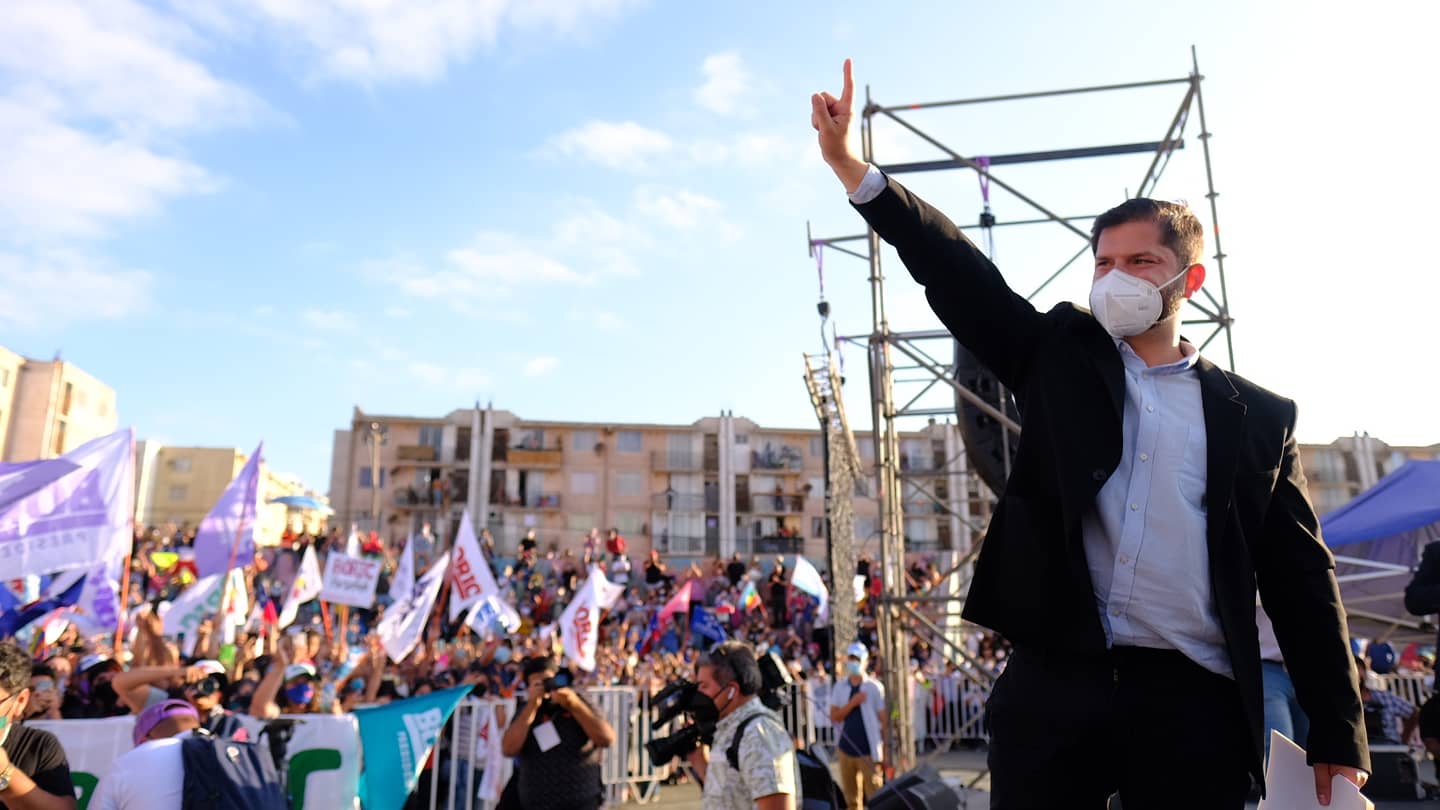 The candidate of Apruebro Dignidad, Gabriel Boric has won the presidential election with 56% of the votes. In absolute terms, this is a record majority, with some 4.6 million votes cast for Boric, putting him almost 1 million votes ahead of the pro-Pinochet candidate, Juan Antonio Kast, who obtained 44%.

After the low turnout in the first round (47%), the Apruebo Dignidad campaign managed to mobilise a significant number of votes in working-class and popular districts, where it obtained a wide advantage, as in Puente Alto (70%) and Maipú (66%), with the turnout rising to 55% nationally in the second round. Compared with wealthy districts, where the vote increased by about 4 points on average, participation increased considerably more in poor urban districts, reaching a 10-point increase. With a correct class instinct, workers and youth mobilized to defeat Kast. In total, there were 1.25 million more votes cast in the second round.

In Antofagasta, in the north of the country, the second round result produced a surprise, with Boric gaining a comfortable 20 point majority. In the north, the populist candidate Parisi had come out on top in the first round, before declaring his support for Kast. But despite this, Boric managed to win a significant part of that vote, recapturing a traditionally left-wing vote in that mining region.

The international press has taken to describing the president-elect as the left-wing “millennial” who won Chile’s elections. At 35 years old, Boric is the youngest president in the history of the country. Some of the press highlighted his social-democratic programme, in contrast to the conservative and reactionary ideas of Kast.

Comparisons with other groupings representative of a “new left” such as Podemos (Spain) and Syriza (Greece) are already commonplace. Indeed, Aprueblo Dignidad, the governing coalition of the Broad Front with the Communist Party, will have a left-reformist character, in a time of capitalist crisis in which capitalism has no margin for reforms. These are new political groupings that have erupted onto the electoral scene in the wake of the debacle of the traditional parties that governed in previous decades. They summon the hopes of layers of the youth and workers who desire to see profound reforms carried out, but these progressive governments fail to overcome the straightjacket of capitalism in crisis.

In the current context, after two years of pandemic and economic crisis, there is very little room for such a government to deliver significant reforms. Rather, forecasters are predicting an economic slowdown in 2022.

In any case, Boric has not even presented a programme of profound reforms. He talks about fiscal responsibility, and change through “slow but firm steps”. In his programme, he insists:

“Our Government will have as a priority recouping a trajectory of credible fiscal consolidation, with a gradual and sustained reduction of the structural fiscal deficit.”

He wants to prove himself to be a good manager of the business interests of the capitalist class and to thus put the bourgeoisie at ease. His message to the capitalists is: “the social divide needs to be healed so that the country can grow.” The name for this is a programme of class conciliation.

Kast’s candidacy managed to draw together the ranks of the most reactionary, hardline right wing, whose interests had been threatened by the popular insurrection dating back to 2019. The death of Pinochet's widow, Lucia Hiriart, just four days before the elections, placed the memory of the Pinochet dictatorship at centre stage of the political landscape. Following the result of the first round, the candidacy of the pro-Pinochet Kast brought back memories of the horrors of the civilian-military dictatorship and the threat posed to the democratic rights of the oppressed, in comparison to which Gabriel Boric's moderate proposals appeared like an epic alternative. As we explained after the first round, it was clear that broad sections of the working class would now instinctively seek to vote together against the possibility of a Kast government that would attack democratic freedoms head on.

This sense of urgency was accentuated on election day on Sunday, when the government was accused of sabotaging public transport in order to frustrate the vote in poor and working-class communities. A transport union leader explained how this infamous maneuver was carried out by the transport companies, giving the drivers the day off so that most of the buses were unable to circulate. This situation provoked initiative and solidarity, with those who had cars ferrying people closer to their polling stations. But for such tricks, the turnout could have perhaps been even greater.

It is significant for what is to come that some among business and among the right wing were willing to use extra-parliamentary methods. We saw this in the way the truck owners’ leader, Sergio Pérez, attacked the rail transport proposal in the Apruebo Dignidad programme. This same reactionary bosses’ organisation threatened to stop the supply to the country in the midst of the pandemic, as well as pressing for the militarisation of the Wallmapu (Mapuche territory). In the period that is opening, it will be important to remember that only the solidarity and grassroots organisation of the workers can defeat the employers’ sabotage.

The crystallisation of the “Agreement”

The slogan of October 2019 was, “it’s not 30 pesos, it's 30 years”, signifying a rejection of the parties that governed after the dictatorship, deepening the capitalist economic model of privatisations and leaving human rights violations unpunished. The first president after the end of the dictatorship, Christian Democrat Patricio Aylwin, is famous for the phrase “justice as far as possible”. There was a policy of agreements, of conciliation with the right wing and big business, whose interests were enshrined in the 1980 constitution, after the historic defeat of the Chilean working class in 1973. 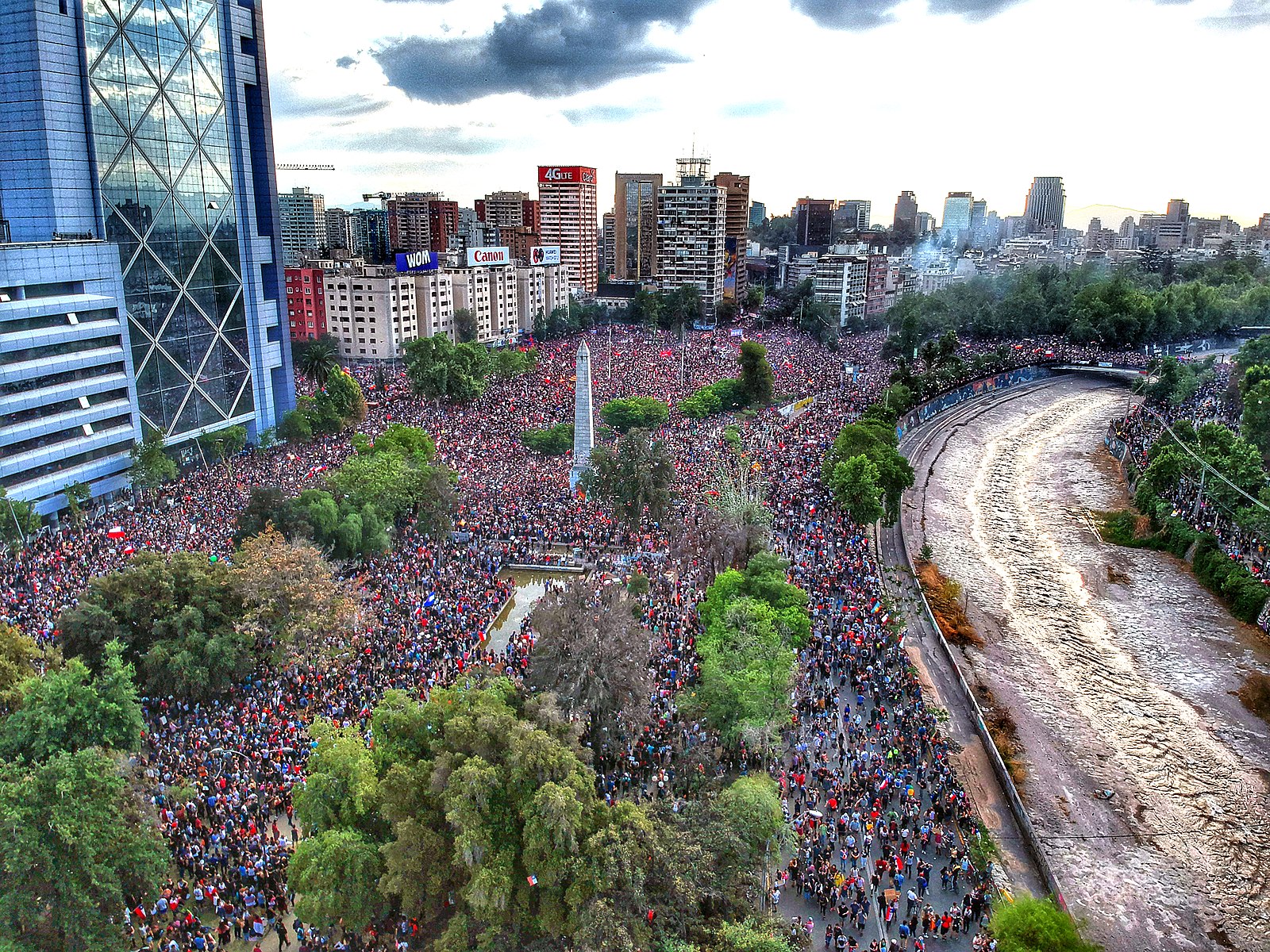 The slogan of October 2019 was, “it’s not 30 pesos, it's 30 years”, signifying a rejection of the parties that governed after the dictatorship, deepening the capitalist economic model of privatisations and leaving human rights violations unpunished / Image: Hugo Morales, Wikimedia Commons

During the transition we were sold the idea that the dictatorship had fallen with the plebiscite of the YES and the NO of 1988, simply by the work of a pencil and a paper. The importance of mass mobilisations during the days of national protest was buried. The hundreds of thousands of people who risked their lives fighting against the dictatorial regime, hoping to conquer the joy of a better life were forgotten about. The Christian Democratic president Aylwin, who received the presidential sash from Pinochet, was a key figure in organising the coup in congress during the government of the socialist Allende in the 1970s. At the end of the dictatorship, secret agreements were made with the Concertación parties (mainly the Socialist and Christian Democratic) to preserve the economic and ideological pillars of the old model and to grant impunity to the armed forces. In this election, the Concertación was united in its support for Boric.

After 30 years, during the October rebellion in 2019, a new generation that had not experienced the dictatorship embraced the experience of older generations. The idea was to put an end to the policy of “justice, as far as possible” once and for all, and rather to fight for a life that is truly worth living. Right-wing President Piñera declared war on the poor and the workers, and the angry masses defeated his state of emergency. The general strike put the government on the ropes. But the agreements and impunity returned. The so-called “Agreement for peace and the new constitution”, in which Boric played a key role, was an agreement amongst the parties of the regime to save the criminal government of Sebastián Piñera. Instead of peace, repressive laws continued and the Wallmapu remained militarised. Piñera is still in power two years after the uprising which sought to remove him. Now Gabriel Boric will have the “honour” of receiving the presidential sash from his hands.

Boric has proven to be a politician who knows how to stand in the right place at the right time, positioning himself to engage in “dialogue” to reach agreements and elevate his own political career. At the moment he is the largest shark that has emerged from the splits, alliances and internal disputes of the groups that have gone under the umbrella of the “Broad Front”. The history books will already record Boric as the prophet who created that “Agreement” that marked the derailing of the October uprising along bourgeois, institutional lines. The Boric government represents the crystallisation of the parliamentary path of the “Agreement”, in opposition to the path of the rebellion of the masses. In this sense, Boric's triumph represents the closing, by agreement at the top, of the insurrection of 2019.

The composition of the new parliament does not give the next government the necessary majority to approve its reforms. On the other hand, Apruebo Dignidad now hopes to bring the constitutional process to fruition. Doing so therefore necessarily means continuing to resort to the repudiated “agreements policy”.

The government will be under a lot of pressure from the streets. In the electoral victory rally, which took the form of a massive celebration, slogans were heard demanding the release of the political prisoners of the 2019 revolt and the end of the private pension system (AFP), to which Boric was forced to give unconvincing answers. He was also hissed and booed when he mentioned his intentions to open a dialogue with the right wing: “With Kast we will know how to build bridges so that our compatriots can live better.”

In reality, the kinder you are to the right, the more emboldened it will feel to make up lost ground and fight back. The resistance of the right to substantive changes will provoke the reaction of the masses. Inevitably, the government will have to choose whether to repress the mobilisations or rely on them to overcome the resistance of the right. But the masses will push beyond Boric’s programme of restraint and fiscal responsibility. The Communist Party will also find itself enmeshed in a dilemma as to how to keep one foot in the government, and another in the street.

Comparisons with the Castillo government in Peru are appropriate. Castillo’s programme in relation to the mining companies was more radical than Boric’s. Like Boric, Castillo is in the minority in congress. Faced with pressure from the bourgeoisie, the army, bourgeois public opinion and the multinationals, Castillo quickly began to make concessions, abandoning the most advanced points of his programme. Boric is pointing in the same direction.

The underlying social and economic crisis cannot be solved on the basis of reforms within the framework of capitalism. It must be expected that sooner or later there will be important mobilisations over the demands still pending from October 2019. The defeat of Kast increases the confidence of the masses, and what has now been expressed through electoral channels will be expressed in demands on the new government and in mobilisations of the masses when faced with half measures.

Gabriel Boric's lack of determination to carry out radical change aimed at improving living conditions will be exposed. For a profound transformation of society we need to put an end to the capitalist system and establish a workers’ government. We can only rely on the strength of the mobilisations of and the self-organisation of the working class. The key is to build a revolutionary leadership that is up to the tasks that the working class posed in the October insurrection.