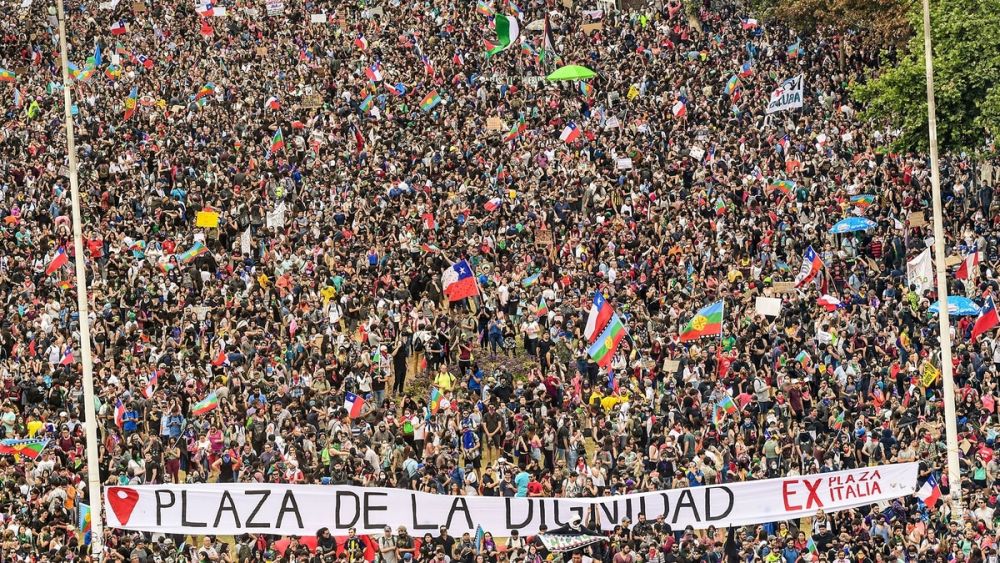 The general strike on 12 November was a huge success that put the government against the ropes. Hundreds of thousands, possibly millions marched across the country: 300,000 in Santiago, 40,000 in Valparaíso, 100,000 in Concepcion. The strike was solid in health, education, the public sector, the ports and sections of the mining industry, and had a widespread following in other industrial sectors. It revealed the strength of the working class in a capitalist country, which is able to paralyse the economy. Almost a month after beginning, the Chilean uprising continues to advance and has not been stopped by repression (with thousands of wounded and detained, more than 200 losing eyes and 21 dead), nor Piñera's phoney concessions.

At the end of the day, and after the massive demonstrations, there were clashes with the police and barricades went up throughout the country. We must be clear: violence is the result of the brutal repression of the police. The vicious police siege in [the Santiago de Chile neighbourhood of] Lo Hermida the night before was yet another incident to add to the numerous human rights violations that have ignited popular anger. A group of protesters attacked, managed to enter and set fire to the Tejas Verdes Regiment of the army, which had housed the largest torture centre in Latin America. The youth have been fighting back against the police for days and defending themselves against their attacks with increasingly refined methods. It is necessary to organise the self-defence of the mobilisations and neighbourhoods through committees of protection and security.

The general strike also showed a clear rejection of Piñera's last manoeuvre of offering to convene a "constituent congress" that would be made up of members of the current parliament. It is a transparent move. The uprising is against the regime and the regime wants to appear to reform itself from above, so that nothing changes. At the same time, the opposition parties (from the DC to the PC) released a joint statement rejecting Piñera's proposal and instead demanding a Constituent Assembly. The next day, negotiations were opened between the ruling party and these oppositionists in order to reach some kind of agreement. The latest proposal is for a “constitutional convention”, partially made up of delegates elected by a popular vote and others from the current parliament. All these manoeuvres also include, in a very active way, Desbordes: the leader of reactionary party RN. The Association of Municipalities that his party presides over is organising its own plebiscite on the modification of the Constitution.

When the mobilised people demand a Constituent Assembly, what they want is to overthrow the entire regime inherited from the dictatorship. But we must warn that a Constituent Assembly as it is being proposed is just another bosses' parliament. The ruling class, terrified of a revolutionary overthrow, is perfectly capable of calling of a bourgeois CA in a few months’ time, with the aim of trying to remove the movement from the streets and take it to the safer terrain of bourgeois constitutionalism.

In reality, what is at stake now in Chile right now is the question of who rules: whether the capitalist class through its parties and institutions, or the working class and the people mobilised in the streets. It is necessary to strengthen the structures that the movement has already given itself in the form of territorial assemblies, self-convened cabildos [open councils] and strike and defence committees. These assemblies and cabildos should be coordinated by elected and recallable delegates into regional cabildos and a National Congress of the Working Class and the People, or a People's Assembly. This is the correct answer to the manoeuvres that are being cooked up from above.

The Dockers’ Union and the Trade Union Block of the Social Unity have threatened to call a "progressive general strike", but the aim demanded by the streets is still not being considered: Killer Piñera Out! It is necessary to organise an escalating plan of struggle that culminates in an all-out general strike to bring down Piñera and his regime. The government is against the ropes. Cracks have opened in the repressive state apparatus, overwhelmed by the popular response. On the night of the general strike, the army did not allow Piñera to declare a state of emergency for fear of the consequences this could have. Now is the time to push forward and finish off this rotten government.

The most pressing demands of the uprising (down with repression, no more AFPs [private pension plans], healthcare for all, free education, reversing privatisations, labour and union rights, national democratic rights for the Mapuche people etc.) can only be achieved with root-and-branch change. If the working class takes power and expropriates Piñera, the bosses and the multinationals, all the wealth created by the working class can be used to meet the needs of the majority and not feed the parasitic, profit-hungry minority.