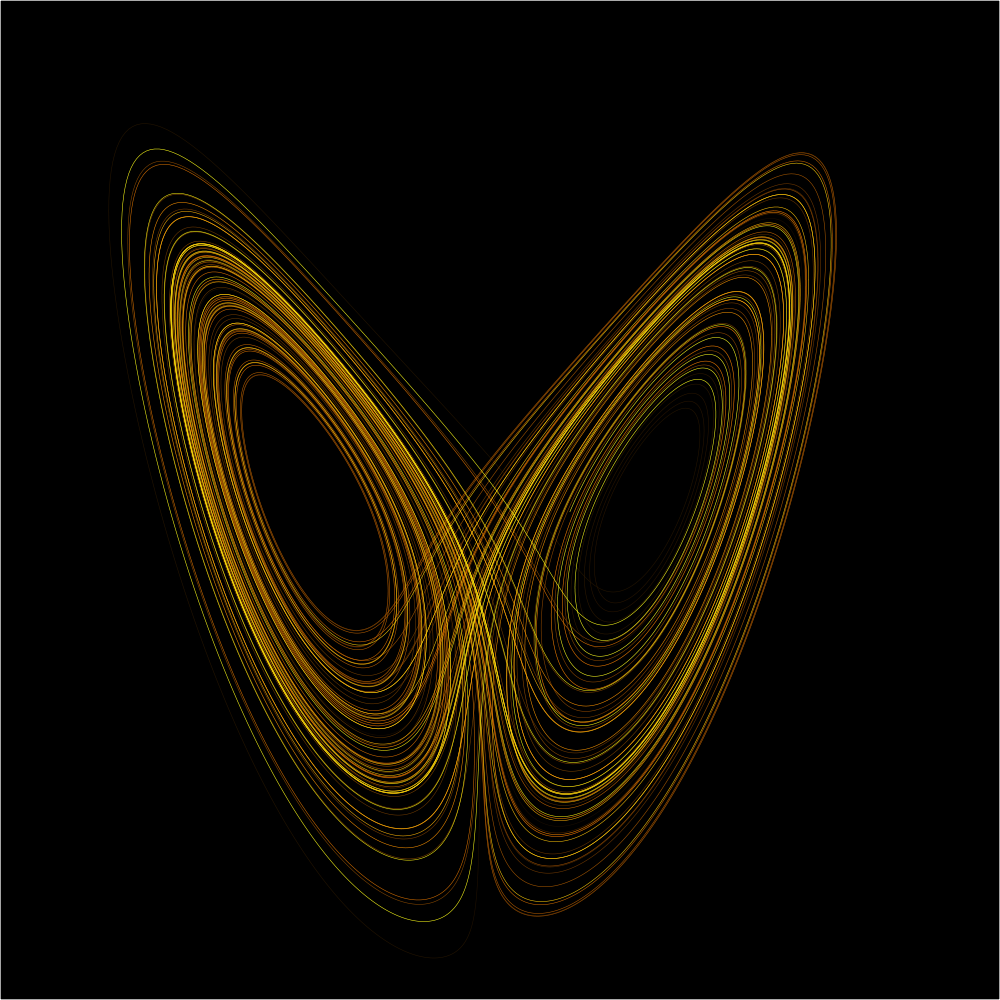 A new documentary produced by the BBC, called ‘The Secret Life of Chaos’ has attempted, with a degree of success, to reveal how the latest developments in science through ‘chaos theory’ are finally beginning to make redundant any religious explanation of the workings of the universe and the emergence of intelligent life.

It has done this by showing the necessary interrelation between order and chaos at all levels in matter. Indeed the understanding, or ‘philosophy’ underpinning this will be familiar to Marxists as it mirrors to an extent the Marxist method, the philosophy of dialectical materialism, which attempts to understand the movement and development of society with various principles such as the interrelation of opposites (hence the relation between order and chaos) and the dynamic, unceasing development of phenomena as complex systems based on countless interactions.

This fascinating documentary starts with the presenter, Professor Jim Al-Khalili, describing the mystery that the human body, responsible for so much, is 99% composed only of air, water, coal and chalk, with minute traces of iron, zinc, phosphorous and sulphur making up the rest. Indeed, if broken down into our elements each of us is worth only a few pounds. In other words, we are more than the sum of our parts, something that mechanical thinking, which treats objects as finished atoms that exist essentially independently of each other, cannot comprehend.

We then move on to the example of Alan Turing’s mathematical work in explaining mysterious ‘self organisation’, witnessed for example  when apparently homogenous objects such as the bundle of identical (or nearly identical) cells created after fertilization (known as a ‘morula’) suddenly differentiate into distinct kinds of cells.

How can this happen? How is it that, as Hegel, the philosophical precursor to Marx, would put it, we get difference through unity? Turing hypothesized that different chemicals seeping across an organism might interact with the cells to cause them to differentiate and behave in different ways.

Interestingly, in describing this, we are told that Turing compared this process with that of the formation of sand dunes through a ‘steady wind blowing across sand and creating all kinds of different shapes. The grains self-organise into ripples, waves and dunes even though all the grains are almost identical and have no knowledge of what is happening’. This technique of comparing completely different natural phenomena is important since the laws being described coincide with the laws of Dialectical Materialism. 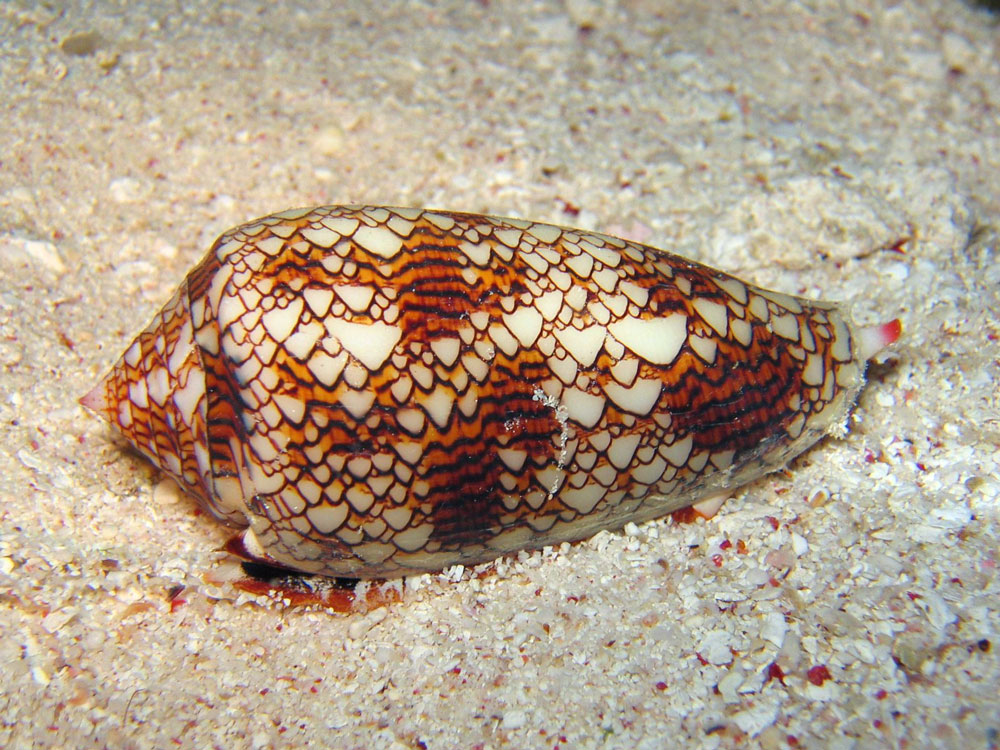 The pattern of this snail species resemble Wolfram's chaotic rule 30. Photo: Richard Ling In the development of an organism this process is known as morphogenesis. Crucially, as the presenter points out, this process appears to be governed by certain laws and to behave almost as with a pre-designed purpose. Yet there is no central control, no mind guiding the process.

In essence this is a discovery exploding the false and rigid dichotomy that has always been thought of as existing between apparently inanimate nature and the purposeful mind. Bourgeois philosophers have always considered the natural world as an inert and lawless chaos and it is precisely this  which has always required a god or outside cause to set the universe in motion and make it abide by set laws, which were falsely considered as fixed. Thus William Paley infamously inferred the necessary existence of god from the apparent order of the universe, making the analogy with the obvious conscious design behind a watch.

In particular, it was the problems caused by this world view in explaining the possibility of objective knowledge that led to Hegel’s discoveries of dialectical laws as immanent (i.e. coming from within) to phenomena themselves. For the rigid opposition, posed by philosophers such as Kant, between the mind as ordered and unified, and the natural, objective world as chaotic and random, led to the inability to explain the relation between ideas and the objects to which they were supposed to give order and purpose.

Indeed in considering this problem Schelling, who was Hegel’s roommate and philosophical precursor, brilliantly anticipated evolution and the idea of self-organisation within the natural world (i.e. independent of consciousness) 300 hundred years before this documentary was made: “there is an older delusion, which is that organisation and life are inexplicable by the principles of nature...it would be at least one step toward that explanation [of organisation in nature] if one could show that the succession of all organic beings had come about through the gradual evolution of one and the same organism.”

In other words it is the evolution or development of nature itself, resulting from the constant and extremely complex interaction of different aspects of nature, that allows us to speak of discernible regularity and predictable general laws applying across the spectrum, such as those governing morphogenesis and the creation of sand dunes. Here we see another dialectical principle in play – the unity of opposites, the emergence of simplicity through complexity and vice-versa.

The programme then delves into the problem of unpredictability existing within all natural systems (including human society). The presenter explains the problem that the mechanistic, Newtonian world view has in dealing with the unpredictability and change that scientists are inevitably confronted with. He uses the interesting example of an orary (a mechanical model of the solar system where the operator turns a wheel, which operates various cogs, moving models of the planets in a manner similar to how the real planets move) to depict this outdated worldview. 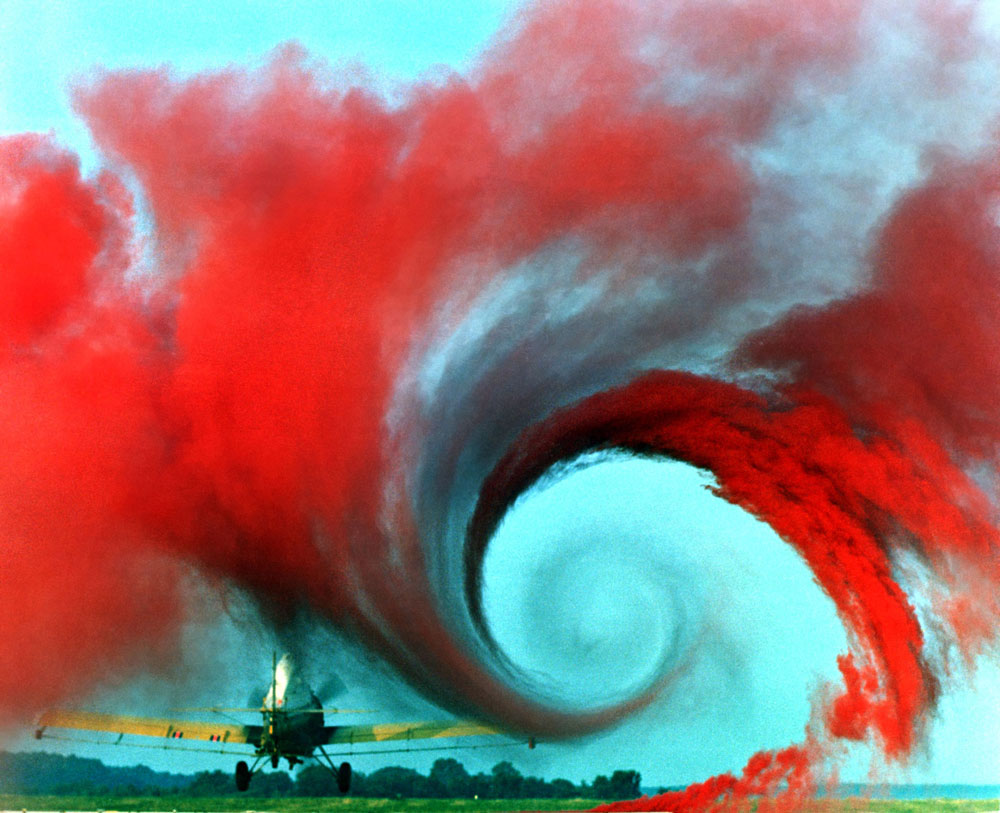 Vortex from the tip of an airplane. Photo: NASA The universe, like the orary, is seen as a complete system of fixed parts which always act on one another in the same way. However, there is a problem, which is that given enough time, real celestial bodies do not act upon one another in exactly the same way as before. The redundancy of this method is very clearly shown by the orary, which actually can only be put into operation with an external force – the human hand – and requires a complex system of cogs which are definitely not present in the real solar system! Similarly, the traditional view of the universe as obeying fixed patterns of behaviour always required an external stimulant – God – to set it in motion. As the programme explains, this model finally collapsed when it proved incapable of delivering results when being used to predict complex systems such as the weather.

The programme attempts to reconcile this complexity and unpredictability with the apparent order and regularity described earlier. Of course as we said, there is not total unpredictability in nature.  Everything occurs within definite conditions, so for example the apparently random interaction between each unique grain of sand and gust of wind contributing to the creation of a sand dune, actually occurs within definite limits, each sand grain being necessarily conditioned by the millions of other sand grains around it. Hence the more or less predictable sand dune formations resulting. The point is that we can predict the general appearance of sand dunes, although not the exact characteristics of each individual one. This principle is unconsciously utilised by everyone, indeed we could not survive without it, for example how could we recognise each human as unique and yet definitely a human akin to others without such a principle? We all know how each fingerprint is unique and yet all fingerprints look more or less the same.

The programme describes how infinitesimal differences in weather systems can produce huge changes in the outcome by way of a feedback effect – each minute change in output gets fed back into the system as an input, leading to a further change, and so on until a qualitative rupture is reached and new weather is produced.

However I would criticise the depiction of this law in the programme, where it is described as though the initial minute change, such as the famous example of the butterfly flapping its wings and giving rise to a hurricane elsewhere, is solely responsible for the dramatic alteration of the overall weather conditions. In reality, the small change is only able to have its effect preserved and developed due to a complex concatenation of circumstances favourable to changing the overall weather – in other words it is the ‘straw that breaks the camel’s back’. If we do not put it in this context, it would be a mystery as to how we would not have complete chaos in all phenomena whereby any and every minute change constantly leads to massive alterations in the whole system.

There is also a detectable note of philosophical idealism (i.e. the view that mind creates or determines matter) from the scientists in the programme, when explaining the unpredictability in systems arising because the ‘simple mathematical rules’ which apparently initiate the given process, are then diverged from as small discrepancies and deviations from ‘the norm’ develop into large ones. But then the question arises, where do these small divergences from the simple mathematic rule come from, and where does the mathematical rule that sets the system into motion come from? In reality, the maths only more or less roughly generalises the infinitely complex overall system of cause and effect that is nature.

That is the only way we can explain how the ‘rules’ which appear to govern reality, can be both changed or diverged from, but also returned to. Interestingly, the presenter sets up a feedback system, where a camera films him standing in front of a screen which is displaying, with a very slight delay, the image of the presenter being filmed by the camera. Because of the minor delay,  the image begins to diverge more and more from the original, until completely new patterns emerge of their own accord, as the image interacts with the different versions of itself. So the patterns that emerge are the concentration of all the interactions of the images projected with time lag, and the original event which is being filmed.

The principle behind this is extremely important for Marxists, because it shows how something arising from a definite base, and completely dependent upon that base, can through the constant interaction and feedback with its base, develop its own laws and become partially independent from its base. This is how we should understand, in the most general sense, human ideas, culture, politics and ideology, as dependent upon the material economic base of society (and ultimately nature as a whole), but developing its own logic which arises from contradictions in that material base and by constantly interacting with it. As Lenin said, politics is ‘concentrated economics’.

Just as all natural things must exhibit laws and organisation, so they enter into crisis, break apart and cease to exist. How many stars had to be born, only to explode, and how many planets had to collide, before the right conditions were developed for life? Similarly, a series of crises of capitalism inevitably leads the working class to the understanding that the system as a whole must go. The tendency to self-organisation in nature is only the basis for consciousness, which can reach perfection only in a liberated, socialist society, conscious of all of society’s needs.

If evolution led to consciousness, this was only because it must have been favourable in the conditions of nature to posses it. Similarly, Marxists can show how the conditions of capitalism and the class struggle make it favourable, even necessary, for the most advanced class created by capitalism, the working class, to have a fully conscious theory and leadership, embodied in the ideas of Marxism.