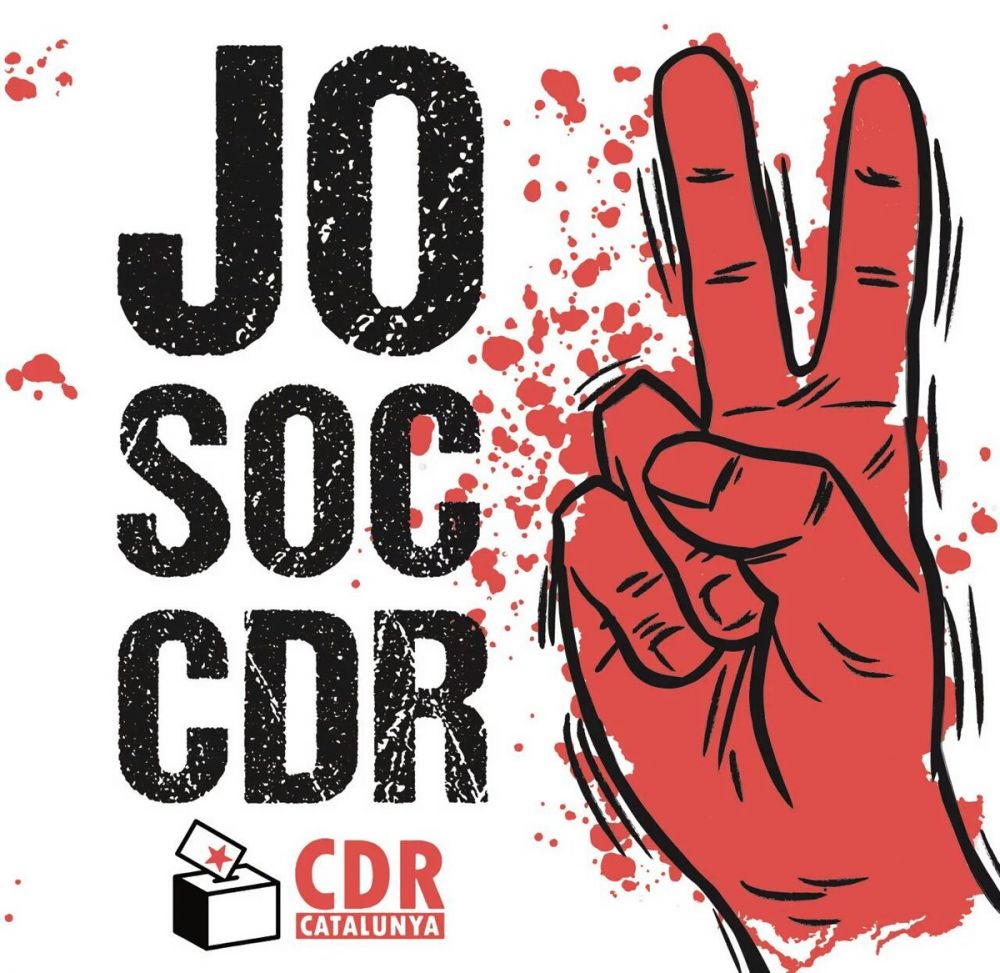 The Catalan Committees for the Defence of the Republic (CRDs) have come under a sustained campaign of criminalisation. The state prosecutor, the mass media and the political parties of the Spanish regime have all ganged up to brand them as “violent”, demanding that “action should be taken” against them and threatening them with prosecution for “rebellion”. Why are they so afraid of the CDRs?

The Committees for the Defence of the Referendum (as they were initially known) were set up in the run up to the 1 October independence referendum. They rapidly spread to towns, cities and neighbourhoods across Catalonia as committees of action undertaking the practical tasks of making sure the referendum would take place in the face of Spanish state repression. Sabadell (population 210,000), which is ruled by a broad coalition of left-wing and pro-independence parties, was at the forefront of developing the CDRs. Mass assemblies were called in each of the city’s five districts to create the Committees and then city-wide coordination was established.

The CDRs played a key role in organising the occupation and defence of the polling stations on 1 October and thus were crucial in allowing over 2m people to participate despite police repression. Afterwards they continued to organise, established national coordination and were the main driving force behind the 8 November general strike against repression, when they coordinated mass road and rail blockades across Catalonia, which lasted for most of the day. 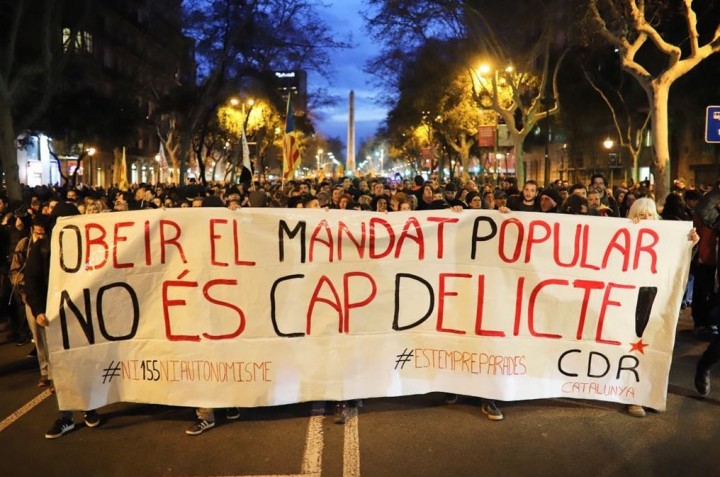 The CDRs played a key role in organising the defence of the polling stations on 1 October, allowing 2m people to participate in the referendum, despite police repression / Image: CUP, Sant Martí

Increasingly they became a more radical alternative to the main, pro-independence, mass organisations ANC and Omnium, which were seen as too moderate. On 30 January, with the failed investiture of Puigdemont, it was the CDRs which organised a mass protest that broke through police ranks and entered the perimeter of the Catalan Parliament. The protests against the visit of the Spanish king to Barcelona at the end of February where again coordinated by the CDRs.

In the protests that erupted over the jailing of a further five Catalan politicians on 23 March and the detention of Puigdemont in Germany on 25 March, the CDRs played a distinct role, calling for protests to march to the delegation of the Spanish government in Barcelona. They were subject to brutal police repression on the part of the Catalan Mossos, which left over 130 injured on both days. Those protests in Barcelona were combined with road and rail blockades in other parts of Catalonia, which continued over the next few days.

Over the long Easter bank holiday weekend, the CDRs changed their tactics and instead of blockading the main highways decided to open the toll booths instead, allowing motorists to pass free of charge, greeted by signs of “welcome to the Catalan Republic”. This was also a way of protesting against the system of handing over the motorways to private companies, which build them in exchange for a very profitable, long-term contract of exploitation of the toll booths.

The CDRs reflect the mounting frustration of a growing layer of the pro-independence movement, which sees the main parties (ERC and PDECAT) retreating in the face of Spanish government repression and abandoning any prospect of building a Catalan Republic. This contrasts very strongly with the feeling of “people’s power” that developed during the referendum and the 3 October general strike against repression. The idea of a new general strike, and this time not just a 24-hour action, is growing amongst the CDR activists. This is a very positive development. Increasingly, the ranks of the movement realise that they can rely only on their own forces. 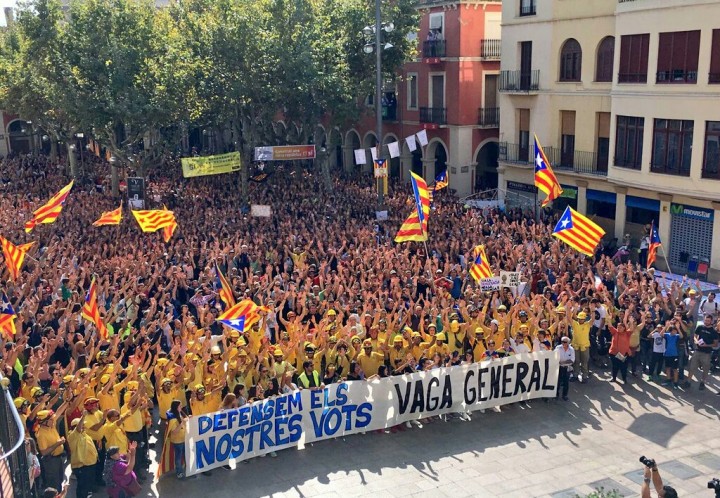 The idea of another general strike is growing among CDR activists on the ground / Image: CUP

There are also dangers in this situation, as a general strike is not something the CDRs can just decree at will. There is a tendency to think that a few thousand activists, by blockading roads and railways, can impose a paralysation of the economy. However, a general strike is based on the power workers have in a capitalist economy, and therefore, if one is organised such an action needs to be argued and fought for in the workplaces and factories.

It is precisely at this point, when the gulf between the rank-and-file and the leaders of the main pro-independence parties (ERC and PDECAT) is wider, that the state has launched a campaign of criminalisation of the CDRs. The leaders of ERC and PDECAT, under the hammer blows of Spanish state repression, have accepted that it is futile to defy the regime and have put the idea of a Catalan Republic on the back burner. The only obstacle to ‘normalisation’ – that is, the complete cessation of defiance to the 1978 Constitution – is the CDRs.

Thus, on 1 April, the State Prosecutor of the National Audience issued an incredible statement threatening the CDRs. The Spanish National Audience is a tribunal that deals with crimes against the state, and is a direct successor of the hated Franco-era Tribunal of Public Order (in turn a continuation of the Special Tribunal for the Repression of Masons and Communism). The statement is worth quoting at length. It describes the “intolerable actions” and “vandalic acts” of the “so-called CDRs” as “a threat not only to the public peace and constitutional order, but also to the very essence of the democratic system we are duty-bound to defend”. Remember that we are talking here about peaceful acts of civil disobedience, which according to the prosecutor are a threat to the whole “democratic system”! It makes one wonder how democratic the system really is.

The statement continues, pointing out that it will “continue its investigations to persecute these actions” as it cannot be “ignored…that their aim is the subversion of constitutional order protecting and extolling with violence persons who are being indicted with the highest crimes which can be committed against a Social and Democratic State of Right, as is rebellion”. It then threatens the CDRs that “such actions [that] could constitute a crime of rebellion, misuse of public funds and other crimes against public order will not be allowed”. In summary, peaceful mass civil disobedience is a danger to the state and those involved will be prosecuted for rebellion! Let us remember again that “rebellion” is a crime that involves a “violent uprising” against the state and carries a maximum sentences of 30 years in jail.

The statement is not only scandalous in itself but also twists the very Spanish legality it claims to defend. One thing is clear: the Spanish state sees the CDRs as a very serious danger and a threat, even thought, or precisely because, they have used peaceful mass methods of protest and are gathering support. 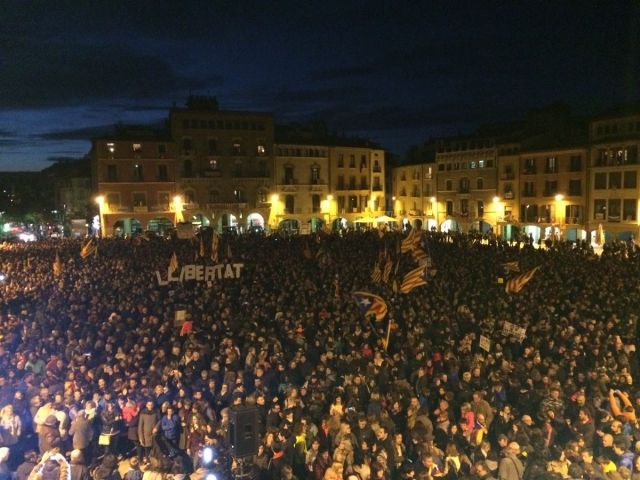 The Spanish state sees the CDRs as a very serious danger / Image: fair use

The threats of the prosecutor have been echoed by the mass media, which has exaggerated, twisted and even directly made up a series of incidents which ‘prove’ the CDRs are dangerous and violent. Politicians of all the ‘constitutional’ parties: PP, Ciudadanos and also PSOE, have lined up to demand “tough action” against the “violent CDRs”. This means they are worried. Scandalously, even Xavier Doménech, one of the main Catalan politicians linked to Podemos, joined this campaign. When asked by La Vanguardia whether he supported the actions of the CDRs, he answered: “the road that can lead to expressions of violent conflict I don’t think helps us. So no, I don’t.” Faced with a barrage of criticism he retracted his statement and said he was against the criminalisation of the CDRs. Barcelona Mayor Ada Colau, while clearly criticising the attempt to criminalise the CDRs added that their actions were damaging “Catalonia’s image”. In this case, United Left leader Alberto Garzon said clearly that what the CDRs are doing is peaceful civil disobedience that cannot be criminalised.

To back up these threats, the Guardia Civil has supplied the prosecutor with a farcical dossier on the CDRs, which consists mainly of press cuttings, a collection of public tweets made by the CDRs and a list of people who organised civil disobedience training workshops.

Of course, the growing instances of far-right violence in the last few months are of no concern to the prosecutor, nor the Spanish regime politicians, who have all completely ignored them.

These are not just idle threats. As well as the Catalan politicians jailed, in exile and indicted, there are dozens, if not hundreds of local activists who are being prosecuted and fined for their role in the referendum, the 3 October and 8 November strikes and road blockades and countless other protest actions. In Reus there is a case underway concerning “incitement to hatred”, involving dozens, for protests against the presence of the Spanish police. Catalan CUP member of parliament, Vidal Aragonés, will be sanctioned “for his leading role” in the road blockades in Cornellà during the 3 October general strike. In Tarragona, Girona and many other towns, activists, local CUP councillors and others are being summoned for their part in protests over the last six months.

The threats and repression by the state will not intimidate the movement, as it is their intention. The fact that the state is now targeting the CDRs shows what they are really afraid of: the rank-and-file, revolutionary organisation of the people. It also shows the way forward: strengthen the CDRs, spread them to factories and workplaces, give them the widest and most democratic character. As the CDRs said in a statement replying to these attempts to criminalise their actions: “they will not have enough jails for a peaceful people that is standing up in struggle,”