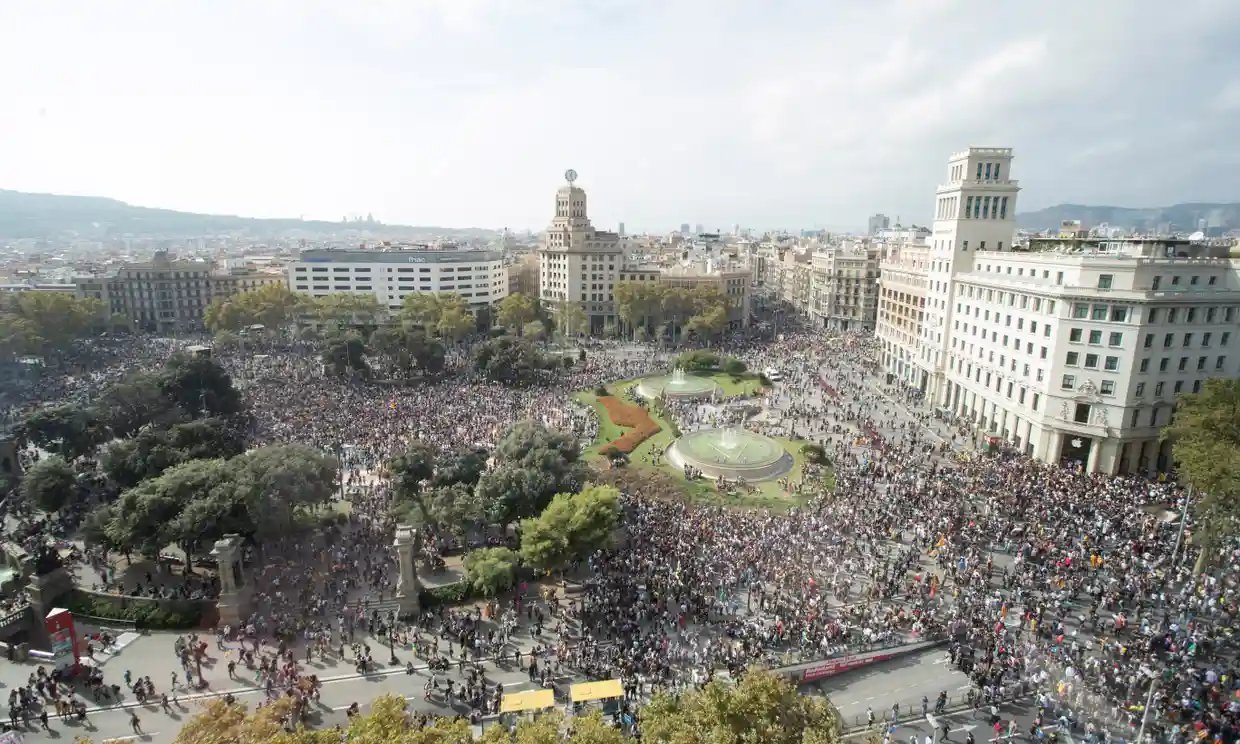 Yesterday, the Spanish Supreme Court issued sentences against twelve Catalan political prisoners involved in the October 2017 referendum, including nine former ministers, the speaker of the Catalan parliament, and two popular civil society leaders. The proceedings went on for almost two years, during which nine of them were held in pre-trial detention. As expected, the sentences were harsh: between nine and 13 years in jail for the nine held on remand, and fines and disqualification from public office for the other three.

They have been accused, among lesser offences, of sedition: a serious crime involving a “riotous” uprising against the state. Yet at no point did these leaders promote an uprising of any sort - in fact, when the 2017 movement reached an insurrectionary pitch they spared no effort to curb it. But this is not an ordinary court case - it is a political trial whereby the state wants to reassert its tarnished authority through an exemplary punishment.

The sentences triggered an immediate reaction by the Catalan masses, who took to the streets in large numbers. Although these protests were largely spontaneous, the Tsunami Democràtic united front provided general coordination. By midday, the centre of Barcelona had been paralysed as major roads were blocked (starting with the barricading of the Laietana thoroughfare by taxi drivers). Students left class as soon as the sentences were issued and joined the protests.

Tens of thousands gathered at the Barcelona airport, provoking over 100 flight cancellations and numerous delays. Police cut train and metro connections to the airport, but masses of people marched through the highway that connects it with the city. The police, both Spanish and Catalan, cracked down on the airport occupation with unprecedented brutality, using tear gas, rubber bullets (which are technically illegal in Catalonia), and stun devices. Police vans charged at protesters at high speed. A 22-year-old has lost his eye after being hit by a rubber bullet, and 131 people were injured.

In the city, there were clashes with police in the evening around the central Spanish police station. In other localities, roads, railways, and train stations were occupied or blocked. There were mass rallies in town squares across Catalonia. There were also large demonstrations in the rest of Spain, as the sentences generated an outcry among a significant section of Spanish society. In Madrid, protesters attempted to imitate Barcelona by blocking the access to the Barajas airport with over a thousand cars.

The whip of reaction has given a powerful boost to the Catalan republican movement. The day-long occupation of one of Europe’s largest airports is a taste of what can be achieved through mass mobilisation. After months of downswing in republican protest, the masses have now flexed their muscles and recovered their confidence. The sentences have not only angered out-and-out secessionists, but also many unionist democrats - in Catalonia and beyond.

The insurrectionary traditions of October 2017 are coming to surface again with force (enriched by the international experience of the gilets jaunes, Hong Kong, Ecuador, etc, which has not gone unnoticed). A general strike has been called on Friday, and mass demonstrations, student strikes, and protests are scheduled during the week. This evening, the organisations around the CUP (Popular Unity Lists), the far left of the pro-independence movement, have called for rallies against the repression at the airport. These mobilisations should be developed through mass assemblies and committees of struggle. Already we see the embryos of such organs of grassroots organisation. 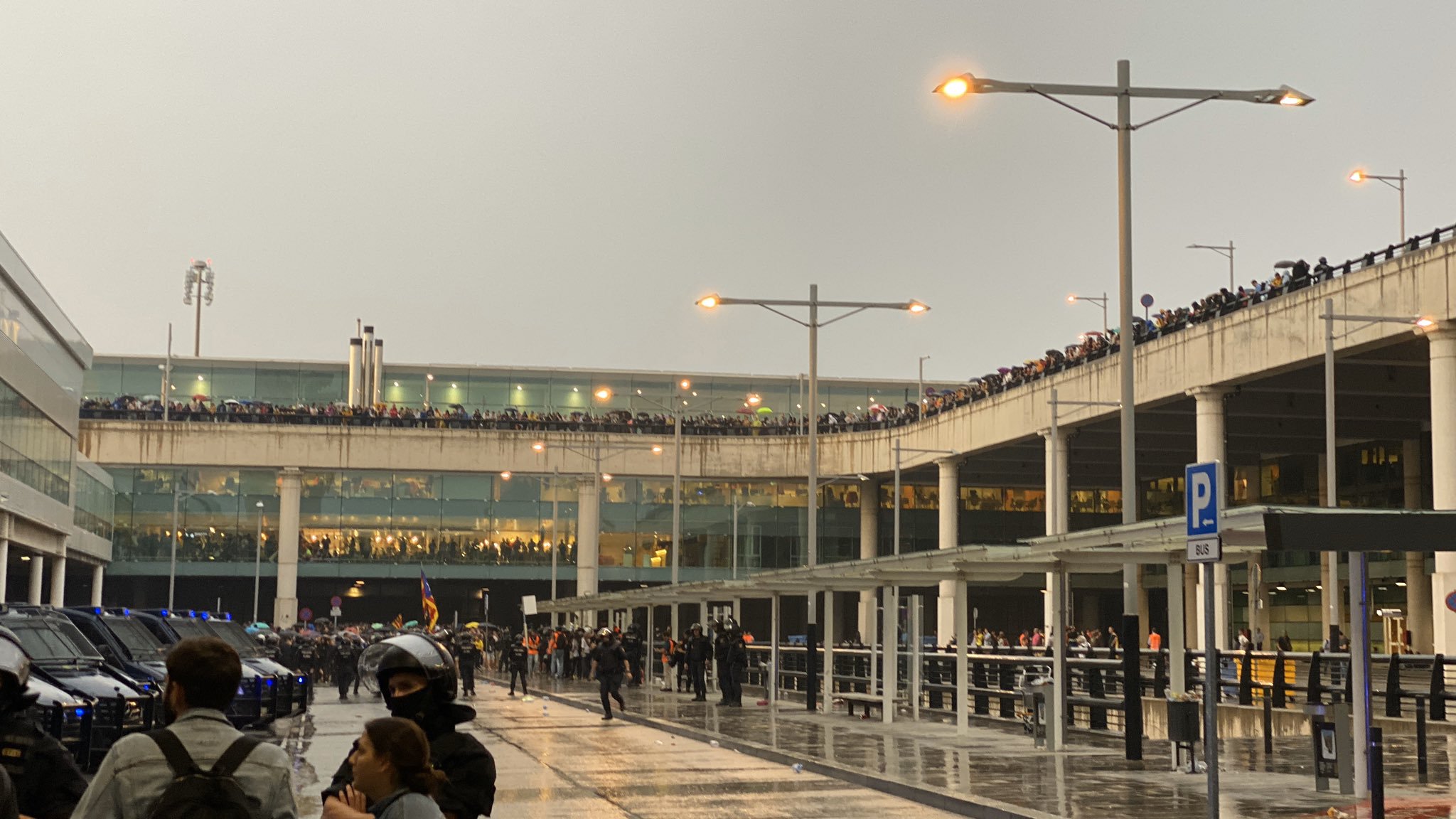 Tens of thousands gathered at the Barcelona airport, provoking over 100 flight cancellations / Image: fair use

The basic shortcoming of the October 2017 movement, however, has not been resolved: the absence of a revolutionary leadership that can lead the movement to victory. The same petty-bourgeois nationalists that derailed the 2017 referendum remain at the head of the movement today - now even more disoriented and frightened than two years ago. Indeed, as they rue the sentences, the Catalan government has called for “dialogue and negotiation” with the state, and threw the Catalan police at the protesters at the airport yesterday.

With one hand, they wave the Catalan flag, and with the other, the truncheon with which they beat the youth fighting for the most basic democratic rights. In Spain, the right to self determination, along with other major democratic demands, is a revolutionary task that cannot be delivered by petty-bourgeois politicians afraid of their own shadow. The task is to use this movement to build a new revolutionary leadership in the heat of the struggle. It behoves the CUP to take up this responsibility, by clearly explaining among the insurgent masses the limitations of the current republican leadership, linking these shortcomings to their class character, and proposing a political alternative.

In practical terms, it is necessary to stimulate the formation of grassroots committees of struggle, instil them with a programme for radical social transformation, and centralise them through the election of delegates and of an all-Catalan committee. This can become the revolutionary bastion the movement needs to triumph.