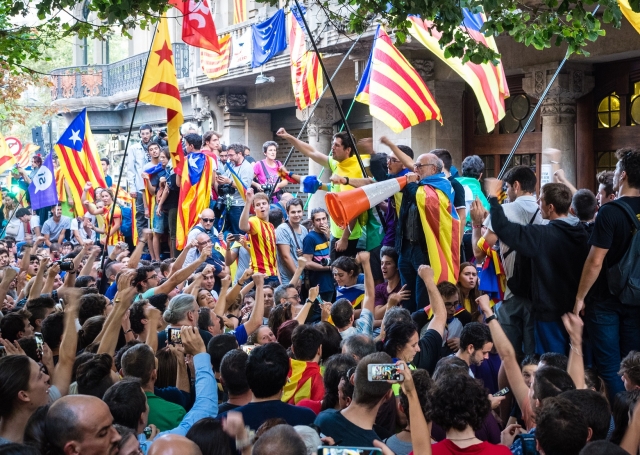 Jorge Martin reports on how the arrest of two Catalan officials has reignited the mass movement for independence. The whip of oppression wielded by the Spanish state has driven the masses back into action, the mood is incendiary, and Puigdemont has been left little room for maneuver.

It was just after 9:20pm, local time, when the news was announced. The leaders of the Catalan National Assembly (ANC), Jordi Sánchez, and the Òmnium Cultural (a Catalan culture promotion institution), Jordi Cuixart, were being held without bail on the order of the National Audience judge. What followed was an explosion of anger. People shared the news on WhatsApp groups. Pre-recorded video messages from the Jordis were released and went viral. People started coming out on the streets and leaning out of their balconies and windows banging pots and pans across Catalonia. They were joined by firefighters blasting fire engine sirens.

The case is a graphic demonstration of what the 1978 regime means. The Jordis, together with Catalan police Mossos major, Trapero (who was given conditional release but had his passport withdrawn), are being tried by the National Audience in Madrid: a tribunal which is the direct continuation of the hated Francoist Tribunal de Órden Público, and that tries crimes against the state.

The Jordis are accused of "sedition" and conspiracy to commit it: a crime that has been taken without any amendments from the Franco era penal code. It is described as a "riotous mob" preventing the action of agents of the law and carries sentences of up to 12 years in jail. 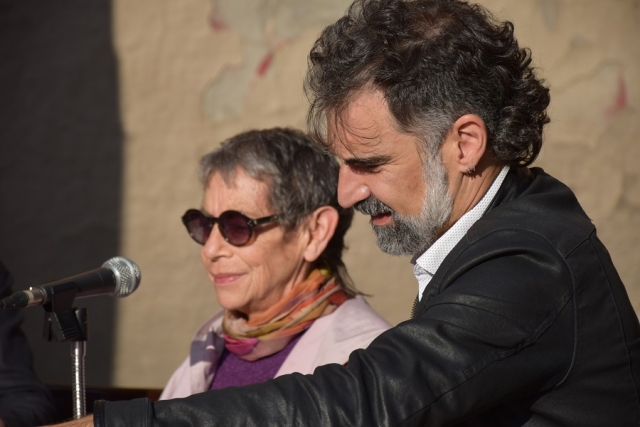 The judge trying this case is the same who has jailed a number of youth from the Basque town of Alsasua for what in effect was no more than a bar-brawl. The judge deemed it a crime of terrorism, even though ETA has abandoned the armed struggle and given up its weapons. Two of the Alsasua youth have already spent a whole year in jail. The prosecutor asks for a 50 year sentence.

To add insult to injury, Arsenio Escolar, a respected journalist, claims to have overheard talk of the detention without bail of the two Jordis during the King's reception on Spain's National day on 12 October. This would imply that the decision is openly political and reveals the lie of the "separation of powers" in bourgeois democracy.

What are the facts that motivate this court case? On 20 September, the Civil Guard, acting on orders from the state prosecutor and the judge, arrested a number of high ranking officials of the Catalan government in early morning raids on their homes or while on their way to work. This was part of attempts by the Spanish state to disrupt the logistics of the 1 October Independence referendum. The Civil Guard also entered a number of Catalan government buildings in the centre of Barcelona in order to seize computers and documents.

Immediately there was a call for demonstrations, which centred around Catalan government buildings in Via Laietana and above all at the Economy Department (Conselleria d'Economia) in Passeig de Gràcia. Over the course of the day, the crowd at the Conselleria grew in number until it reached 40,000 in the late afternoon as people started leaving work and joining the protest. A huge banner read: "Welcome to the Catalan Republic".

The people were determined to resist the actions of the Civil Guard and defend the Catalan institutions. There had been a call issued by the ANC but clearly the rally was largely spontaneous and ANC volunteers struggled to keep control over it. A few Civil Guards and court officials were inside the building and the "riotous mob" was in no mood to let them out.

The hours went by and the crowd fought back attempts by Catalan police Mossos riot units to open a corridor to allow people inside the building to leave.

Around midnight, volunteers of the ANC attempted to open a corridor and ANC leaders called on those present to go back home. The crowd shouted back: "you go, we'll stay" and to the Civil Guards: "tonight you are leaving without your car". The crowd had covered the Civil Guard vehicles in stickers and stood on top of them to get a better view of the action. The tyres had been slashed.

The whole scene was a humiliation for the Civil Guards, who only managed to leave in the early hours of the following day, when the crowd had mostly left, about 22 hours after they entered the building. The mood had been electric, insurrectionary and the masses got a taste of their power. Lessons were absorbed which were then put to good use in the preparation of the 1 October referendum, when thousands occupied schools and high schools over the weekend and hundreds of thousands joined them from 5am on polling day to defend the polling stations against the brutal police repression.

Reading the state prosecutor's case for sedition, one can feel the impotence the "agents of the law" felt during those long hours, when the street had taken over and decided not to let them out. A court official had to leave through the roof of the building. Civil Guard vehicles had to be towed the day after.

The Spanish state could never allow such events to go unpunished. The restoration of Spanish legality also means meting our punishment for those who dared to prevent bourgeois order from being applied. In this case they chose to prosecute those they think were the ringleaders, to scare the others off.

The two Jordis lead the two organisations that have called and organised the largest rallies Catalonia has seen in the last few years, gathering between one and two million people at each Catalan National Day on Sept 11. Prosecuting them is not a mistake nor an irresponsibility. It has been done with a purpose: showing the riotous mob (multitud tumultuaria) who's boss.

However, this will backfire, spectacularly. It already has.

The mood in Catalonia is one of anger – more than that – of hatred for the 1978 regime and all it represents. In the last few days, divisions and cracks have appeared in the independence camp and amongst the defenders of self-determination. Doubts, hesitation. Now everyone is united again in condemnation. Even those who have insisted that the way forward is via negotiations (like the Comuns of Barcelona mayor, Ada Colau) are now outraged at the actions of the National Audience judge.

To hold someone without bail for the crime of calling a peaceful demonstration, in a country that has seen prominent politicians and businessmen involved in corruption scandals go free, and the King's brother-in-law indicted for corruption and subsequently released without bail, adds to the feeling of injustice.

If, as it is expected, the Spanish state applies Article 155 on Thursday or Friday after the deadline expires, that would pour even more petrol onto the flames.

The banging of pots and pans tonight (a form of protest that has been going on non-stop since the events of 20 September) has been particularly loud and long-lasting, in some cases up to 45 minutes. People were not just staying home and making noise through their balconies but came out and joined their neighbours in the streets below.

In Girona, thousands have marched to the local police station led by the local mayor.

In Barcelona a few hundred have gathered in St. Jaume Square and shouted slogans for a general strike. In other places small groups of people have gathered in town squares or blockaded local roads. This is only a small foretaste of what will happen tomorrow.

Already protests have been called for Tuesday, 17 October. At noon there is a call for work stoppages and rallies outside workplaces. At 7pm, candlelit demos (originally called by the ANC as a series of silent demonstrations) will take place outside the delegations of the Spanish government in each of the four Catalan provinces. Student organisations have also called for strikes and rallies in each of the university campuses at noon.

The stage is set for a new upsurge of the mass movement, which will certainly surpass the limits of the official institutions and also those of organisations like the ANC (as happened on 1 October).

The Committees for the Defence of the Referendum, which had their first national gathering on Saturday, are already playing a more proactive role in the mobilisation. In many towns and neighbourhoods they've called for mass assemblies to take place prior to the 7pm demos. There is talk of preparing a general strike starting on Wednesday. The relative calm of the mass movement, which had retreated from the streets after the national stoppage of 3 October, allowed the Catalan government to retreat and slowly but surely move down the slippery slope of negotiation and compromise. The whip of the Spanish state repression has now brought the masses on to the stage again, greatly diminishing any room for manoeuvre on the part of Puigdemont.

On 16 October, thousands took to the streets of Galicia, and there were solidarity rallies elsewhere, in Barcelona, Madrid and so forth. They were protesting those responsible by action or omission for the dreadful wave of wildfires that have affected Galicia and neighbouring regions. They demanded the resignation of Galician president Feijóo, from the PP. Another front has opened for the weak and unstable government of Rajoy.

The slogans of the hour are:

- Freedom for the Jordis #JordisLlibertat!

- All out on the streets: mass assemblies, rallies, work stoppages!

- Strengthen and expand the CDRs: link them up nationally to give the movement a democratic structure and accountable leadership!

- Prepare a general strike to declare the Catalan Republic!

- Only the people saves the people, trust no-one but your own forces!

- Make an appeal for solidarity to the working class of the rest of Spain: bring down the hated Rajoy government!