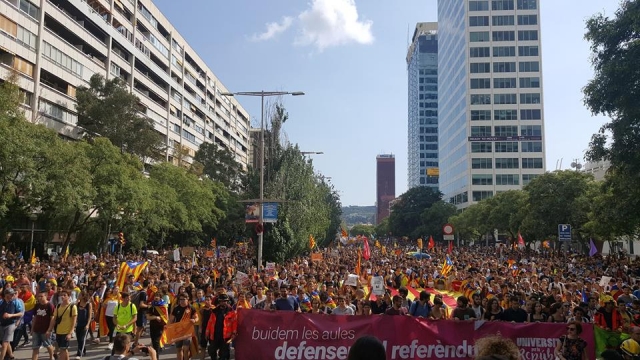 The moment that hundreds of uniformed Barcelona firefighters joined the 90,000 -strong student demonstration in Barcelona is an indication of the level of class conflict developing in Catalonia. These scenes are reminiscent of other periods in history, such as May 1968 when the workers and students came together.

The demonstration was in defence of the October 1st independence referendum and for a Catalan republic. [see video by Arran Poblenou below]

Earlier this week a mass meeting of Barcelona firefighters had agreed to reject threats from Barcelona council not to get involved in demonstrations and not to hang banners from fire stations, while offering their services to guarantee the security of polling stations on Sunday, as the Spanish state has instructed police to seal any buildings that might be used as such.

In many instances Civil Guards and other police have gone to schools and high schools to question the headmasters and take a statement from them, telling them in no uncertain terms that they are responsible for the keys of the building and there will be legal consequences if the building is opened on Sunday.

Instructions to the police about sealing potential polling stations are very specific. The seal must be highly visible and be accompanied by a note warning of criminal proceedings against anyone breaking it.

In the rally at the beginning of the student demonstration, a member of Arran (the CUP-linked youth organisation) issued a call to build a "free, communist and feminist Catalonia", while a representative of the ERC youth called for a "republic at the service of the people", while a third speaker declared "we will vote to smash the fascist 1978 regime".

Faced with the decision of the Catalan Supreme Court of Justice to instruct police officers (including Catalan Mossos) to seal any buildings which could be used as polling stations (mainly schools and high schools) a mass movement has developed.

The peasants' assembly (as we previously reported) has declared that they will go to polling stations ahead of Oct 1 and park their tractors outside, to guarantee they are open on the day. A mass movement of teachers, parents and students is being organised to occupy schools and high schools from tonight to keep them open. In neighbourhoods across Catalonia, Referendum Defence Committees have been set up to organise the logistics of defending the polling stations. In Sabadell, Catalonia's 5th largest city, with a CUP mayor, mass meetings have been taking place in all neighbourhoods to organise the defence of polling stations.

The situation in Sabadell (population 200,000) just outside Barcelona is indicative of the mood.  The Referendum Defence Committee is holding 7 mass meetings across the city to organise the defence of polling stations for Sunday's Catalan independence referendum.

Thousands have turned up to the meetings in which detailed plans have been worked out. After a general discussion those present have broken down into groups, one for each polling station. In most cases these are located in schools and high schools. The plan is to organise all sorts of activities (cultural, sports, cinema...) in the schools from Friday at the end of the school day right until Sunday at polling station opening time. Parents, teachers and students, as well as concerned neighbours, will spend all that time in the schools making thus sure they stay open.

This is the response to the orders to the police that they have to seal all buildings which could be used as polling stations.

The stage is set for a massive confrontation between a growing movement from below for democracy and self-determination and the reactionary Spanish state which is using all means at its disposal to physically stop the referendum from taking place.