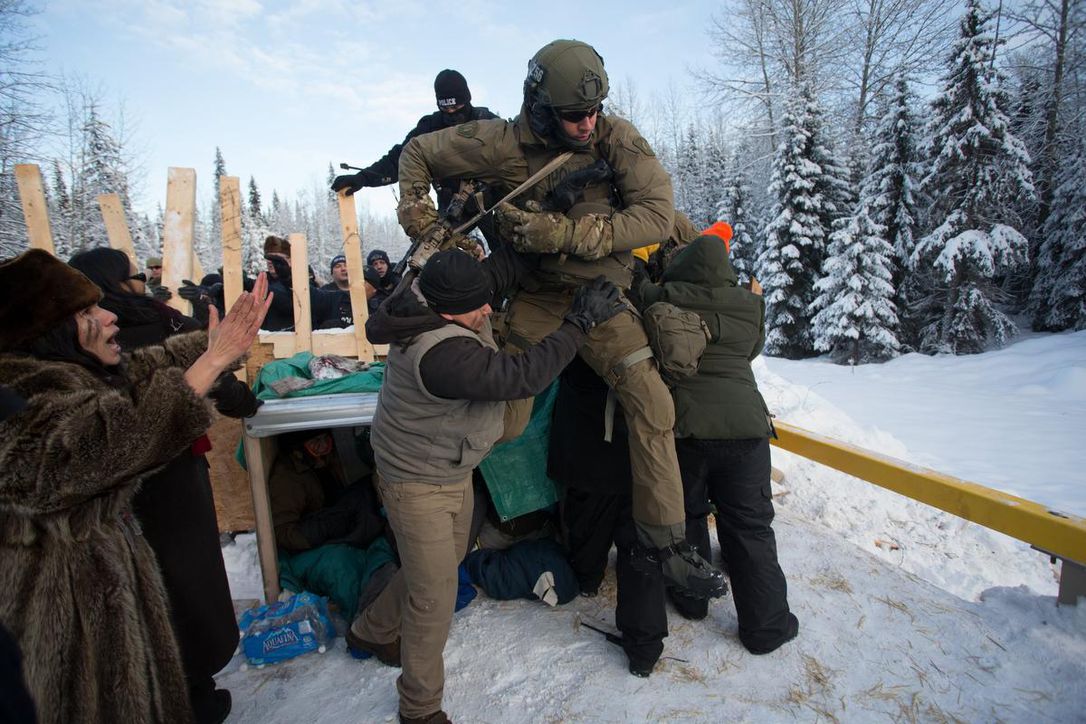 The full weight of the Canadian state is coming down on the Indigenous people of the Wet’suwet’en Nation in northern British Columbia, along with their supporters. On Jan. 13, the Royal Canadian Mounted Police (RCMP) began their attack by setting up a roadblock on Wet’suwet’en territory, blocking the entrance for the population of the territory, the media, and food supplies. The Canadian government sent them to defend an injunction prohibiting interference with the construction of the Coastal GasLink pipeline on unceded Wet’suwet’en territory. The situation escalated on Feb. 6 when the RCMP raided one of the land defenders’ camps, arresting six Indigenous activists. At the time of writing, 21 people have been arrested.

The reason the federal and provincial governments are so keen to see this project through to completion is that the construction of the pipeline is part of the largest private investment in Canadian history – amounting to $40 billion. Justin Trudeau’s hypocritical rhetoric about “reconciliation” with Indigenous peoples is belied by his defence of corporate interests with the support of the state apparatus.

Even the provincial NDP has shamefully capitulated to these interests, claiming that the pipeline will be built despite Indigenous opposition. Premier John Horgan starkly summarized his position on Jan. 13: “The rule of law applies in British Columbia.” This is an outrageous statement, coming just weeks after the NDP government enshrined the UN Declaration on the Rights of Indigenous Peoples (UNDRIP) in law! UNDRIP was adopted by the United Nations in 2007, and emphasizes the concept of “free, prior and informed consent” for activity on Indigenous territory. What we see here is that as long as we remain under an economic system dominated by private interests, the application of the principles of UNDRIP is not possible.

How far the state is prepared to go against Indigenous peoples was explained last December by the British newspaper The Guardian. It revealed that the RCMP was ready to deploy snipers and shoot Indigenous activists to crush opposition to the gas project when it invaded their territory in Jan. 2019. What we have here is the racist and repressive essence of the Canadian state, without the filter of Liberal-style “reconciliation”.

However, the heroic resistance of the Wet’suwet’en continues, and a solidarity movement is growing across Canada. CN Rail trains were blocked between Prince Rupert and Prince George in British Columbia. In Ontario, Mohawk activists blocked VIA Rail trains between Toronto and Montreal, despite an injunction to clear them. And service on the commuter train line exo4 in Candiac, Quebec, is currently interrupted due to the presence of protesters near the tracks. Solidarity demonstrations are taking place across the country. We would have to go back to the Idle No More movement of 2013 to see a comparable movement for Indigenous rights in Canada.

Activists have also begun to strike where it hurts the capitalists: their profits. Since Feb. 9, activists from the Red Braid Alliance for Decolonial Socialism have organized a blockade of the Deltaport in Vancouver. As of the morning of February 10, at least 33 people were arrested and the port has been reopened, following an injunction obtained by the company.

The group that organized the blockade said, “More than $1 billion of commerce moves through Deltaport every year. We’re shutting it all down. There’s no commercial traffic going in or out of Deltaport today.” It also appears that workers support the blockade. Representatives of International Longshore and Warehouse Union Local 502, which represents 300 workers at the port, approached the barricades with a message of solidarity and said they would not cross the picket line. Workers’ solidarity is the key to victory!

A port representative stated that, “The disruption to port operations over the past four days has had a significant impact on Canadians across the country.” By “Canadians across the country” she means first and foremost the interests of big business in the country – and that is precisely what the movement must aim for. Only the threat of a united working class movement can force the Canadian state to back down. The Wet’suwet’en struggle must extend to the broader working class if it is to succeed.

This conflict exposes the role of the Canadian state. The state and its police and courts are ultimately a tool at the service of big business, designed to quell any resistance to their interests. The correct attitude to adopt in the face of the decisions of the capitalist courts has been summed up by the activists who are blocking the railroad between Montreal and Toronto:

In regards to the ‘Injunction’ served on the people of Tyendinaga, We the people refuse to have your laws imposed upon us. We have, and have always had our own laws and customs, prior to, during and thereafter your attempts at genocide and assimilation. A paper ordering us to vacate our land, and or allow passage of foreign goods through our territory is meaningless. We will stand our ground, and as stated, not leave until the RCMP pull out of Wet’suwet’en traditional territories.

In this fight between the capitalists, their courts and police, and the Indigenous people of Wet’suwet’en, Fightback offers its full support to the resistance. This struggle comes at a time when workers at the Co-op refinery in Regina are also suffering state repression to protect the interests of the oil barons. For all the workers and the oppressed, Indigenous and non-Indigenous, the enemy is the same – the bosses, their government and their state.

For workers’ solidarity with the indigenous people of Wet’suwet’en!