The Canadian occupation of Afghanistan is on its last legs. Richard Colvin’s testimony, admitting that Canadian soldiers were complicit in the torture of prisoners, is the finishing touch. 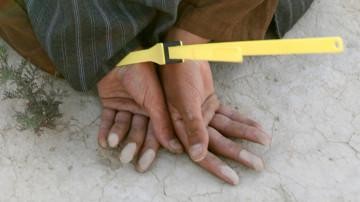 The Canadian occupation of Afghanistan is on its last legs. After eight years, the Canadian state and the corporate media have failed in their attempt to convince ordinary Canadians of the benevolence of Canadian imperialism.

Despite all of the feel-good stories of Canadian soldiers opening up Tim Hortons and playing pick-up hockey in Kandahar, Canadians have become fed up with the nasty truths coming out of Afghanistan—from propping up the corrupt Karzai government that legalized rape, to the ever-growing number of bodies coming back to Canada. Richard Colvin’s testimony, admitting that Canadian soldiers were complicit in the torture of prisoners (with the knowledge of the Prime Minister’s Office), is the finishing touch.

Testifying at a parliamentary committee investigating the mission in Afghanistan, Colvin admitted that up until 2007, all of the prisoners captured by Canadian soldiers were likely tortured after being handed over to Afghan authorities. Colvin went on to say that most of these detainees were probably innocent: “They were picked up ... during routine military operations, and on the basis typically not of intelligence [reports] but suspicion or unproven denunciation.” Furthermore, Colvin stated that most of the detainees were not “high-value targets,” those actually responsible for the Afghan resistance. Colvin said, “Many were just local people: farmers; truck drivers; tailors, peasants – random human beings in the wrong place at the wrong time.”

The Canadian mission was very much aware of the fate of Afghan prisoners, even those that were innocent. “According to our information, the likelihood is that all the Afghans we handed over were tortured. For interrogators in Kandahar, it was standard operating procedure,” said Colvin. This knowledge wasn’t just limited to the Canadians; the Red Cross was also aware of the torture going on and the fact that Canada was directly involved in handing over detainees to face torture. Colvin testified that throughout 2006, the Red Cross routinely attempted to contact the Canadian mission in Kandahar but “the Canadian Forces in Kandahar wouldn't even take their phone calls.”

Perhaps the most damning part of Colvin’s testimony was the effect the occupation was having in Afghanistan. According to Colvin, the actions of the Canadian military mission effectively ended up being a recruiting tool for the Taliban. “In Kandahar, Canada needs to convince local people that we are better than the Taliban, that our values were superior, that we would look after their interests and protect them. In my judgment, some of our actions in Kandahar, including complicity in torture, turned local people against us. Instead of winning hearts and minds, we caused Kandaharis to fear the foreigners. Canada's detainee practices alienated us from the population and strengthened the insurgency.”

The hypocrisy of the Afghan mission has been made very clear for Canadians. For years, the government, the bosses, and their allies in the corporate media have tried to convince us that Canada was in Afghanistan for a greater good—to try to bring freedom and democracy to the Afghan people, and to improve their lives. Instead, increasingly we are being told of the real truths coming out of Afghanistan. Instead of helping the Afghan people, the Canadian mission ruined the lives of thousands. In a perverted sense of accomplishment, Colvin also noted that Canadian soldiers were particularly adept at handing people over for torture, admitting that Canada captured six times as many people as the British, and 20 times more than the Dutch.

The Conservative government is desperately trying to salvage the prestige of the occupation of Afghanistan and trying to backtrack on a promise to remove Canadian troops by 2011. Even though Colvin said that the PMO would have certainly been briefed on the tortures occurring in Afghanistan, Prime Minister Stephen Harper and Defence Minister Peter MacKay continue to deny that anything wrong happened in Afghanistan. The government, instead, is turning on Colvin! Conservative MPs have suggested that Colvin is lying for propaganda purposes. Conservative MP Jim Abbot said, “Out of 5,000 Canadians who have travelled through there, at least in that period of time, you were the one single person who is coming forward with this information. So you will forgive me if I am skeptical.” However, the real kicker came from Tory MP Cheryl Gallant who blamed Colvin for reducing public support for the occupation of Afghanistan: “The fanning of the fames of outrage over allegations [of torture], however unproven, are really having the desired effect on the Canadian people of wanting our troops to return even quicker.”

From the very beginning, we stated that the Taliban could never be defeated on the basis of a foreign invasion. A foreign occupation of Afghanistan would be the best recruiting tool for the Taliban. We also stated that the so-called “superior morality” of the Western military was a lie. Canadian and allied imperialism is prepared to go to any length to gain profits, as these reports of torture show. The real basis for freedom and liberation for working-class and peasant Afghans is through a common struggle with their counterparts all over the Middle East and Indian sub-continent.

The invasion of Afghanistan was never about freedom and democracy. The imperialist powers (including Canada) wanted to secure the region for their own interests. The bosses are desperately trying to salvage something from this disaster but it is too late—there is no support, neither in Afghanistan nor Canada.