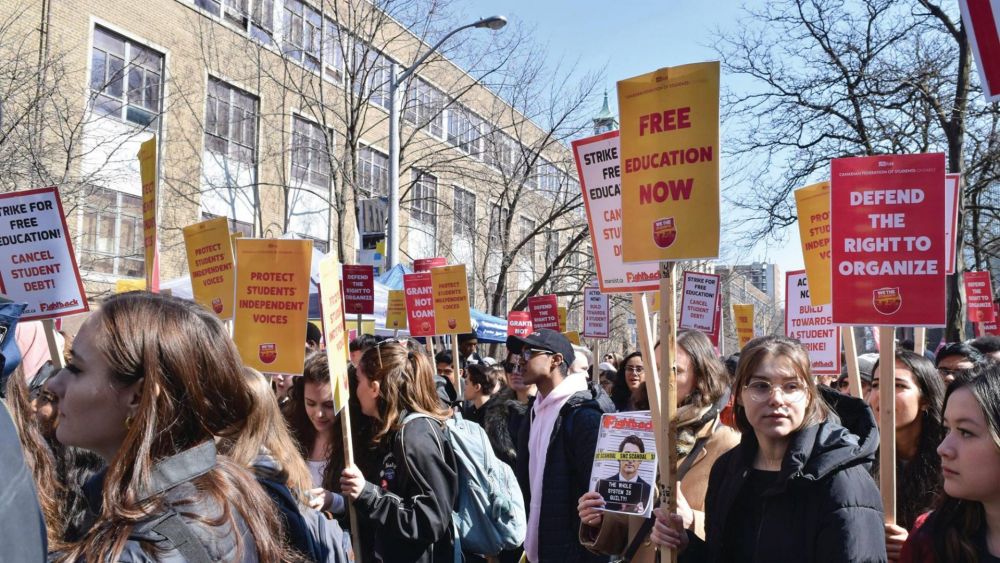 This month, students in Ontario, Canada return to school in an incredibly desperate situation, thanks to Premier Doug Ford.

Since the government announced its post-secondary education overhaul in January, it has cut deep into programmes that make post-secondary education possible for many youth. The Ford government eliminated grants for low-income students as well as the six-month post-graduation grace period on student loan interest. The government also cut school budgets and imposed “right to work”-style policies on student unions to undermine opposition.

Ford’s attacks amount to more than $600 million in cuts to post-secondary education spending. With OSAP grants cut, debt piling up, and no grace period to pay back loans, students will be struggling more than ever to make ends meet.

These cuts were met with enormous anger and outrage. Students showed that they will not accept these attacks without a fight. Soon after the cuts were announced, thousands of students walked out of class and marched on the provincial legislature chanting “Fuck Ford!” and “Free education now!”

The momentum pushed the Canadian Federation of Students-Ontario (CFS-O) to vote to draft a plan for a student strike. The draft was to be discussed at the federation’s summer meeting, with the 2012 Quebec student strike as a model.

As has been confirmed again and again, lobbying and asking right-wing governments to kindly spare students the pain of austerity is a dead end. These governments only listen to the rich, and the rich demand more for themselves while demanding cuts to programmes assisting the youth, workers and the poor. This has the added benefit for the ruling class that it keeps many workers and oppressed people too indebted and scared to stand up for themselves. Only a bold and organised response can provide an outlet for this discontent and stop these cuts.

In March, students showed that they were ready to fight Ford by staging a series of walkouts. This included rallies at York University, the University of Toronto, OCAD and Ryerson. Socialist Fightback Students helped to organise many of these walkouts, particularly at Ryerson, where nearly 2,000 students rallied, demanding a student strike for free education.

Now that students are returning to school and facing the full force of the cuts, there is real momentum for a student strike. At the annual general meeting of the Ryerson student union a resolution was passed calling for general assemblies to organise a student strike. Activists with Fightback were instrumental in promoting this resolution. Now a Ryerson General Assembly will be held on 25 September to provide a democratic forum to discuss and make plans for a student strike.

At the same time as the movement is heating up at Ryerson, there are talks about a student strike at York University in early November. It is vital to unite these efforts to create the maximum impact and make every effort to spread the movement to as many campuses as possible.

For such a strike to be successful, it cannot be organised over the heads of the mass of students. Students should know a strike is coming, have full democratic control from the bottom up, and they need to be mobilised ahead of time. Ideally, this would mean involving students in planning the strike through democratic assemblies, as was done ahead of the Quebec student strike. The best way to harness and direct the burning anger of the province’s youth is to allow them to take hold of the fight themselves through mass, democratic channels.

Given that it has been a long time since students were mobilised in this way, some may worry about the risks involved in calling a student strike. The last student strike in English Canada was in 1996, so these are skills that have to be re-learned. However, the Quebec student movement provides significant lessons. The fact that Quebec students habitually go on strike is the very reason why Quebec has the lowest tuition fees in the country. Furthermore, there are no laws that can declare a “student strike” illegal in Canada—how could they make it illegal to not attend a class? Students on strike set up pickets and simply ask other students and campus workers to respect such a picket. Unionised campus workers cannot be forced to cross a picket line.

Additionally, in nearly all recent student walkouts, student organisations have won the right to academic clemency, so no one is penalised for missing classes. The same was done during the CUPE 3903 strike at York University, which lasted for several months. There is no reason why this could not be won in the case of a student strike.

Furthermore, should students take up the fight against Ford, they will not be alone. After only a year in government, Ford has become one of the most despised premiers in the history of the province. He has attacked the mass of the population again and again, with cuts to rent control, income support, high schools, and much more. Students could be the first to stand up to the Ford government, and inspire the rest of the workers to follow suit. Ford is implementing a 1 percent wage cap on campus and public sector workers, which after inflation is a pay cut, and we demand the removal of the 1 percent cap. We must put student-worker solidarity at the heart of this movement.

There is strength in unity, and Ford has united many people against his government.

Therefore it is vital that we don’t just see this as a movement against Ford’s attacks on higher education, but rather as one component of the wider struggle to stop all of the Conservative attacks, bring down the Ford government, and fight for free education. The 2012 Quebec student strike had the result of bringing down the Quebec government of the day, and Ford has far lower popularity than that regime.

It is vital that we do everything possible to make the Ontario student strike a reality. We must demand that the Canadian Federation of Students and local student unions support, encourage, and where possible organise strike action. Strike committees can be formed on each campus to coordinate the struggle, and these must be organically linked to democratic general assemblies. Now is the time to strike. We do not have to accept these attacks. Ford can be defeated!

Stop the attack on student unions!

Bring down the Ford regime!