Ottawa was rocked on Wednesday by news that a lone gunman shot, and killed, a Canadian Forces reservist on Parliament Hill, before storming Parliament itself. This attack came just two days after a similar incident in Quebec. The fact that these two individuals recently converted to a fundamentalist form of Islam, and apparently expressed support for ISIS, has raised fears that Canada is now facing a wave of terrorist attacks. 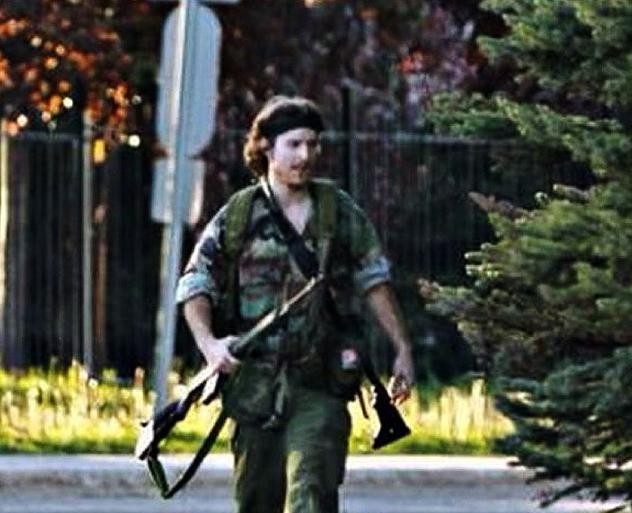 According to media accounts, Michael Zehar-Bibeau randomly drove up to the National War Memorial on Wednesday where he shot Nathan Cirillo, a reservist, three times. Zehar-Bibeau then quickly drove to Parliament Hill, entering Parliament, where multiple shots were exchanged with security staff. Two security guards were reportedly shot before Zehar-Bibeau was shot and killed by the sergeant-at-arms. The shootings occurred just metres from where both the Conservative and NDP caucuses were meeting.

As this was occurring, media reports suggested that there had been another shooting at the same time at the Rideau Centre, a busy shopping mall in downtown Ottawa. This immediately prompted fears that the shooting on Parliament Hill was part of a coordinated terrorist attack. Police quickly ordered a lockdown of the entire Ottawa downtown core. Eventually, police concluded that a second shooting did not actually take place and the lockdown order was lifted late in the evening.

Although such scenes of violence are not unknown in other countries, particularly those suffering from Western imperialism, this is not supposed to occur in “peaceful” Canada.  The attack in Ottawa comes just two days after Martin Couture-Rouleau allegedly sat in a parked truck outside of a Canadian Forces office in Quebec, eventually driving into two soldiers and killing one of them. Couture-Rouleau was later killed by police after a brief car chase. The mainstream media has been very quick to raise the spectre of a wave of Islamist terrorist attacks striking Canada.

According to a CBC profile, Couture-Rouleau had apparently converted to a radical form of Islam in the past year, posting messages and images celebrating ISIS on social media. He had told a friend that Canadian soldiers were “infidels”, and that “he was really mad that Canada actually supported the American bombing of [ISIS] in Syria and Iraq.” The federal government had become aware of Couture-Rouleau’s activities and believed that he was headed to the Middle East to join ISIS; in response, the government had seized his passport.

Zehar-Bibeau, too, may have come to support fundamentalist Islam, although there is also a possibility that his attack was borne out of mental illness. One report stated that Zehar-Bibeau’s father had been interviewed by the Washington Times in Libya, allegedly fighting for Islamist forces there in 2011. Zehar-Bibeau was also supposed to be travelling to Libya in the near future but his passport application had not yet been approved. According to the Globe and Mail, a friend of Zehar-Bibeau recounted of an incident with elders at his Vancouver mosque, where Zehar-Bibeau was asked to not return. Whether this was because of fundamentalist ideas or whether it was because of mental illness is not yet clear.

Why are young people being attracted to fundamentalism and terrorism?

Despite the similarities between the two attackers, there does not appear to be any direct connection between the two incidents. A former officer with Canada’s spy agency, CSIS, described the attack in Quebec as a “lone wolf” operation, conducted with little sophistication. The second attack may, or may not, have had anything to do with Islamism. Certainly, this does not appear to be the work of a coordinated terror campaign organized by ISIS.

In the wake of the shootings, there has been a string of jingoistic statements and speeches given by politicians and pundits, saying that “we must not give in” to the terrorists. A common refrain is that these people “hate our way of life”, but such simplistic analysis does little to explain why two Canadian-born men (and others like them) are increasingly becoming attracted to religious fundamentalist groups such as ISIS or driven to commit terrorist acts.

In fact, Canada has become a prime recruiting ground for fundamentalist groups like ISIS. A growing number of ISIS’ fighters come from Canada, including one of its key spokespeople on Twitter who is originally from Calgary. The RCMP estimates that in the past 18 months alone, 130 Canadians have left the country to “participate in terror activities abroad”. A large majority have since returned to Canada. In fact, Couture-Rouleau was one of 90 people who had been flagged by the RCMP as possibly headed to the Middle East to fight for ISIS and had had his passport suspended. Although Zehar-Bibeau had not yet been elevated to the same threat level, his passport application was also being held up for investigation.

According to apologists for capitalism, there is not much of an explanation for why individuals, especially younger people, are attracted to fundamentalism and even terrorism. Their explanations do not go further than simply stating that these individuals are “evil”, as if they were born with a special gene that turns them into terrorists. The real reason for the rise in fundamentalist groups is the terrorism of capitalism that increasingly marginalizes, atomizes, and isolates people into a spiral of hopelessness and despair. Many youth today find a future that provides little hope of steady employment, an opportunity to start a family, etc. In addition to this can often be added systemic racism and discrimination that pushes immigrant youth towards ideas and methods that answer the resentment and anger that they face on a daily basis. Those who suffer from mental illness are often unable to find, or afford, the treatment they dearly need. The end result is generally people being pushed to the absolute limit by a system that will not answer their needs.

The dead end of terrorism

Although it is important to understand why young people are turning to these abhorrent ideas and tactics, and to identify the root cause of this shift, Marxists are absolutely opposed to the methods of individual terrorism. Rather than bring about a (positive) change in society, all that individual terrorism does is to reinforce the power of the state and of the ruling class while weakening the collective unity of the working class.

In the case of Couture-Rouleau, one of the reasons cited for his attack on the two soldiers was the role played by Canadian imperialism in Iraq and Syria. As the Western countries increasingly interfere in places like the Middle East, some youth will be attracted to individual terrorist tactics in order to deal a blow to imperialism. However, instead of raising opposition to the latest Canadian war effort, all Couture-Rouleau’s attack has done is actually increase popular support for the Middle East bombing, under the justification that this will destroy ISIS’ forces. Already, the federal government is using the attacks in Quebec and Ottawa as an excuse to further attack civil liberties across the country. The Conservatives are planning to expand so-called “anti-terror legislation”; among the measures to be proposed are allowing Canadian security forces to pre-emptively detain terror suspects for a longer period than the 48-hours currently allowed by existing legislation. Furthermore, the new legislation would “lower the evidentiary threshold” required to formally keep a suspect in detention. Perhaps the most chilling prospect that may be contained in the Tories’ legislation is a proposal to charge any individual that is seen “justifying” or “glorifying” acts of terrorism.

In what way was the Canadian state, Canadian imperialism, or the system as a whole affected by the killing of two soldiers? In fact, the attacks have strengthened the Canadian state and given it added justification for attacks on workers, youth, the marginalized (especially those of Middle Eastern origin), and anyone else that opposes the interests of the ruling class. The attacks have given an opening to the federal government to crack down on any dissent to the bosses’ austerity program, all in the name of “national security”.

But the state’s crackdown on opposition will not bring the ruling class any peace, either. Ironically, all of these measures — from a renewed imperialist thrust in the Middle East to cracking down on anyone suspected of being a “terror” suspect — will only reinforce the isolation and marginalization faced by youth, likely leading to a greater possibility of terror attacks in the future. One sociologist is quoted as saying, “Encounters with police and intelligence agencies, on the other hand, only encourage their warped sense of victimhood and identity with terrorists.” This is the nasty vicious cycle that capitalism provides for us today.

A certain level of blame must be laid at the feet of the leadership of the labour movement, which has, around the world, failed to articulate an alternative future for angry and marginalized youth. In many countries, it has been the labour parties who have been responsible for some of the worst cuts and attacks facing young people, workers, and other marginalized communities. Even Canada’s NDP has been guilty of this as seen recently in Nova Scotia after the party was unceremoniously kicked out of office after four years of harsh austerity policies. Rather than seeing the unions and the labour parties as an option for activity, many youth can view these bodies as being part of the problem. It is little wonder, then, that the rage and hopelessness felt by youth can be misdirected into self-defeating dead-ends such as fundamentalism and terrorism. As the saying goes, “Nature abhors a vacuum.” In the absence of working-class leadership, their sense of marginalization must go somewhere.

The only answer to the danger of fundamentalism and terrorism is the fight for socialism. Even the more far-sighted wing of the bourgeois acknowledges that the fight against terrorism, under capitalism, may be lost:

“The number of murders in Ottawa was mercifully held to one, but there can be little doubt the gunman who invaded Parliament intended to kill many more… But we should not be surprised; neither should we think this will be the last such attack. It will happen again, and what is more there is nothing we can do to prevent it.

“If the past is any guide, the next days and weeks will echo to the sound of barn doors conspicuously slamming, for the greater prevention of flown horses. This will, and can, achieve nothing. If a couple of gunmen want to shoot up a shopping mall, or a public square, or an office block, they will. There is simply no way to block every door, board up every window, search every visitor.” (National Post, 23 Oct. 2014)

If a person is committed and desperate enough to commit such a heinous act, they will find a way to accomplish it.

What is needed is for the organizations of the working class to answer the desperate cry of the oppressed youth who see no future under this failed system — to answer the call for jobs, for assistance, for an end to war and imperialist domination of youth’s home countries. This is the only solution to the barbarism that is currently being unleashed upon us by capitalism.

No attacks on civil liberties and oppressed communities!

Socialist policies to answer the anger and discontent of youth!