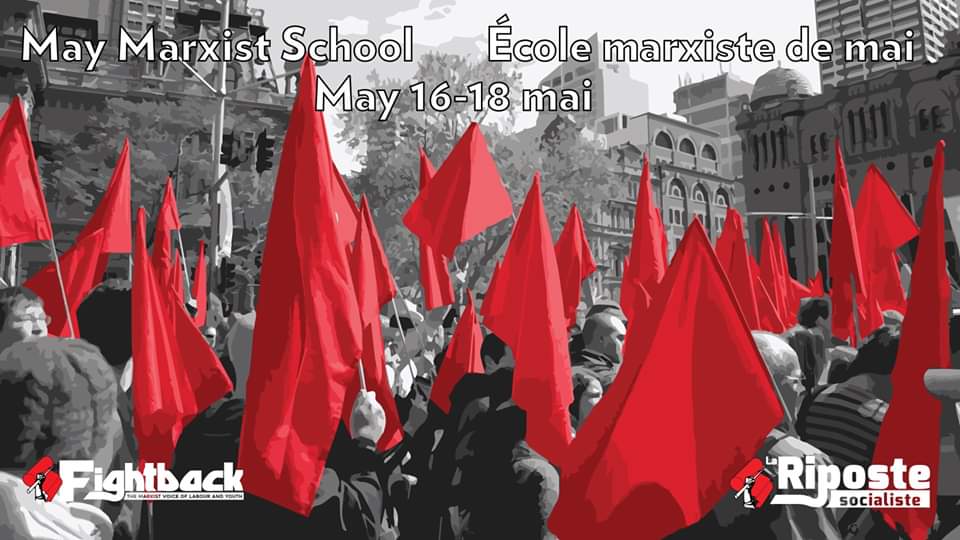 Normally during May supporters of the International Marxist Tendency (IMT) in Canada and Quebec organize an annual congress. Last year over 160 attended. The COVID lockdown forced us to cancel this face-to-face meeting, but the struggle continues. In its place, we organized an online Marxist school which was a resounding success. This bilingual event united Marxists from across the country and was the largest meeting the IMT has ever organized in Canada! More than 300 participated over three days, with approximately 250 attending at any one time. Faced with the greatest crisis of capitalism, the forces of Marxism are on the march!

COVID-19 and the crisis of world capitalism

On Saturday May 16, the school kicked off with Fred Weston, managing editor of In Defence of Marxism presenting on “COVID-19 and the Crisis of World Capitalism.” Fred began by explaining the absolutely unprecedented nature of the current crisis. Already in a weak state prior to the coronavirus pandemic, the world economy has now been sent off a cliff.

The repercussions of this crisis are seen at every level of our society with the capitalists now pushing to reopen the economy. Shedding all pretenses of caring about the health or well-being of workers, the bourgeoisie are now prepared to sacrifice millions at the altar of profit. Weston showed how this is having profound effects on the consciousness of the workers and youth who realize that there is one virus for the rich and another for the poor.

While this crisis has brought all of the contradictions of capitalism to the surface it has also simultaneously revealed the absolute bankruptcy of reformism. Faced with this crisis of epic proportions, the labour bureaucracy and reformists of all types rallied behind the government. Fred used the example of Britain, where the new leader of the Labour Party, Sir Keir Starmer has been unable to offer any significant opposition to the reckless measures pursued by Boris Johnson which has led to the UK being a hotspot of COVID-19.

Wrapping up the discussion, Fred explained that what we are confronted with today is socialism or barbarism. Increasingly capitalism is proving to be a giant fetter on the development of society and threatens to throw us into a state of barbarism. In many ways we already see this. Fred finished by appealing to all of the comrades present to focus on building the forces of the International Marxist Tendency.

Saturday ended with an evening fundraiser which was an incredible success. The fact that this was held online did not impede the comrades from rising to the challenge and raising almost double the amount raised last year! This success shows that the comrades understand the inevitability of the struggles to come and are willing to make the sacrifices to ensure the working class has the ideas and organization needed to fight back.

This bilingual event united Marxists from across the country and was the largest meeting the IMT has ever organized in Canada! More than 300 participated over three days

A Marxist analysis of the Great Depression

The Sunday session began with a presentation by Fightback editor Alex Grant on “A Marxist analysis of the Great Depression.” Alex began by repeating the old adage: “those who do not learn from history are doomed to repeat it.” What the current crisis shows is precisely that the capitalists have not learned anything from the experience of the Great Depression and are now repeating all of the errors.

After a period of war, revolutions, and a slump in 1920, the capitalists managed to stabilize the economy and ushered in a period of boom otherwise known as “the roaring 20s.” However, this was a speculative boom, much like the recent periods of growth we have seen. This created a massive bubble which eventually popped, leading to the stock market crash of 1929. Alex explained that the real material process that was behind all of this was that capitalism has entered into a period of decline and was saddled with a crisis of overproduction.

The prevalent idea among the ruling class was that of “laissez-faire” economics. They thought that if you just let the so-called invisible hand all on its own, with no state intervention, that the ‘free market’ would eventually recover. This led to a situation where unemployment shot up to 25 per cent. The economy circled downwards, declining year after year.

The social and political effects were massive. This was a period of huge turbulence which saw the rise and fall of political formations. Both the Cooperative Commonwealth Federation (the precursor to the New Democratic Party) and Social Credit find their roots as different attempts to find solutions to the problems posed by the crisis in society. The Canadian Communist party also played a significant role in organizing the On-to-Ottawa Trek in which thousands of unemployed workers traveled across the country to protest the Conservative government of Prime Minister R.B Bennett.

Alex wrapped up by explaining the difference with the situation today is that instead of leaving it up to the market, the capitalists are massively using the state to prop up the system. But this only compounds the crisis of capitalism with a crisis of debt. The question going forward will be: who pays? The capitalists are already trying to make workers and youth pay for this crisis and this is a recipe for one thing: revolution.

What are the productive forces?

The change from one socio-economic system to another has always been determined by the development of the productive forces. A point is reached when the maturing productive forces can no longer be contained within the old forms of property. A radical change in the social order follows accompanied by shocks. Today we are clearly witnessing a period in which the capitalist system is a fetter on the development of the productive forces and this is why we have entered a revolutionary epoch with such political radicalization and turbulence.

Rob finished by explaining that the boom-slump cycle is inherent to capitalism and has always been one of its key attributes from day one. However, this current crisis is not a simple slump but an organic crisis of a dying system incapable of developing the productive forces. Rob said that therefore we are straddling two different epochs in human history. One where capitalism was old, slowing down and getting sick and the period we are entering which is one of abject crises—social, political and economic crises.

Marxists are however not blind determinists. The objective situation in which the main factor is the development of the productive forces (or stagnation and decline) simply determines the possibilities of human action within a certain framework. What this means is that the decay of capitalism only creates the conditions for the transition to a socialist society which will unshackle the development of the productive forces.

In order for this transition to take place, what is required is a revolutionary organization to lead the main productive force—the working class—to overthrow this rotten system. It will then be possible to usher in a new era of harmonious human development, free from exploitation, oppression and war.

This is precisely what Fightback and the International Marxist Tendency are fighting for. We have been growing by leaps and bounds in the recent period but we need your help. Please join us!